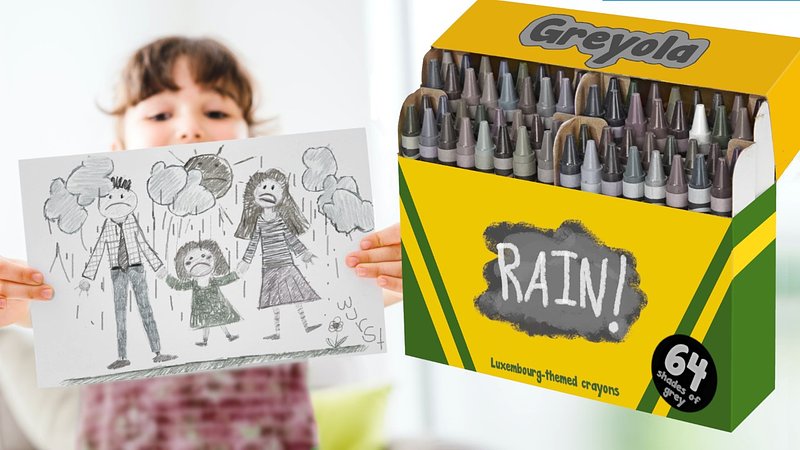 Calling it an opportunity that should have been seized a long time ago, Crayola has released a set of Luxembourg-themed crayons that consists only of shades of grey.

The company came up with the idea after being contacted by a Luxembourg City father who complained that his child was using her usual set of Crayola crayons to produce offensively inaccurate depictions.

“That little pip-squeak runs into the living room while I’m watching football and shows me a drawing of blue skies, rainbows, and a smiling family in colorful clothes,” Lars Peckman said of his daughter Lizbeth. “I said, what the hell is that?”

“The kid tells me it’s us,” he continued. “And I say, that ain’t us, that looks more like a meditation camp in Tahiti.”

“Personally, I never wear any color other than grey between October and April,” he added. “Same goes for my wife who even wears grey-colored contact lenses during the winter to mask her bright green eyes.”

After Peckman wrote an email the head of Crayola, the company, eager to cater to a market with plenty of disposable income to spend on children’s art supplies, sent a representative to Luxembourg to get a feel for it.

“It only took me five minutes and I understood,” said Crayola representative Samantha Lime. “I arrived at the train station on a cold, rainy Tuesday morning, and I immediately fell into a trance.”

“In an instant, I understood the very quintessence of grey,” she continued. “Grey commuters in grey clothes wearing grey expressions under a grey sky.”

“I became one with the tone, and like a practitioner of some Eastern religions, I understood that the middle path, neither black nor white, neither light nor dark, is the right path.”