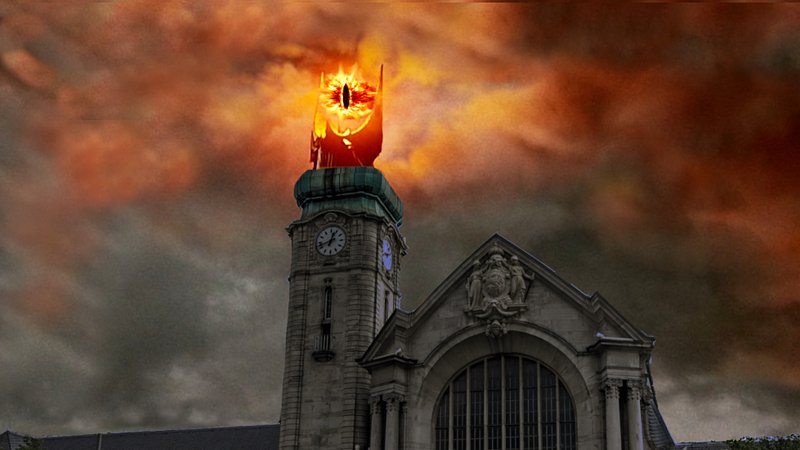 In response to increasing acts of aggression and criminality in Luxembourg City’s Gare district, the VDL has announced it will install a fearsome Eye of Sauron above the train station.

The Eye, composed of equal parts fire and fury, will be suspended between two giant prongs, and ideally it will keep people in the area in a constant state of fear.

“The Eye will be all-seeing and all-knowing,” said chief designer Gilles Saruman. “Whether you’re a commuter running to catch the 7:16 p.m. train to Metz, or you’re a street person barking at strangers, you won’t be able to hide from it.”

People who engage in obnoxious behavior such as littering or blocking the sidewalk will get a simple but menacing look from the Eye, Saruman says.

For those who commit minor infractions like peeing in public or trying to sell hash to people at cash machines, the Eye will dispatch a band of snarling Orcs to intimidate them.

“Actual criminal acts such as necklace-snatching or shoplifting will be dealt with more harshly,” Saruman said. “The Eye will send a band of Nazgûl, or Dark Riders as I prefer to call them, to surround and terrorize an offender, all while respecting the law, of course.”

However, not everyone believes that installing an Eye of Sauron will actually help to keep order in the Gare district.

“People stare at me all the time, and it doesn't bother me,” said Bob Dolt, 16, who plays loud music on a little speaker whenever he uses public transport. “I’m not scared of another eye, no matter how big or evil it is.”

Other residents are skeptical that VDL officials will be able to secure enough funding for the plan.

“The two giant prongs will have to be made with Dwarven steel, which is really expensive and has to be sourced from Middle Earth,” said Viktorka, a 34-year-old accountant and aspiring fantasy novelist. “And how do they expect to keep the Eye burning? They’ll need something much stronger than regular fuel.”

“The Orcs are also problematic,” she added. “They eat a lot. They don’t know how to use toilets. They tend to break things. The cost of insurance alone will be astronomical.”