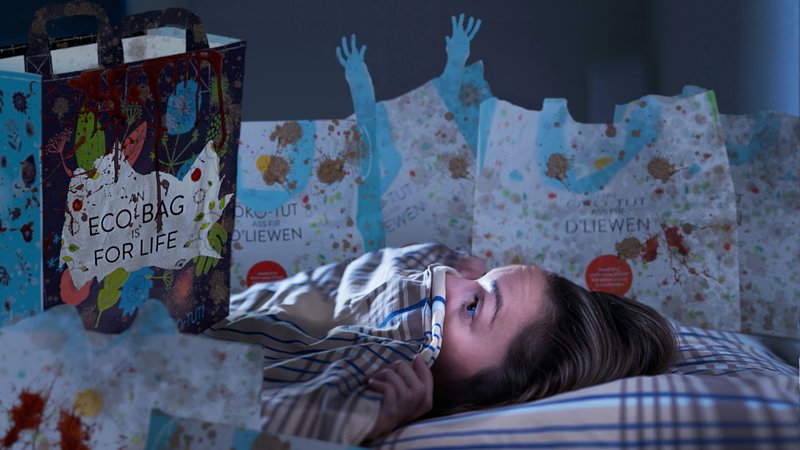 The incident occurred on Wednesday night, says Liddy Corral, who estimates she’s discarded at least 300 of the items since moving to Luxembourg in 2015.

Hundreds of eco-bags that a Luxembourg resident has thrown away over the years have come back to terrorize her, according to the horrified woman.

The gunk-covered receptacles, buried under tons of rubbish, became animated just before midnight and rose from what was supposed to be their final resting place, according to a landfill employee.

“They started growling clever, rhyming environmentalist slogans and saying they wanted revenge,” the man said. “I always take my extra eco-bags to the recycling center, so I knew I was safe.”

It’s believed the mob of zombie sacks found the motorway and limped and crawled approximately 10 kilometers to Corral’s home.

Corral says she was deeply asleep when she was awoken by an awful noise in her bedroom, like “some creature with creaky joints folding and unfolding plastic bags again and again.”

“I opened my eyes and saw them, all of the eco-bags I’ve ever snuck into the rubbish bin while hoping that my neighbors wouldn’t see me,” she said.

One particularly fearsome sack covered in a substance resembling rotten ketchup kept hissing, “An eco-bag is for life,” she says. Another, its normally flaccid handles transformed into claws, moaned, “You promised you would never forget me.”

Although she knows that the items are meant to be reused in order to reduce plastic waste, Corral cites forgetfulness as the reason why she never brings her eco-bags back to the supermarket and instead always buys new ones.

“But these vengeful totes said they don’t care about my memory problem, which by the way is very real and is also why I have to consult my phone when people ask for my number,” she said.

Although the eco-bags vowed to come back every night until Corral changes her ways, by Thursday morning she had already bought a new eco-bag after making an early-morning stop at the supermarket, according to sources.