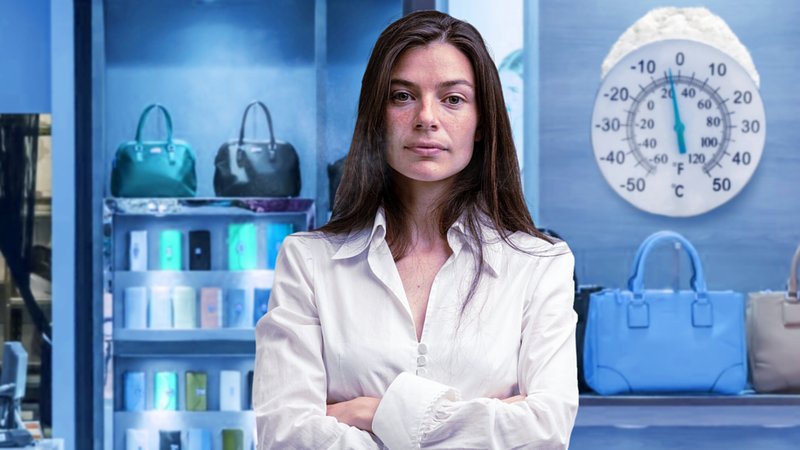 A shop on the Grand-Rue that specialises in designer accessories has become an impromptu refuge from the extreme heat, thanks to a saleswoman named Judith whose icy personality is now serving a purpose.

“I was walking along the Grand-Rue, wiping the sweat from my scorched face and wondering if this is what hell is like, when I was hit by a blast of frigid air coming out of a boutique,” said one relieved shopper on Thursday. “I’d been there before and I swore I’d never go back because the service was so awful, but I couldn’t resist stepping in just to cool down.”

The shopper says that once she was inside, she was met with the glacial stare of the same saleswoman who had treated her so badly once before.

“I made a stupid joke, something about how their air-conditioning unit should get a sales commission, but not surprisingly the woman didn’t respond,” the shopper said. “I stepped closer, thinking she hadn’t heard me, and it was then I felt the temperature drop by a further 10 degrees. The cold was coming from her.”

Within minutes, the shopper says, the boutique was filled with other overheated pedestrians who were lured in by the low temperature, which she says felt like being in a walk-in refrigerator.

While the shop’s owner admits she’s delighted with all the new potential customers, she doesn’t want word to get around out of fear that hordes of heat-stricken residents will storm in and cause the floor to collapse. As for her and the rest of the staff, the owner says they’re already used to the Arctic-like ambiance.

“When I hired Judith last month, her cold and totally unpleasant demeanour even gave me the chills,” the owner said. “It’s not that I’m opposed to greeting customers with a frozen stare and an unenthusiastic bonjour that’s suggestive of disdain, and in fact I encourage that sort of behavior because it helps with our branding.”

The owner says that she’s already in negotiations with VDL officials to rent Judith out to the city during future heat waves.

“They’re talking about placing her on a rotating metal plate in the middle of the Grand-Rue, because that way her coldness will emanate and cool everyone down for kilometres around.”