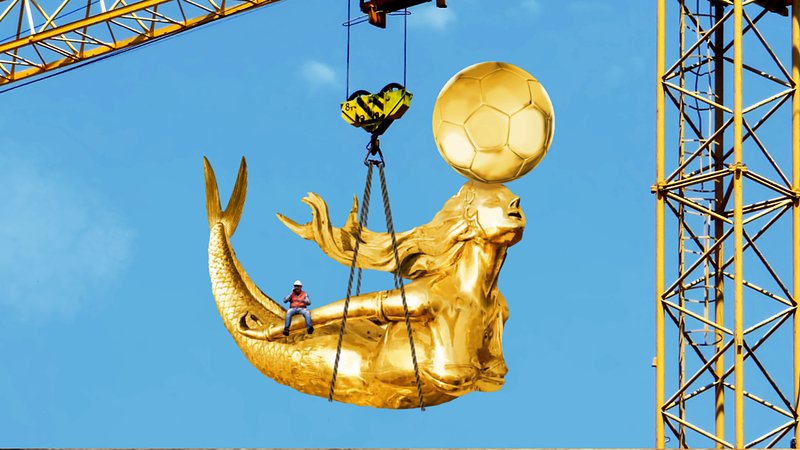 Luxembourg’s new football and rugby stadium, which is being built in Cloche d’Or and will be completed by 2020, has received its artistic centerpiece, one that officials say will speak to the country’s robust economy.

The sculpture, named “Golden Melusina and a Giant Golden Football,” was inspired by the mythical half-woman, half-fish creature who according to legend was briefly married to Siegfried, Count of the Ardennes and founder of Luxembourg.

The golden Melusina weighs several hundred tonnes and is 19 meters tall, and it’s rumoured to have cost 18 million euros.

“This golden Melusina is headbutting the ball forward into a bright future of endless wealth and happiness for all the residents of the land,” said Franck Butnum, the artist who created the sculpture and oversaw its delivery on Wednesday.

Officials say that once Melusina is installed at the eastern end of the stadium, she will be rigged to an elaborate pyrotechnics system that will permit engineers to shoot fire from her mouth.

“When our boys or girls out there score a point, we’ll light this baby up and she’ll turn the stadium orange with celebration,” said Jang Foussmann, one of the project’s chief designers. “We’ll have Melusina fixed to a giant rig so if we win a match, we can tilt her back and she’ll shoot a giant flame 60 metres into the night sky, and all the neighbouring countries will look at us with awe and envy.”