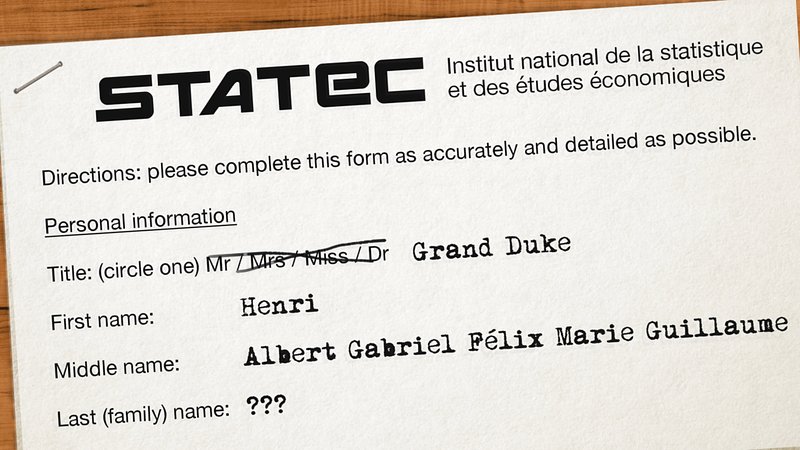 A routine visit from the national statistics agency STATEC to Berg Castle this week has left Luxembourg’s Grand Duke Henri embarrassed after the monarch realized that he doesn’t have a last name.

“Just to verify, your first name is Grand, your middle name is Duke, and your family name is Henri?” the young interviewer asked on Wednesday, according to sources.

“No, my first name is Henri, and Grand Duke is my hereditary title,” replied the Grand Duke.

“So, what’s your last name?” the interviewer said. “It looks like somebody made a mistake. I don’t have it here on my paperwork.”

Somewhat embarrassed, the Grand Duke offered “of Luxembourg,” but the interviewer shook her head and said that was His Royal Highness’s country of residence.

The now flummoxed head of state then excused himself under the guise of needing some fresh air. After a frantic search through his personal documents and a few minutes scanning the Wikipedia entry about himself, he returned and gave the last name that seemed most plausible, incidentally the most common one in the Grand Duchy: Schmit.

“No, that doesn’t appear to be it,” the interviewer said after entering “Grand Duke Henri Schmit” into a database. His Royal Highness tried the next two most common Luxembourgish last names, Weber and Muller, and then meekly offered more notable ones such as Schleck, Juncker, and even Bofferding. None of them worked.

The interviewer apologised profusely and said that, without a last name to match the profile, she was obliged to withhold the customary 20-euro payment that is offered to respondents for their participation. The Grand Duke allegedly sighed and promised to find his last name before next year’s visit.