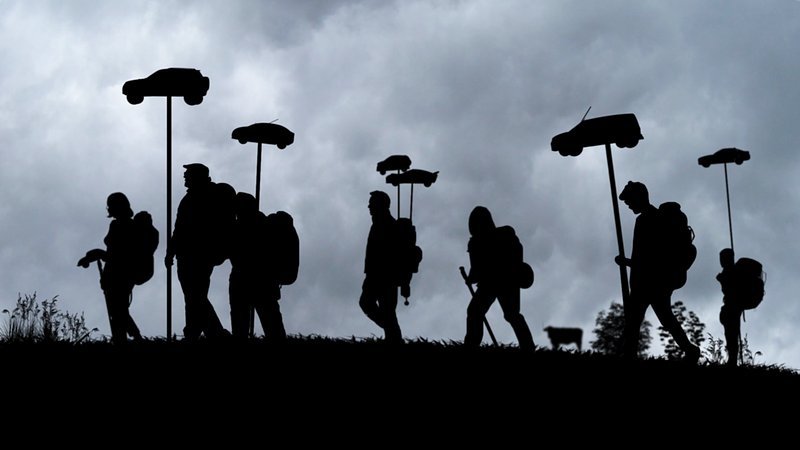 Travelling by foot from as far away as Brussels, thousands of car worshippers are flocking to Luxembourg this weekend for the start of the annual celebration known as the Autofestival.

The festival, which is held around this time every year and has its roots in Roman chariot worship, is one of the most important religious observances for the Grande Région’s estimated 250,000 devotees.

Dillan Huart, a 24-year-old pilgrim from a village in deep Lorraine, departed with two friends more than two weeks ago. By his estimate, this is the sixth time he will have made the journey.

“We make this walking trek to honour Auto, god of individual mobility, born of Ferro, god of steel and Petrolia, goddess of carbon fuel,” he said. “Also, I’m looking for a good deal on a 2015 Peugeot 206.”

Using his right hand, he made a pious gear-shifting gesture before chanting “vroom vroom” and continuing down the well-worn path.

Joined by her husband Marcus, Luxembourger Sonia Platz, 39, departed last Friday from their home, just over the border in Konz, Germany. She says that paying respect to Auto is important to show our deep appreciation for cars.

“In the past, when Auto was displeased, he implored his mother to cause a great petroleum draught in which all the world’s oil wells ran dry,” she said. “And he begged his father to send the trickster metallurgist Stannum to turn all the steel to tin. Car drivers were forced to ride bicycles or worse — use electric scooters.”

“My family is growing,” she continued. “We have four children, and a baby on the way. It is time for the sacred rite of purchasing a large family vehicle. We seek a used Mercedes Vito that can hold up to seven people.”

While in recent years some non-believers have dismissed the event as outdated and founded on superstition and myth, believers continue to cite amazing price reductions of up to 30 percent, on all new and used models, as proof of Auto’s existence and power.