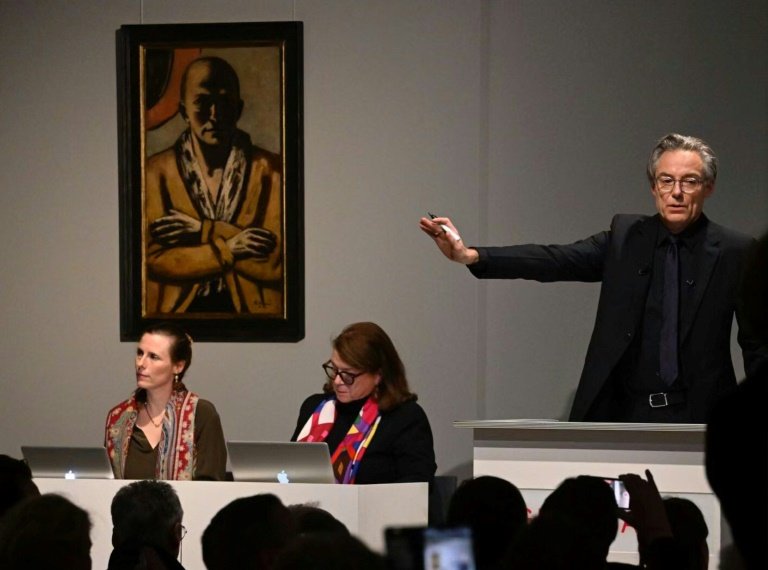 The picture had been in a private Swiss collection for decades, and not shown in public since the mid-1990s / © AFP

A self-portrait by expressionist artist Max Beckmann smashed the record price for a painting sold at auction in Germany, when it was put before buyers in Berlin on Thursday.

Beckmann's work, which features the artist during his Dutch exile from Nazi Germany, is widely considered a masterpiece.

The sum was "the highest price that has ever been offered for a painting", auctioneer Markus Krause told the room to applause.

Including fees, the price of the self-portrait will come to 23.2 million euros, according to the auction house Grisebach.

The previous German record was set in 2018 by another of Beckmann's works, "Die Aegypterin" (The Egyptian Woman), which fetched 4.7 million euros.

The record price for a painting by the artist was set in 2017 when his work "Hoelle der Voegel" (Bird's Hell) -- among Beckmann's most important anti-Nazi statements -- sold at Christie's in London in 2017 for £36 million ($46 million at the time).

Beckmann's self-portrait was initially a gift to his wife Mathilde, known as Quappi, who kept it until her death in 1986. The picture had been in a private Swiss collection for decades, and not shown in public since the mid-1990s.

The painting was displayed behind glass at a public preview ahead of the auction to guard against vandalism by climate activists who have recently been targeting artworks.

Beckmann (1884-1950) enjoyed massive acclaim in Germany during his lifetime, with top dealers placing his work with private collectors and major institutions.

That was until the Nazi regime labelled his daring, politically charged art "degenerate" and removed his paintings from German museums in 1937.

Professionally thwarted and increasingly under threat, Beckmann left for Amsterdam, where he lived in self-exile for a decade before moving to the United States.

Beckmann would ultimately die in New York at the age of 66, of a heart attack on a sidewalk on his way to the Metropolitan Museum of Art.

Paintings by Beckmann, now considered one of the most important artists of the 20th century, have exploded in value in recent decades.

The most paid for an artwork this year was $195 million, for an iconic portrait of Marilyn Monroe by American pop art visionary Andy Warhol.

The bumper price tag is the second largest all-time behind Leonardo da Vinci's "Salvator Mundi", which sold in 2017 for $450.3 million.