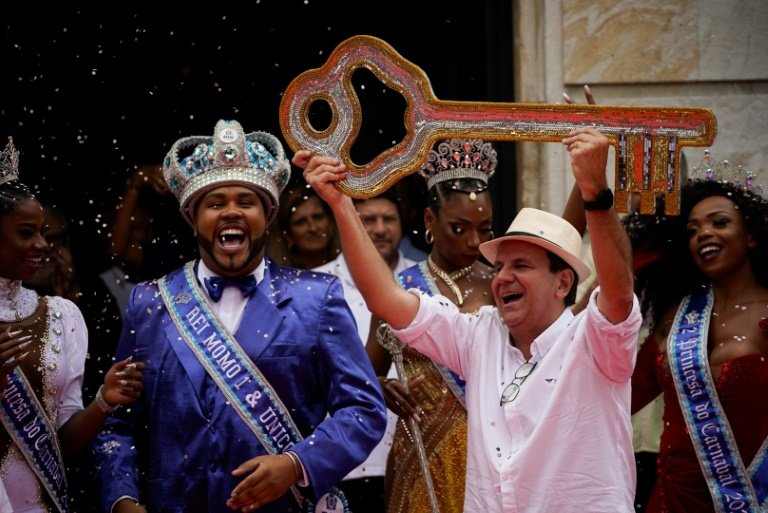 After two years of Covid-19 cancellations, Rio de Janeiro's mayor officially opened the world's most famous carnival celebration Wednesday, handing the key to the city to "King Momo," the symbolic ruler of the festivities.

"I proudly announce the greatest show on Earth is back: long live carnival!" Mayor Eduardo Paes told a cheering crowd at city hall, handing a giant golden key over to the jovial "monarch" as confetti rained down on them.

Tradition has it King Momo, who is chosen by a jury with input from a popular vote, rules Rio for carnival, presiding over the glittering, sequin-studded spectacle of the city's all-night samba school parades.

Decked out in a shiny blue tuxedo and jewelled crown, Neto accepted the key with a grin.

It was a welcome change of tone from last year, when Paes symbolically handed the key to a pair of health workers in white lab coats and surgical masks after announcing carnival had to be canceled because of the pandemic.

Covid-19 has claimed more than 660,000 lives in Brazil, second only to the United States in absolute numbers.

But with more than 75 percent of the South American country's 213 million people now fully vaccinated, the average weekly death toll has plunged from more than 3,000 a year ago to around 100 now.

Last celebrated in February 2020, carnival again looked uncertain this year when fears of a new wave led city authorities to postpone it from the usual dates, just before the Catholic season of Lent.

But two months later, the show is set to go on.

The samba school parades will open Wednesday, with the highly competitive top-flight league scheduled for Friday and Saturday nights.

City officials have not authorized the massive carnival street parties known as "blocos," but several smaller ones are still expected to be held.

Carnival moves some four billion reais ($800 million) for Rio's economy and creates at least 45,000 jobs, according to official figures.