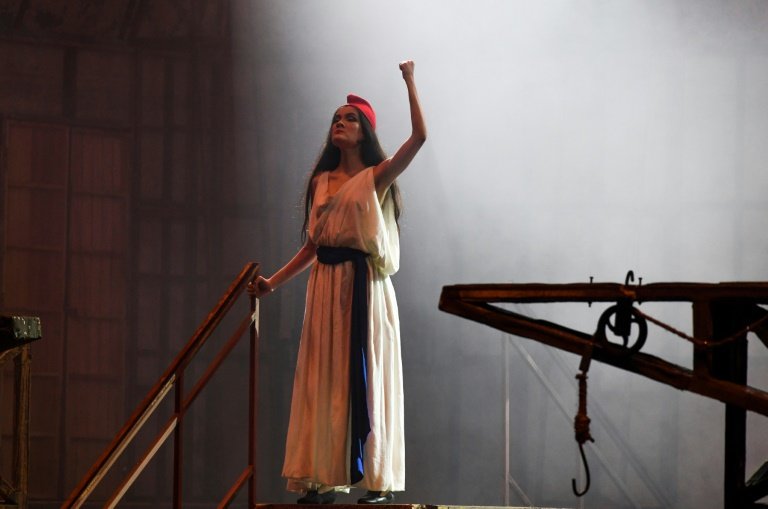 The angry, oppressed citizens are actors and their caps and overcoats evoke 19th-century France rather than modern-day Venezuela.

But local people going to the theater to see a new performance of "Les Miserables" in Caracas could be forgiven for thinking this show was about them.

In a country deep in economic crisis, getting the show on the stage was a heroic feat almost on the scale of the epic novel it is based on.

"It was an act of rebellion," said producer Claudia Salazar. 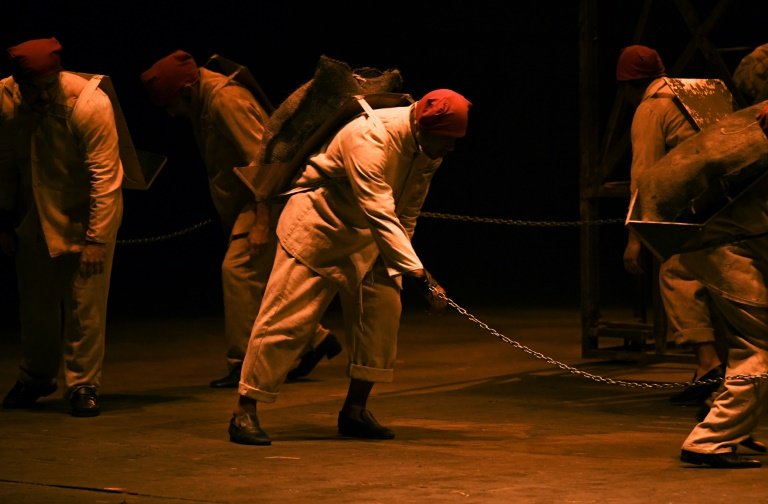 "Les Miserables" is a call for liberty and social justice / © AFP

The social injustice in Victor Hugo's 1862 novel -- and songs such as "Do You Hear the People Sing?" and "I Dreamed a Dream" -- resonate with Venezuelans.

"It's a real classic, so it could be adapted to any period," said one woman who came to see the show, Gabriela Oropeza, 43, a filmmaker.

"But for us right now, it is marvelous to see a show like this," she said.

"This is a momentous event for our country, with a magnificent message, very much suited to the social reality of the moment." 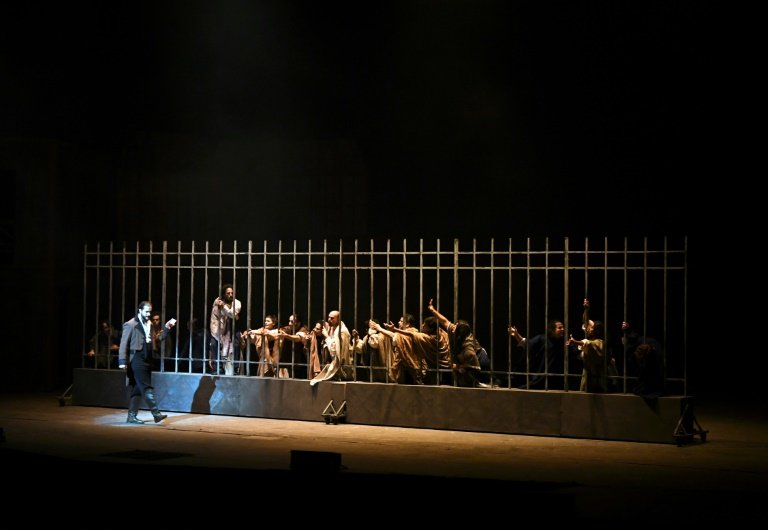 Salazar said she fell in love with "Les Miserables" when she first saw it two decades ago on stage in New York.

Many people said she was "crazy" when she applied for the rights to stage it in her native country.

She spent three years securing sponsorship from private companies to finance the show.

Then her team had to cast it, rehearse it and build giant sets -- all in a country suffering shortages of cash, food and basic supplies.

After seeing the audience jump to their feet to applaud the cast, she observed: "The craziness is contagious."

"We are resisting and trying to be rebels, faced with a situation that threatens to knock us down." 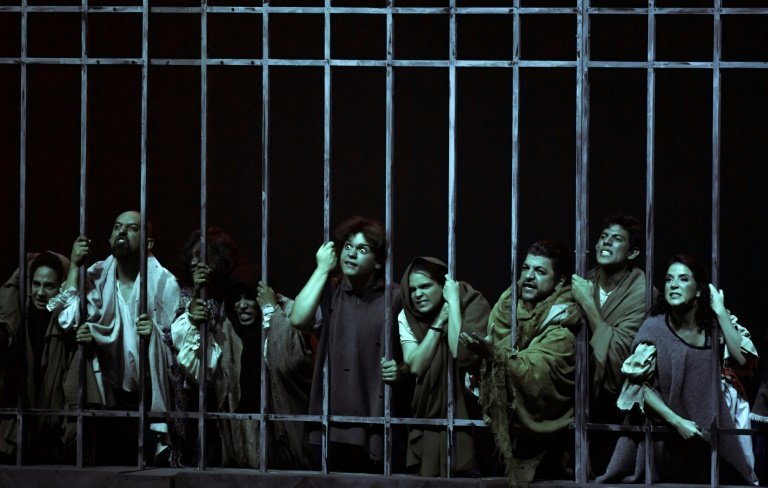 Founded in 1983, the Teresa Carreno state theater used to be considered one of the top theaters in Latin America.

But artistic life there had all but ground to a halt in the crisis.

Its seats are stained and maintaining the building is tricky.

It has lately been more often used to host pro-government political gatherings than plays, dance or music.

The state allowed the producers to use the theater for their "rebellious" show, however.

The producers fixed the air conditioning, but still had to reduce the capacity of the auditorium from 2,500 to 1,400 for it to function properly.

"Les Miserables" has reminded the public what the theater used to be like before the country was stricken by poverty and high levels of violent crime.

"This is like living in a normal country," said one audience member, Ricardo Skenazi, a 21-year-old student. "Just for a moment." 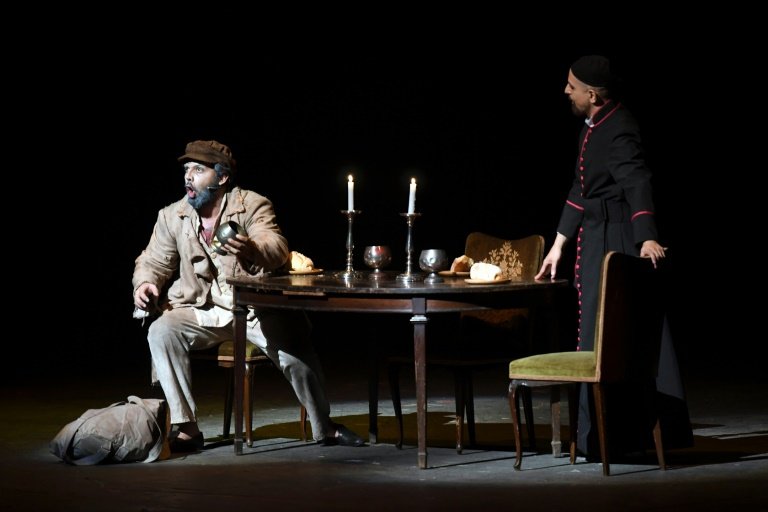 Venezuelan audiences "identify deeply" with the show, said one of the members of the all-Venezuelan cast, baritone Gaspar Colon.

At $30 to $65, tickets cost at least double the minimum salary in a country crippled by inflation.

But for those who can afford it, a few hours in the theater offer a respite from their own economic and political crisis.

"Horrendous things may be happening" in the country, said Colon. "But marvelous things are happening too." 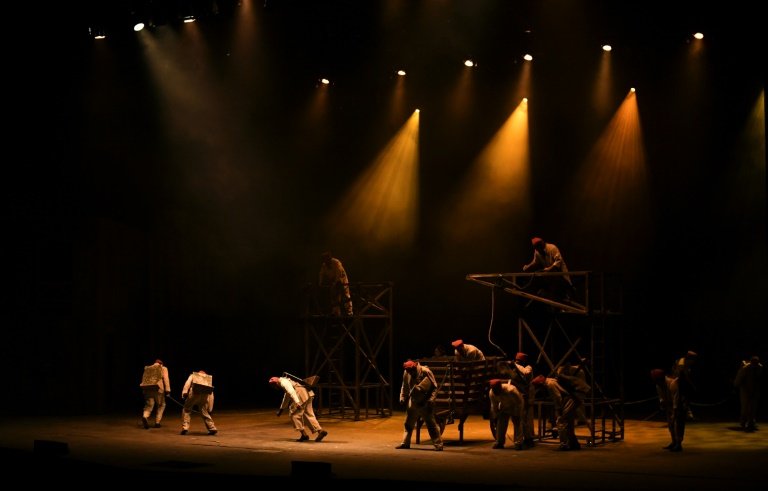 When angry students set up barricades on stage, it is more than a historical curiosity as it might be for an audience in London or New York.

It is a sight Venezuelans are used to from the recent years of street protests against President Nicolas Maduro.

"The first rehearsals were enormously emotional. We were crying," said performer Mariana Gomez. She plays the part of Madame Thenardier, one of the hapless citizens caught up in the drama.

For her, the barricade scene, when the rebels of Paris are massacred, was the most painful of all.

That was close to the bone in a country where some 200 people have been killed in protests since 2014.

"That really moved us," Gomez said. "A lot of people are suffering."

Yet the story of Valjean's redemption signals hope for a happy ending.

In Victor Hugo's vision, Gomez said, "there is always hope."