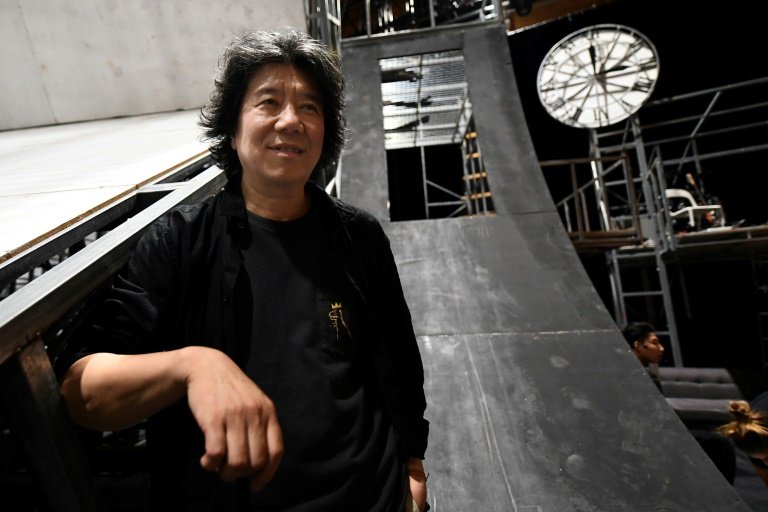 Storm in a teacup: Chinese director Meng Jinghui on the huge set of his controversial version of the classic play "Teahouse" at the Avignon theatre festival in France / © AFP/File

Dozens of people have walked out of a challenging new version of a classic Chinese play staged in France since Tuesday under a huge four-tonne wheel symbolising history crushing the Chinese people.

Lao She's epic "Teahouse", which recounts the tumultuous first five decades of the 20th century through three generations of a Chinese family, was one of the most hotly anticipated shows at the Avignon festival.

But the new version of the saga about social injustice, hunger and corruption took a critical bashing with French daily Le Monde comparing its "over-the-top special effects" and live Chinese rap and techno music to something that one might see in a "naff stadium rock opera".

Pioneering Chinese director Meng Jinghui -- who described himself "a bit of a rebel" -- is one of the first to dare to overhaul the text since it was first staged in 1958.

Lao, one of the first victims of the Cultural Revolution, is a mythic figure in Chinese theatre.

Meng told AFP before Tuesdays premiere that "you have to change, take a new look... The version created by (director) Jiao Juyin in 1958 was excellent but it is a bit outdated. No one dares to touch it and when it is performed in Beijing it still pretty much plays to full houses."

Lao is seen as something of an artistic martyr, and a symbol of the talent lost during the Cultural Revolution. 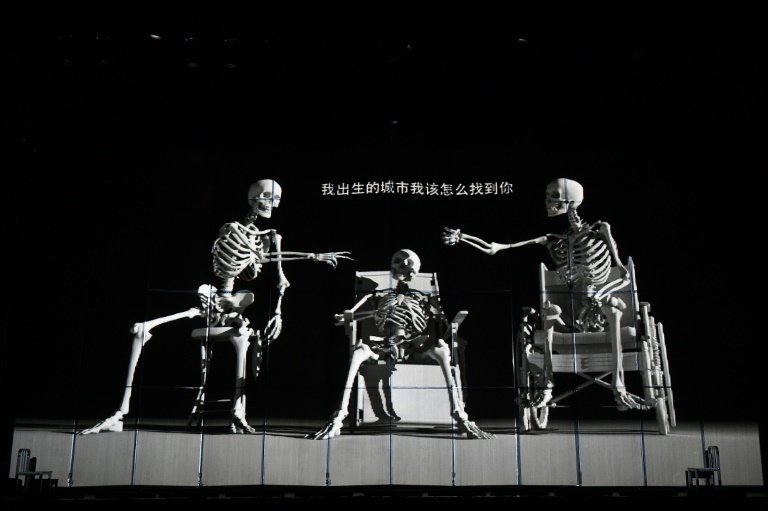 The daring new version of "Teahouse", staged in Avignon, comes at a time when government scrutiny and censorships of the arts and the entertainment industry is tightening under President Xi Jinping / © AFP/File

His death in 1966 remains shrouded in mystery, with many contesting the official account that he killed himself after being humiliated and paraded through the streets by Red Guards.

"Lao She has a soft spot for each individual. There are many little people in the play, each with their own dreams, imagination and fantasies," the 54-year-old director said.

Meng said he wanted to explore the relationship between collectivism and individualism.

The daring new version of "Teahouse" -- which will tour China later this year -- comes at a time when government scrutiny and censorships of the arts and the entertainment industry is tightening under President Xi Jinping.

A push for more Communist Party-friendly content has seen regulations introduced that require filmmakers to be handed a "dragon seal" of approval before films may be screened at festivals abroad.

One of the country's most famous directors, Zhang Yimou, the maker of "Raise the Red Lantern", was forced to withdraw "One Second" from the Berlin film festival in February.

Lao She's epic "Teahouse", which recounts the tumultuous first five decades of the 20th century through three generations of a Chinese family, was one of the most hotly anticipated shows at the Avignon festival in southern France / © AFP/File

Another Chinese movie, "Better Days", that had also been scheduled to show in the German capital, failed to get the go-ahead in time from Beijing.

At the Cannes film festival in May, the premiere of "Summer of Changsha" went ahead despite the unexplained absence of its production team.

"Artists are like children -- they need to express themselves," Meng told AFP.

"Of course there are lines that should not be crossed," he added. "But that doesn't mean we shouldn't keep on creating."

Meng insisted that Chinese theatre is actually becoming "very dynamic and is asking lots of questions".