The Duke of Wellington outside of the Gallery of Modern Art. Capping the statue with traffic cones has become a cherished pastime. / © Chantal Lorang

Glasgow has come a long way since it put a definite end to its reputation as Europe’s “murder capital.” Should you visit Scotland’s cultural powerhouse? This question can only be answered with a resounding AYE!

Cities who witness as profound a transformation as Glasgow are few and far between. Once feared for its epidemic booze-and-blade culture, Scotland’s unofficial capital has been crowned the world’s friendliest city by Rough Guides in 2016. And the city’ slogan “People make Glasgow” could not be truer…

Do consider catching a cheap Ryanair flight from Charleroi Airport to avoid costly connection flights. You can either fly directly to Glasgow airport or to Edinburgh airport (and take a shuttle bus to Glasgow city centre). In November, Ryanair also announced a new route between Luxembourg and Edinburgh, commencing in April 2019. Once you’re in the city, you should be able to reach most places on foot. If walking doesn’t float your boat, use the subway or the — by Luxembourgish standards — extremely affordable taxis.

Don’t forget to take umbrella and waterproof clothes. Scottish weather is treacherous – even if it looks sunny when you leave, it may start raining cats and dogs five minutes later. In the somewhat unlikely event that the sun is out, don’t be surprised when males all over the city start taking their outer garments off. “Taps aff” is the native Glaswegians’ natural response to vitamin D exposure.

Get the weather terminology right. / © UpNextStudios/YouTube

Don’t miss the city’s impressive architecture. The multitude of historical buildings speak a thousand words. Glasgow Cathedral for example is the oldest cathedral on mainland Scotland and the oldest building in Glasgow. On a hill to the east of it lies Glasgow necropolis, a Victorian cemetery modelled on Père-la-Chaise in Paris. Sculptures and other architectural gems abound.

Do check out Glasgow’s street art, which has achieved international fame on social media. If graffiti is your thing, consider embarking on the city centre mural trail: it will bring you to some of the most fascinating pieces of urban art Scotland has to offer. 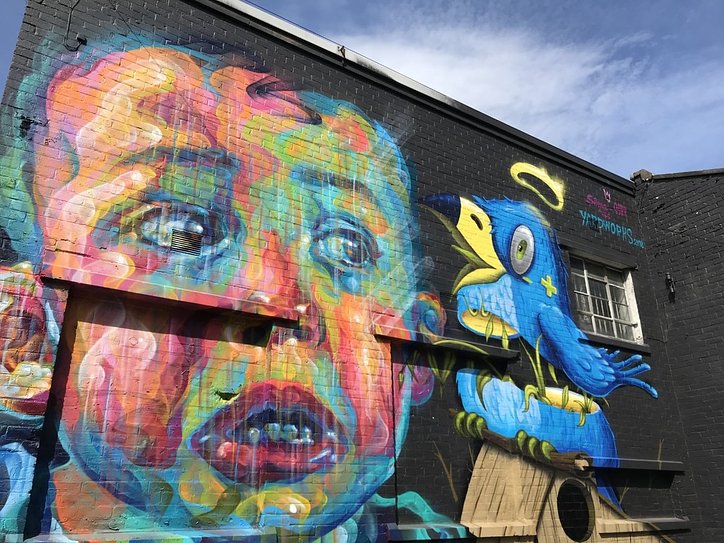 Do go to the West End and explore Hogwarts aka Glasgow University (see gallery below).

When you’re roaming around the city, do also pay attention to the street names – they often hide interesting stories. “Jamaica Street” near Central Station for example reminds of Glasgow’s connections with the Empire and its darker past. Many Glaswegian merchants prospered because of slave labour in plantations in the West Indies and Jamaica in particular.

Glasgow’s positive evolution over the last decades is also a culinary one. In the words of food blogger Pam Gilmour, the city’s gastronomic scene went from “bland and uninspiring” to a “thriving” culinary hotspot. Whether it is Indian food at “Mother India,” Italian pizza at “Paesano” or fine dining at “Six by Nico,” there should be something to plunge everyone’s taste buds into ecstasy.

However, do also try some of the most iconic dishes of Scotland’s famously unhealthy diet. Do treat yourself to Scotland’s “walking heart attack”: the deep-fried Mars bar. The chocolate bar is fried in chip shop batter and yes, it is allegedly able to raise the risk of having a stroke within minutes. Delicious all the same. Fried pizza slices are also a thing.

Speaking of calorie bombs, enter the 5,000-calorie “Munchie Box,” a pizza box stuffed with doner meat, chips, and everything deep-fried you can possibly imagine. According to a writer for online magazine Vice, it is able to destroy your insides. 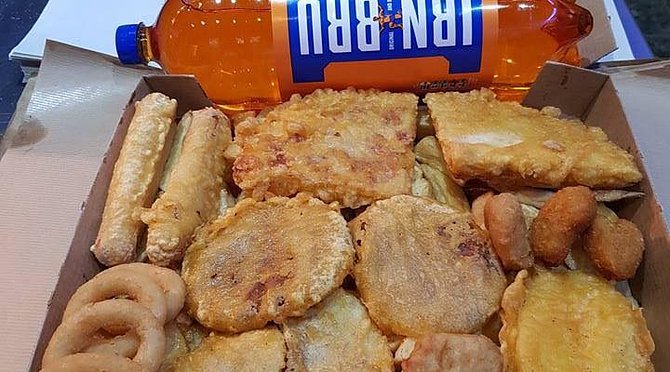 The one and only Munchie Box, complete with king-size Irn Bru bottle. / © East West Spice Greenock

And to wash it all down? Scotland’s national drink of course! No, not whisky (we'll get some of that too), but the one and only Irn-Bru. The luminous orange beverage is Scotland’s best-selling soft drink, ahead of Coca Cola. Glaswegians will swear it cures hangovers and they were seriously upset when Barack Obama tried the sugar-free version during a visit in 2017. Fun fact: the drink was even banned in Canada because of the additives it contains.

Shopping, going out… and avoiding a Glasgow smile

Do go out while you’re in the city. Edinburgh may have the Fringe Festival but Glasgow has the better night life. From comedy clubs like “The Stand” to cosy pubs to pulsating clubs like “Sub Club,” there should be something for everyone. However, don’t drink in public and plan in advance: it’s illegal for shops to sell alcohol after 10 pm.

Don’t order half a pint. It’s disgraceful to many Scots.

Buchanan Street and Sauchiehall Street in the city centre are Glasgow’s obvious shopping destinations. However, don’t miss the West End with its cosy Ashton lane and vibrant Byres road. Nearby also lies Otago Lane, which is home to personal favourite Voltaire & Rousseau bookshop. Disclaimer: if you’re a neat freak, don’t visit the shop. 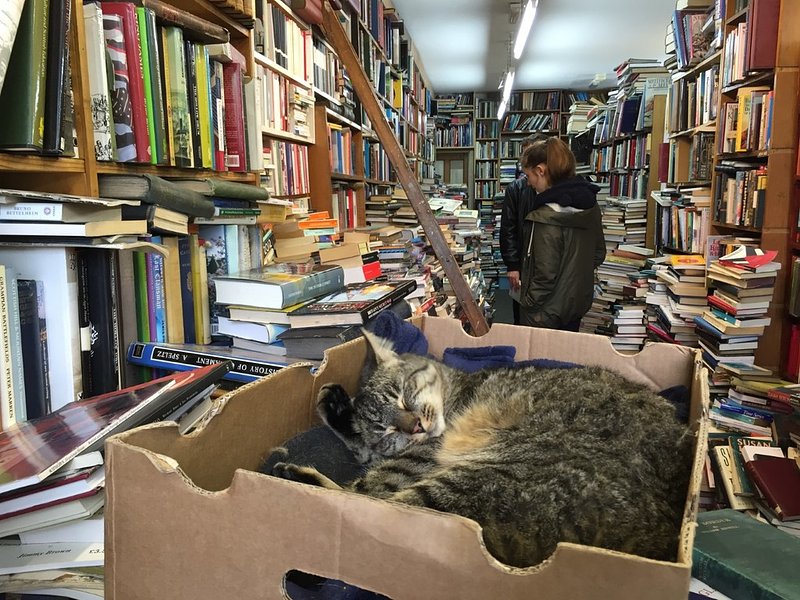 Do let loose during a ceilidh, a traditional social event with folk music, singing and dancing. Many pubs regularly host them. If you’re making local friends, don’t expect to understand what they’re saying – even if you’re absolutely fluent in English, understanding the Glaswegian accent is a tricky enterprise.

Speaking of Edinburgh, under no circumstances praise it too much. Just don’t mention it at all - unless you want to be called a bawbag. The only thing that’s possibly worse is calling a proud Glaswegian English. Apart from that, the only thing that can still get you stabbed in Glasgow is worrying about getting stabbed – and telling everyone about it.

It’s better to be safe than sorry: don’t wear football colours when Celtics and Rangers are playing. As welcoming and humorous as Glaswegians are, hooligans are not your friends. Also, don’t discuss Scottish football with locals unless you’re an expert.

Need a break from the city? Jump on a train to Balloch (only a 40min ride) and explore Loch Lomond, the gateway to the highlands. If you feel like hiking, take a bus from Balloch bus station to Balmaha and climb up Conic Hill. The views are breath-taking. 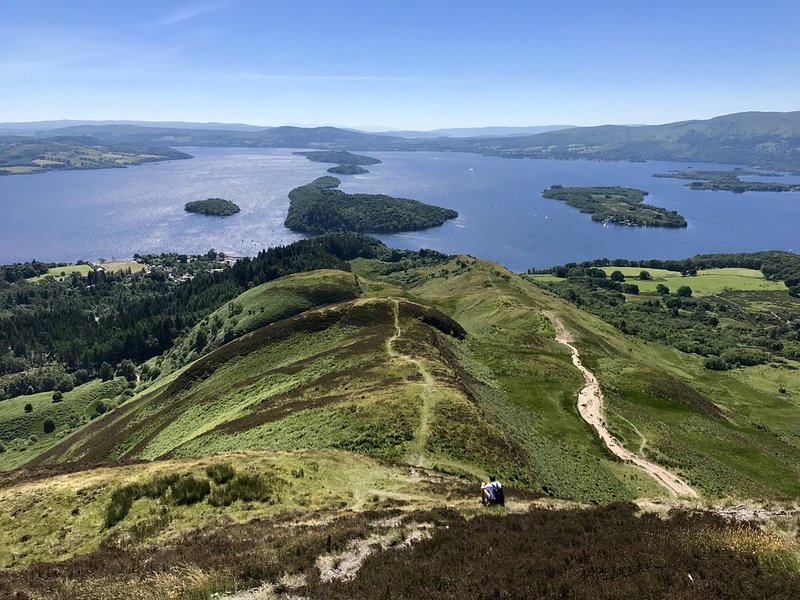 The bonnie, bonnie banks of Loch Lomond... as seen from Conic Hill.