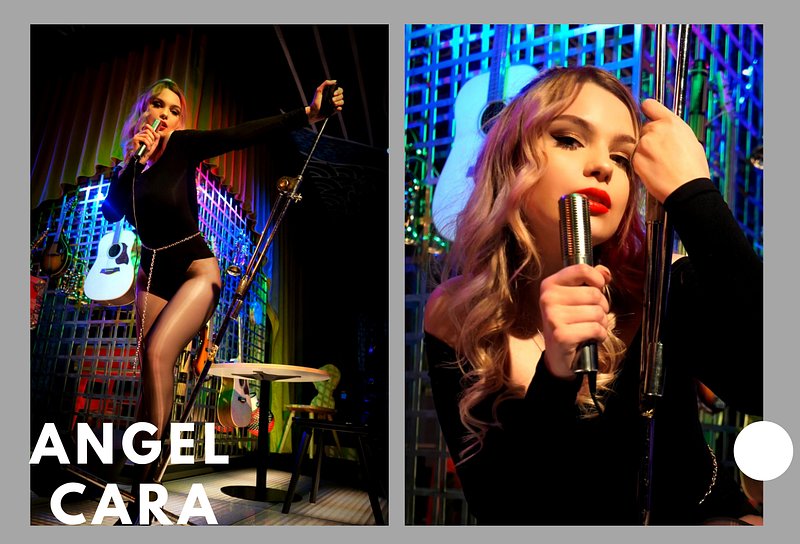 A sunny Saturday afternoon. One week after Cara Anna Wagner - you might know her as Angel Cara - has made waves with her debut single in the Luxembourgish music scene, we met the newcomer in what has been like a second home for her over the past couple of months: the Unison Studios in Differdange.

The song: a melancholic, deeply emotional yet beat-driven alternative pop gem where the 21-year-old gives us a glimpse inside her personal life. And, since she’s not one to rest on her laurels, the Luxembourgish singer-songwriter with Italian roots is already back in the studio to work on upcoming drops. We sat down with the young creative to talk about all things music, modelling, social media and future plans.

Before making music, you were pretty active in the modelling industry in and around Luxembourg. How did that transition come about?

I started modelling at the young age of 14. While I did enjoy it, modelling was never a real passion of mine, contrary to music. I started off with Solfège and played cello and piano at the Conservatory of Luxembourg since I was 6 years old. I even played in the orchestra and everything. Even when I quit - I must’ve been about 15 - I continued to do Drama and Musical, take French and German diction classes and do Cabaret in school. Being on stage has always been a big part of my life, so when I met my manager, Navid, the conversation about doing music came up pretty much instantly and about a month later, we already recorded my first-ever song, ‘Blood’. It was more of an experiment than anything else. We wanted to see how I feel about it, and apparently, I took a liking to it (laughs).

‘Angel Cara’ - what’s the story behind your pseudonym?

I always write about personal experiences and vulnerable topics, which, especially in the beginning, wasn’t exactly an easy thing to do. I could’ve just released music under my proper name, but using a pseudonym allowed me to keep a certain distance between the lyrics and myself. I have the impression as if I’m talking about someone else’s experiences, a third-person persona if you like, which makes it easier to work through certain experiences and also healthily cope with them. It’s the same Cara but different if you get what I mean. “Angel” was more of a creative choice. I wanted to underline this contrast between my voice which is pretty warm and my songs where the storyline is anything but nice.

How would you describe your music in three words?

Vulnerable, melancholic and straight-forward. I try not to mince my words when I share my experiences because I think it’s so important to show raw emotions and also be honest with myself when describing them. Every song is talking about one specific experience which has also allowed me to show a different side to myself. Most people just know me from Instagram, but that’s just what’s on the surface level. Now, I have the chance to show what’s beneath it.

Talking of Instagram, any thoughts on social media in general?

I think Gen-Z was born with a phone in their hand and a social media account up and running, which definitely has its pros and cons. Personally, I started using Instagram when I was about 14 years old and have been using it to give glimpses into what I’m doing and what I’m into. I try not to portray myself as someone I’m not, but even so, Instagram is always pretty superficial and I think it’s good to remind yourself of that from time to time.

What was your inspiration behind ‘Forgiveness’?

‘Forgiveness’ is about a situation that was very backstabbing and the lyrics allude to it from the first line onwards. I knew I had to leave everything that has happened behind me and gain distance from it to move on and heal. Writing the song has helped me a lot to forgive and eventually, draw a line under it.

Why did you choose ‘Forgiveness’ as your first song?

I feel like it gives a good introduction to who I am and shows the general direction of where I want to go with my music. The songs that I want to release this year are all on a certain spectrum and ‘Forgiveness’ was just a good middle-ground between them.

Tell us about the music video.

I’m a huge fan of Stanley Kubrick’s movie ‘The Shining’ which plays in a deserted hotel, so we shot the music video in the new Mama Shelter Hotel in Kirchberg. It was important to us to visualise my emotional state of mind in the situation - the fact of being all alone, performing just for myself, the red lights that show the inner conflict. It’s all alluding to how lonely I felt in this situation, but how eventually, I worked through it and was able to gain strength from it.

There’ll be a couple of singles coming your way very soon which will introduce me more as an artist and tease the different directions I want to take. And if everything turns out the way I like it to, there might even be a little EP dropping end of this year.