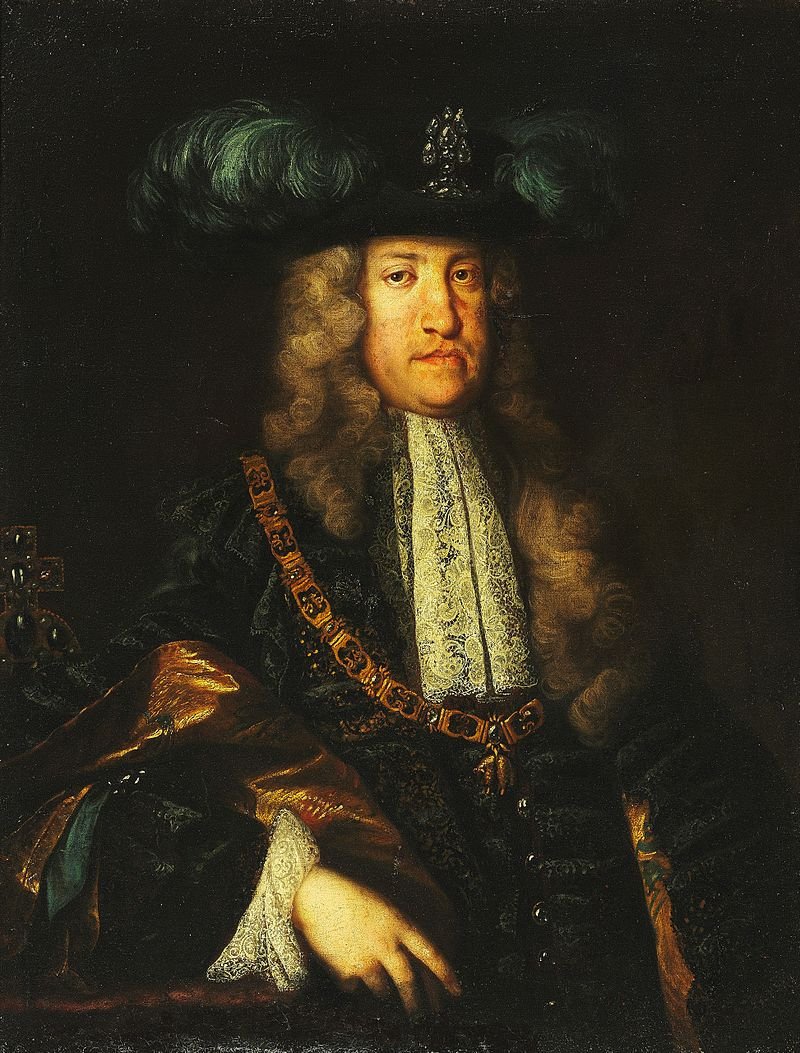 RTL Today contributor Thomas Tutton investigates the story of the Austrian Habsburgs, who ruled Luxembourg from 1714-1795.

As we’ve previously covered, two centuries of rule by the increasingly inbred Spanish Habsburgs had left Luxembourg devastated by a series of bloody wars, culminating in the French occupation from 1684-1697.

Europe remained at war for most of the 18th century, but Luxembourg would arguably enjoy a Golden Age under the far more competent rule of five Austrian Habsburgs.

So let’s take a look at the Austrian Dukes and Duchesses of Luxembourg.

The Austrian Habsburgs Take Over

The death of the last Spanish Habsburg, Charles II, in 1700 left a power vacuum in Spain which could only be resolved by a great European war – the War of the Spanish Succession.

Louis XIV of France claimed the Spanish throne for his grandson Philip of Anjou, the self-titled Philip V of Spain, while the Austrian Habsburg and Holy Roman Emperor Leopold I wanted to install his younger son, Archduke Charles.

The fortress of Luxembourg was immediately occupied by French forces in 1701 and held for most of the conflict, under the nominal sovereignty of Philip V.

Meanwhile the countryside was once again devastated by marauding foreign troops, this time the British under the famous Duke of Marlborough. 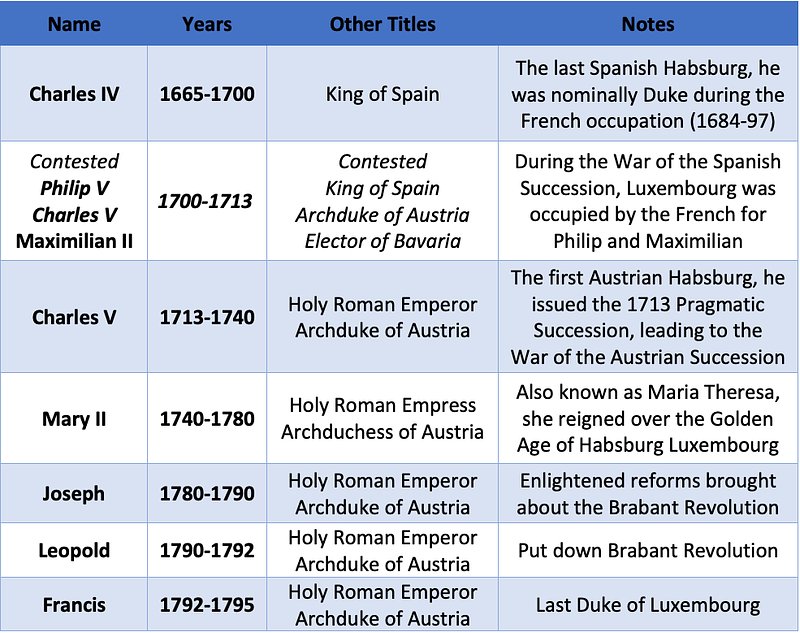 The Spanish Netherlands were governed throughout this period by Maximilian Emanuel, Prince-Elector of Bavaria, who was initially appointed by the Habsburgs in 1692 and fought against the French, but switched sides in 1701 to support Louis.

For his support of the French, Maximilian was briefly made Duke of Luxembourg, but at the final Treaties of Utrecht in 1713-4, which reshaped the map of Europe at the end of the war, the Spanish Netherlands were granted to the Austrian Habsburgs.

Philip V kept Spain, but the sovereign of the new Austrian Netherlands and Duke of Luxembourg was Charles VI, Holy Roman Emperor since 1711.

Charles' rule would bring a measure of peace to Luxembourg for the first time since the early 1600s.

The fortress was reinforced further, and the conflicts that did take place during his reign, such as the War of the Quadruple Alliance or the War of the Polish Succession, happily did not involve Luxembourg.

Sixteen or Nothing: Daddy Issues

The big problem for the Habsburgs in the 18th century – apart from the inbreeding which killed off the Spanish branch – was their consistent failure to produce male heirs, which caused all kinds of chaos.

Leopold I, Holy Roman Emperor from 1658-1705, had had 16 children by three different wives, but only two male sons survived until adulthood.

The first, Joseph I, was Holy Roman Emperor from 1705-1711. He had three daughters and one son, but the son died in infancy.

Joseph then contracted syphilis from a mistress and gave it to his wife, resulting in them both becoming sterile, before catching smallpox and dying in 1711.

He was thus succeeded by his brother, the new Holy Roman Emperor Charles VI.

Their father Leopold I had made Charles VI promise that if both he and Joseph should have no male heirs, the Habsburg crown would pass to Joseph’s daughters first, not Charles’s. 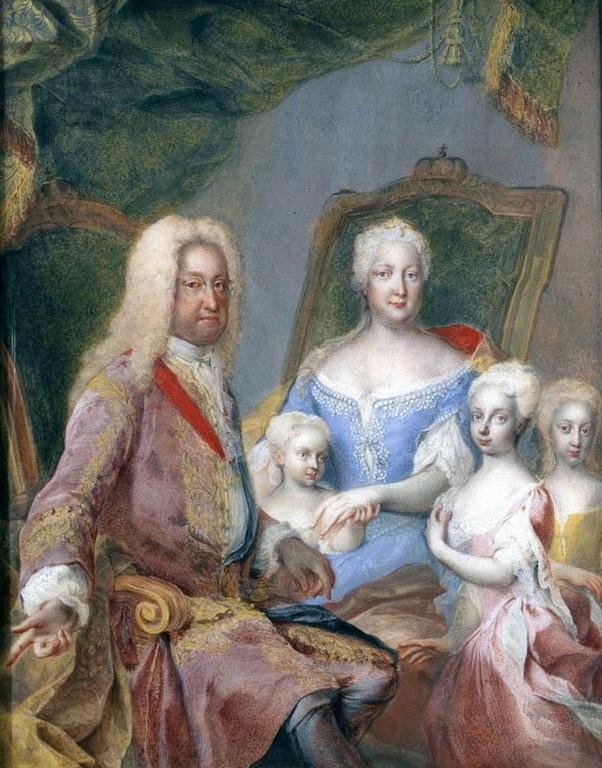 With Leopold and Joseph dead, however, Charles went back on his word.

In 1713 he issued a Pragmatic Sanction, which declared that if he should have no sons, the crown and the Holy Roman Empire would pass to his daughter, not his niece.

And, sure enough, it appears that he jinxed himself, for he would indeed have no male heir.

Charles VI’s eldest surviving child was his daughter Maria Theresa, who inherited the Duchy of Luxembourg as well as the rest of the Habsburg crown lands in 1740.

Maria Theresa is remembered fondly in Luxembourgish history as a competent ruler who sought to modernise some of the Duchy’s provincial institutions, but the start of her reign was marked by a titanic European struggle between her allies and enemies, who contested a woman’s right to become Holy Roman Empress.

At Charles VI’s death, the War of the Austrian Succession broke out, pitting Austria, Great Britain and Russia against Prussia, France and Spain, along with each side’s German and Italian allies.

In the middle of this was a civil war between the daughters of Joseph and Charles: Joseph’s daughter Maria Amalia and her husband Charles Albert of Bavaria claimed the right to succeed Charles VI against her cousin Maria Theresa.

During the war, Charles Albert was crowned Holy Roman Emperor, becoming the first non-Habsburg holder of the title since Sigismund of Luxembourg in 1437. 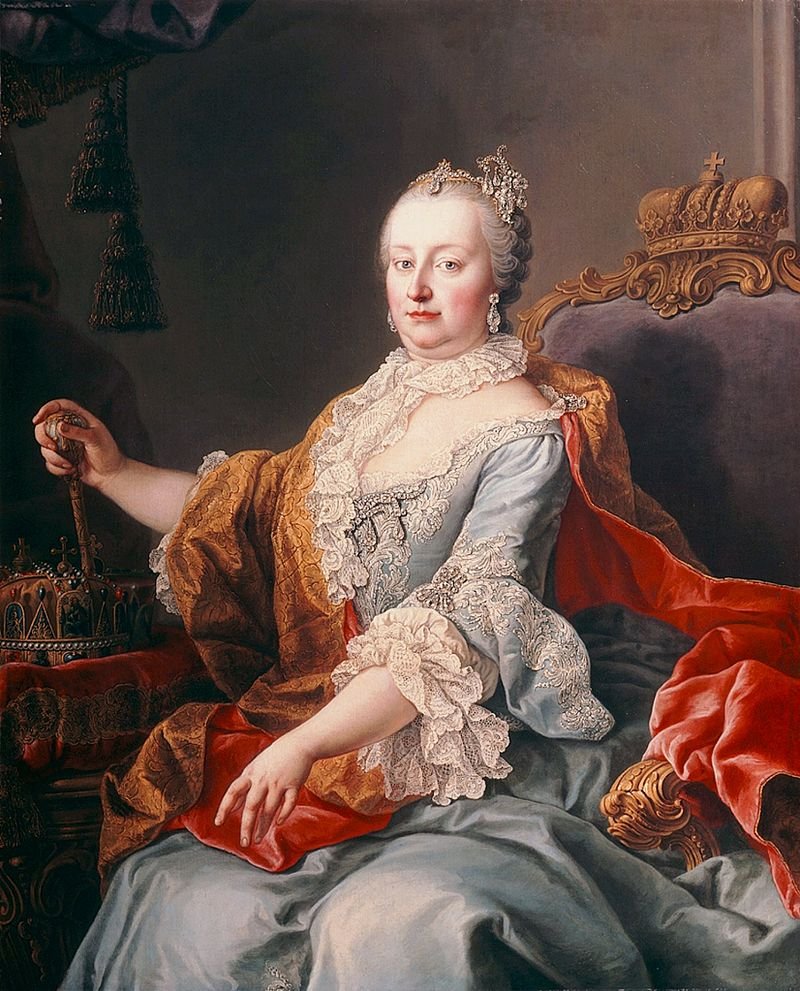 In the end, a compromise was reached when Maria Theresa’s husband Francis was elected Holy Roman Emperor in conjunction with her in 1745, and the wars fizzled out by 1748 without many further territorial changes.

Fortunately for Luxembourg, the Duchy had not been one of the principal battlegrounds of this war – in part due to French recognition of the difficulty of taking the fortress they had done so much to build up.

Even better, with the Diplomatic Revolution of 1756 France and Austria became allies for the first time, and the Seven Years’ War of 1756-1763 was thus fought far away from Luxembourg’s borders.

Incidentally, one consequence of the Franco-Habsburg alliance was that a young Austrian princess was sent to Paris to marry the heir to the French throne.

That princess was none other than Marie Antoinette, the daughter of Maria Theresa.

The Last Dukes of Luxembourg

Maria Theresa ruled as Duchess of Luxembourg and Holy Roman Empress with her husband until his death in 1765; she then reigned alone until she passed away in 1780.

She was succeeded by her son Joseph, who would turn out to be one of the strongest supporters of the concept of enlightened absolutism.

He wanted to reform the ancient institutions of his various domains in order to make his administration more efficient and effective.

Joseph also had some liberal views: for instance, he sought to ban the use of torture, and in 1781 passed an edict granting religious freedom to Protestants.

These liberal views were met with huge opposition in the conservative Austrian Netherlands, and in 1789 the Brabant Revolution broke out against his rule.

Joseph promptly died, to be succeeded by his brother Leopold in 1790.

Leopold tried to restore order in the Austrian Netherlands from his troops’ base in Luxembourg, but he was preoccupied with the storms of the French Revolution and then popped his clogs in 1792. 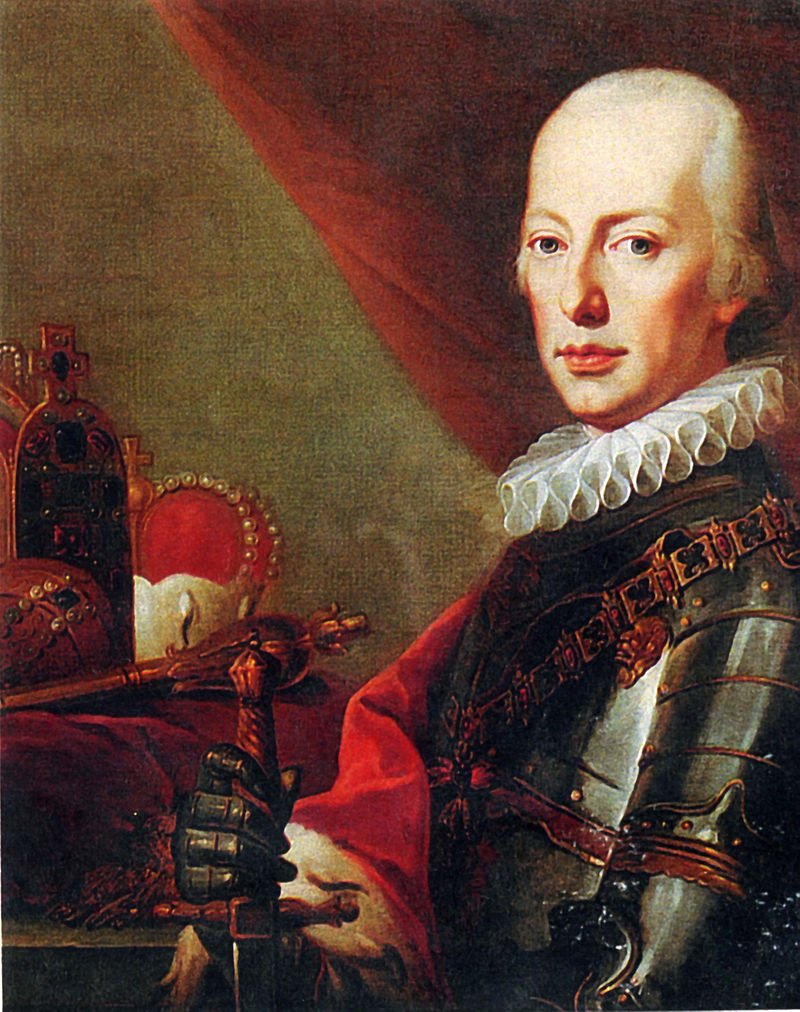 The last Duke of Luxembourg was Francis, son of Leopold.

He would rule during the transformative period of the French Revolution, overseeing the end of the Holy Roman Empire and the Napoleonic Wars.

And he also oversaw the end of the Duchy of Luxembourg, which finally expired after 441 years when it was invaded by French troops in 1795 and incorporated into the French Republic.

They may have been the last Habsburg rulers, but the five Austrian Habsburg Dukes and Duchesses of Luxembourg, whatever their faults, must be seen as a definite improvement on their Spanish cousins.