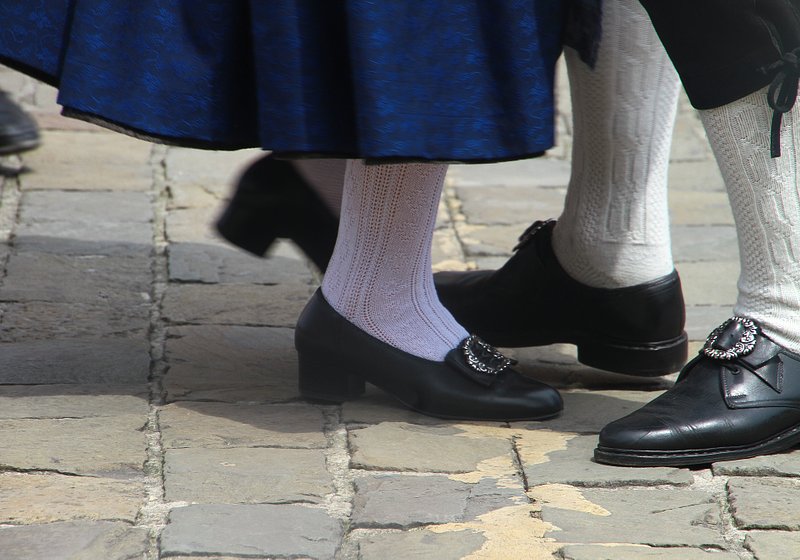 While only rarely practiced today, Luxembourg does actually have a repertoire of folk dances with specific choreographies that were performed by people living on its territory in the past.

It should be noted straight away that there are two major problems when it comes to writing about Luxembourgish folk dancing. Firstly, apart from a number of small local initiatives, there is no "living" folk dancing tradition in Luxembourg. In fact, and as shall be discussed shortly, even these local associations were the result of a "revival movement" that sought to bring back "lost" Luxembourgish traditions in the aftermath of World War II.

The second problem is that it is quite difficult to find reliable sources available to the public that could serve as a basis for an article such as this one. In contrast to other European countries, interest in researching these folkloristic traditions emerged quite late in the Grand Duchy.

However, there is one text entitled "Luxembourgish Folk Dances" (Danses Folkloriques Luxembourgeoises), which allows us to get at least an idea of this rarely talked about aspect of Luxembourgish culture. The text in question is a memoir written by the late Paule Moris, who was a PE teacher and folk-dance enthusiast herself. She wrote it in the context of her pedagogic traineeship to become a teacher in 1988 and it was published years later in a book called "Ronderëm de Lëtzebuerger Volleksdanz" (Folk Dancing in Luxembourg), which the author of this text was lucky enough to have stumbled upon while browsing an antique shop.

The large majority of what follows will thus be based on Moris' memoir and other information provided in the aforementioned book, which was published by the folklore group Uucht-LaVeillée.

I. A brief history of folk dancing in Luxembourg

A number of historical documents and records convey an idea of when and how people living in the area we have come to know as Luxembourg today liked to dance. Skimming through them, it stands out that Luxembourg's dancing tradition seems to be somewhat intertwined with its other, hugely influential, tradition of funfairs.

One particular type of dance, which also shows ties to feudal times, was that of the danse seigneuriale (a seigneur was a French title of nobility held by the owner of a fief). In the days of feudalism, the young people of a village had to ask their seigneur for the right to dance at their local fair. The seigneur would then open the ball by dancing with whom he deemed to be "the most beautiful girl in the village". If, for any reason, the seigneur could not attend a ball in person, this privilege was "auctioned off".

Some documents cite names of specific dances, such as the Schweitzerimann or the Siebensprung. However, they usually lack detailed description of the dances.

A book which was highly influential in reviving the interest in Luxembourg's tradition of folk dances was G. Spedener's "The marriages of farmers in the olden days" from 1933. Spedener not only named and described a variety of traditional marriage dances, but also attributed specific 18th century composers to the songs that went with them, something which would prove to be an enormous help to members of the "revivalist" movement some years later.

After World War II, a renewed interest in folk traditions swept across numerous European countries. In Luxembourg, youth hostels played an important role as a sort of hub, where people who shared a common interest in reviving "lost" Luxembourgish traditions met, an ambition which may have been fuelled by the trauma of German occupation and the Nazis' attempt to suppress the Luxembourgish identity and culture.

Over the years, a number of local folk dance associations formed, with the most well-known being Uucht-La Veillée, Vallée des Sept Châteaux, and La Ronde.

In the conclusion of her memoir, Moris proposed three distinct categories for a total of 14 folk dances:

In Moris' categorisation, traditional dances are dances "the melodies and choreographies of which have been handed down right up until today", and which are thus considered to be "the most authentically Luxembourgish" dances.

This category includes dances for which members of the revivalist movement have recreated choreographies as well as dances from border regions which have been integrated into the Luxembourgish tradition.

This category includes dances which have been discovered by Moris during her own research and which at the time (1988) were not yet performed by Luxembourgish folk groups.

It should be pointed out that Moris deliberately excluded a number of dances from her list which were nevertheless performed by local folkloristic groups at the time (and maybe still are to this day). The reasons for this are that the dances were either judged to be "foreign" to the Luxembourgish culture, i.e. dances that have a particular connection to a region or village that is too far away from Luxembourg to have influenced local culture, or that they are only known by name but have otherwise completely disappeared.

The three dances that will be analysed in a bit more detail below are the Siwesprong, the Chiberli, and the Karschnatz.

Both the Siwesprong and the Chiberli are so called circle or chain dances, which are probably one of the oldest known dance formations. The Karschnatz is a country dance, a type of dance which includes a predefined sequence of figures.

This is a dance with a very long tradition, in fact, some sources suggest it may be among the oldest dances that have been continually handed down over the centuries. It is part of the folklore of practically all of Europe's German-speaking territories and was mentioned by name by numerous Luxembourgish authors.

According to Moris, it seems that the dance was originally tied to a "ritual", more specifically an agricultural ritual. It appears to have originally been performed by men during the spring and may have been a means to encourage fertility.

The dance later evolved into a couples' dance and it is in this form that it is performed to this day in Luxembourg as well. The original message of fertility seems to have taken on a more carnal meaning, as the dance's signature jumps – usually performed by the men – are meant to impress and seduce their female dance partners.

Over the course of the dance's seven jumps, the men gradually get closer to the ground until they completely lie down on their stomachs following the last jump. The women then pull on the men's clothes to help them up.

As with any dance, the "standard" routine may always be slightly adapted or changed when it is performed live.

Chiberli is an alternative name for Soyotte, a dance which is widespread in the French regions of Lorraine and Champagne. The dance can also be found in Germany, where it is part of the Wechselhüpftänze, which were particularly popular in the Rhine and Saar regions as well as the Eifel.

There are two different theories regarding its origin. In France, it is thought that the dance may have something to do with the wood trade, as soyotte is a word in the local vosges dialect and means saw. According to this theory, the back-and-forth of the dance's first figure would thus imitate a sawing motion.

In Germany, it is believed that the Wechselhüpftänze were at the origin of a number of folkloristic dances which were reserved for women and performed as a sort of fertility ritual.

In the past, this dance was usually performed by young people due to its physically demanding nature.

As part of Moris' "folklorised" dances, the Karschnatz is a dance that was found to be part of local tradition in the German town of Prüm. As the town is located in a region that was once part of the Duchy of Luxembourg, it can be assumed that this dance was part of the shared cultural heritage of the region.

The Karschnatz is special because it is a rare example of a Luxembourgish folk dance that imitates a specific action, namely the actions of farmers leading up to the harvest.

The dance appears to have been part of a sort of "Thanksgiving" celebration at the end of the annual harvest period. Its fast rhythm and lively character hints at the fact that this was a dance performed at a joyous occasion.

Theoretically, an unlimited number of couples can participate in this dance, but in practice a specific number is usually agreed upon beforehand. The first couple goes through the figures once and then the second couple does the same. This is repeated until every couple participating in the dance has performed it in its entirety. Again, depending on a dance group's customs and preferences, variations of this routine can be found.

It is remarkable how learning about the topic Luxembourgish folk dance actually reveals a number of blatant misconceptions that a lot of us carry with us when it comes to culture and national identity.

The term Luxembourgish folk dance might lead one to think initially that there are a number of dances that were invented in Luxembourg and exclusively performed inside of its borders. In reality, and as this article has hopefully conveyed to some extent, the history and present of these dances is much less black-and-white than some may believe.

It is not wrong to say that there are Luxembourgish folk dances, in the sense that there are a number of dances that were performed in a constantly changing area known by different names throughout history by an ever-changing demographic of people with vastly different identities.

When discussing topics like this one, it must never be forgotten that national identity in the sense that we know it today is a fairly recent invention. Borders have never been set in stone and were sometimes drawn completely arbitrarily.

These dances should thus not be seen as a means to separate what is Luxembourgish from what is not, but instead as proof of the shared cultural heritage, the multiculturalism, and the many, many influences that have always been at the core of Luxembourg's history.

On 29 October 2020, the Ministry of Culture also officially added the Luxembourgish folk dances to its inventory of the Grand Duchy's intangible cultural heritage.