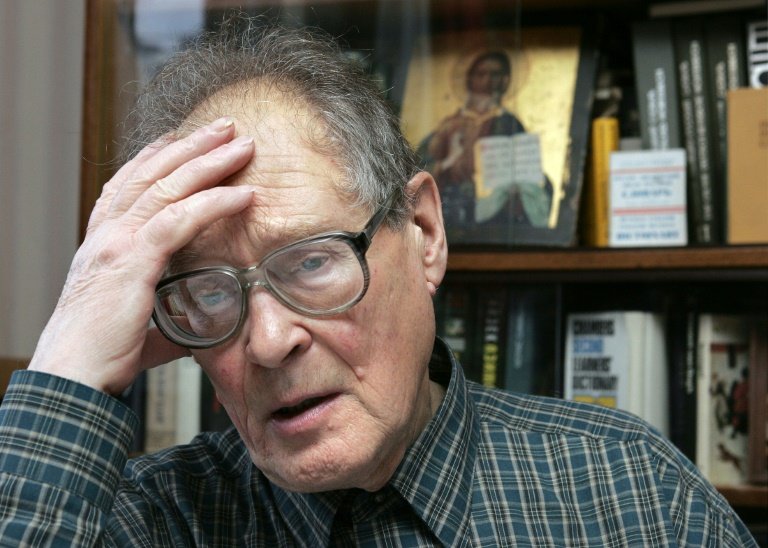 Sergei Kovalev, who died aged 91 on Monday, was a biologist who became one of the leading members of the USSR's pro-democracy movement / © AFP/File

Kovalev was a biologist who became one of the leading members of the USSR's pro-democracy movement. He was held for years in Soviet labour camps for his activism.

After the collapse of the Soviet Union, he became a fierce critic of Moscow's war in Chechnya and warned against democratic backsliding when President Vladimir Putin came to power in 2000.

His son Ivan Kovalev said on Facebook that his father died "in his sleep" in the early hours of Monday morning.

Russian rights group Memorial, which Kovalev co-founded, said he was "faithful to the idea of human rights always and in everything -- in war and peace, in politics and every day life".

The leading rights organisation -- which has been labelled a "foreign agent" by Russian authorities under a controversial law -- said Kovalev had campaigned for human rights since the 1960s.

- Years in Gulag and exile -

As a biology student, Kovalev had dreamed of devoting himself exclusively to science.

But he changed his mind after the arrests of dissident writers Yuli Daniel and Andrei Sinyavsky.

"I then understood that it was not possible to only be in science," he said. "It would have been shameful."

In 1968, Kovalev was fired from his job at a Moscow university laboratory for joining the Action Group for the Defence of Human Rights in the USSR -- considered to be the Soviet Union's first rights group.

He then grew close to the dissident academic Andrei Sakharov.

Kovalev was part of a group of dissidents writing the "Chronicle of Current Events", an underground typed bulletin that reported on human rights violations in the USSR.

It reported the arrests and psychiatric internments of the Soviet regime's opponents and on the situation in its labour camps.

He was arrested in 1974, accused of spreading "anti-Soviet propaganda" and sentenced to seven years in a Gulag camp, followed by three years of house arrest in the icy Siberian region of Kolyma.

He was only allowed to return to Moscow in 1987, thanks to the perestroika reforms launched by Soviet leader Mikhail Gorbachev.

He went on to help found Memorial, which recorded testimonies of Soviet political repression.

Kovalev was one of the few Soviet dissidents that entered post-USSR politics.

He contributed to writing Russia's new constitution and was elected a parliamentary deputy twice.

In 1994, he was appointed as chairman of President Boris Yeltsin's human rights commission in 1994.

But he was forced to give up the post two years later for his outspoken criticism of Russia's brutal intervention in the Chechen conflict.

Kovalev also criticised the political system created by Putin, from the beginning of the former KGB spy's long rule.

"A controlled democracy is being created in our country that seeks to create problems for 'enemies inside as well as outside'," he said in 2001, a year after Putin was inaugurated as president.

In 2014, he called on Western countries to "stop Russian expansion" into Ukraine after Moscow annexed Kiev's Crimea peninsula.

According to Kovalev, the West had made "too many concessions" to Russia.

He also criticised Russian opposition leaders, whom he accused of being pragmatists without strong moral convictions.

"I belong to the camp of idealists in politics," he said.