A car ploughed through a crowd of people in Trier at around 2 pm on Tuesday 1 December, leaving at least five dead and 18 injured, including a person from Luxembourg. Six are in critical condition. Among the dead is 9-week-old baby. A vigil was held on Wednesday morning at the Porta Nigra.

According to reports coming out of Trier, police have confirmed, that after the rampage in Trier, the perpetrator parked the car and calmly smoked a cigarette.

It is being reported that he was smiling.

Initial reports had suggested that the 51-year-old local man had been forced off the road, but it is now confirmed that he stopped the car himself at the side of the road.

At a special meeting of the interior committee of the Rhienland-Pfalz state parliament in Mainz, Trier Police Vice President Franz-Dieter Ankner reported that police officers found the 51-year-old standing at the rear of the car.

"There he looked at the emergency services with a grin." The officers then overpowered him and arrested him.

The Trierischer Volksfreund also report that officers found ammunition rounds in the SUV but no weapon.

A search is underway for a possible firearm having being dumped before, during or after the rampage took place.

At 1.46pm on Thursday afternoon there was a moment of silence observed to remember those who died and to offer support to those who remain injured following Tuesday's tragic events.

Police request that any person come forward, no matter how small the information may be and can do so by contacting them via emai on:
(trierstehtzusammen@trier.de), social media or phone.

Hundreds of videos and photos have already been sent in.

The Trier University have set up a psychological support group for those that need to reach out.

Over 214,00 euros in donations have so far been collected. If you wish to donate, you can do so to these details:

The Rheinland-Pfalz interior ministry have confirmed that they are stepping up police presence in the state's city centres this weekend.

Trier's Porta Nigra was bathed in violet on Wednesday evening after a vigil was held at 10am. The ceremony was attended by hundreds of the city's residents as the population reeled from the terrible act that has rocked the nation.

Messages of support have been flooding in across the international community, with filters, stamps and messages added to social media profiles.

“Five people had their lives torn from them yesterday in the Trier pedestrian zone. Others are fighting for survival in the hospital, with many more seriously injured. Because a man who was born and raised in the area turned his car into a murder weapon, killing at random. Whatever made him do it - nothing, really nothing, can justify this brutal and terrible act,” these are the words of Malu Dreyer, as the Minister-President for Rheinland-Pfalz spoke at the vigil on Wednesday.

Speaking of the strength and dedication of the emergency service personnel, Dreyer said; “I would like to thank everyone from the bottom of my heart who yesterday made sure that the perpetrator was stopped, the dead recovered and the injured cared for. You have all done a great service: for the people affected and for our country. And you have shown through your actions that humanity is stronger than violence. These days are days of mourning for the whole of Rhineland-Palatinate. As a sign of this, the flags across the country are now set at half mast.”.

Trier's Mayor Wolfram Leibe echoed these sentiments, calling on the Trier people to quietly commemorate at 1.46 p.m. “Let's stop and remember the victims. Let us show how strong and solidarity the people of this city are. Trier stands together."

1.46pm is the time the 51-year-old driver began his horrific rampage through the streets of the city centre.

A dark-grey SUV drove down the Brotstraße in the city centre of Trier, police and local media stated.

Four people were confirmed dead at 4pm, with at least 30 injured. This number was revised to 5 at shortly after 8pm, when it was first announced in local media that a young child had been added to the list of victims.

In later updates police confirmed a 52-year-old woman had later been pronounced dead.

We have been made aware on Wednesday morning that a Luxembourg citizen was among the wounded. He is currently being treated at the hospital in Trier, for injuries that are considered minor.

Correction: The police have corrected information about the child killed via a press release. According to this, the baby killed was not nine months old, but nine and a half weeks. In addition to the child, the 45-year-old father also died. The wife and mother of the girl and another one and a half year old son of the family were injured and brought to a Trier hospital, according to the police.

The mayor of Trier Wolfram Leibe, tearfully declared, in an earlier press conference, that one of the victims was a 9-week-old baby.

A 51-year-old German man, now named as Bernd Walter W from Kordel, has been arrested after police managed to ram his car and bring him to a standstill.

As of yet officials are unable to confirm the motivation behind the attack, and the man has been taken in for questioning and it has been reported in German media that he is assisting with the inquiry.

READ: How did the car rampage happen?

Police spokesman Karl-Peter Jochem told reporters that "the danger is over". The area remained in lockdown, with helicopters circling above and several hundred police units on the ground. Locals were asked to avoid the pedestrian area of Germany's oldest city. The SEK (police tactical unit) from Wittlich were scrambled to the scene, with local police securing evidence and collecting witness accounts.

An eye witness reported that he saw people being hurled through the air, as well as a children's pram. Another witness said that one man died on the corner of Sternstraße, along with a woman in front of the C&A on Konstantinstraße.

A source close to RTL confirmed that a local school in the neighbourhood was on lockdown shortly after the attack, following protocols in the scenario of a possible terrorist attack. Parents of children at the Ausonius-Grundschule were called to pick up their children, as they would not be allowed to go home alone.

An extensive press conference took place at 7 pm and the key points delivered are found below. Police have asked witnesses not to spread videos or pictures on the internet, and to upload them through this portal instead.

The inner city area usually hosts the annual Christmas market, cancelled this year due to Covid-19. Chancellor Angela Merkel's spokesman Steffen Seibert on Twitter called the incident "shocking". He said the country's thoughts were with the "relatives of the deceased, the many injured and with all those who are helping to care for those affected".

Germany: At least 2 dead, 10 injured after car crashes into pedestrians in #Trier pic.twitter.com/9tdhB6OkRo

Luxembourg City is planning to close off pedestrian zones with concrete blocks, the CGDIS has said.

Four ambulances, one first responder, two helicopters, one liaison officer and one medical emergency doctor have headed to the Trier to offer their support.

Luxembourg's PM Xavier Bettel has offered his thoughts and sympathies with those affected:

"I am deeply appalled and dismayed by the terrible news from Trier. My thoughts are with the victims and the numerous injured and their families. In this difficult moment, Luxembourg stands firmly by the side of our neighbours and friends."

the Grand Duchess and I were deeply shocked when we heard of the appalling incident that occurred in Trier this afternoon.

Our thoughts and sympathies are with the victims and their families. In the name of the Grand Duchy of Luxembourg, we want to express our sincerest condolences to you and your fellow citizens.

Germany can be assured to have our full solidarity and support in these trying times."

Luxembourg City Mayor Lydie Polfer also issued a letter of condolence to the citizens of Trier, promising that the capital will stand in solidarity with its neighbours and offer any support it can give.

At 7pm on Tuesday, city officials held a press conference at the Trier town hall to inform the public about the most recent findings in the ongoing investigation.

Mayor Wolfram Leibe was the first to utter words of condolences to the victims: “This is the darkest day Trier has experienced since World War II.” The mayor was at a loss to explain or understand the horrific deed, which cost 5 people their lives: a 25-year-old woman, a 52-year-old woman, a 45-year-old man, a 9-week-old baby, and a 73-year-old woman, all from Trier. Mayor Leibe further conveyed that around 700 emergency service members were deployed throughout the city and that the culprit could be apprehended within a couple of minutes. He finally announced that a commemorative service will be held in front of the Porta Nigra tomorrow morning at 10am.

Trier vigil at the Porta Nigra
© Domingos Oliveira, Ryck Thill
The photos published on this site are subject to copyright and may not be copied, modified, or sold without the prior permission of the owner of the site in question.

Rhineland-Palatinate State Minister Roger Lewentz provided further information on the number of injuries, as well as the man taken into custody, who is of German descent. Vice-president of the Trier police department Franz-Dieter Ankner complemented his take, informing the press that the driver must have spent the past few days living in the car used in the attack. The vehicle did not belong to him however, but was borrowed from an acquaintance. The 51-year-old tried resisting the arrest.

Senior public prosecutor Peter Fritzen then took over and elaborated on the ongoing investigation. He explained that the driver did not have any priors and that the motive behind the attack remained unclear at this stage. Fritzen confirmed that no terrorist connections could be identified and that the deed was probably related to psychological issues. He further noted that the driver was under the influence of alcohol at the time of the attack, displaying a blood alcohol concentration of 1.4 Promille.

Head of the fire brigade Andreas Kirchartz was the last to speak and provided insight on the operations conducted by local and foreign emergency services. He also noted that there were four critically injured, five severely injured, and six with minor injuries, in addition to which Lewentz noted that two dozen or so are in shock. Mayor Leibe then concluded the press conference by thanking Luxembourg and France for the immediate help that was offered, as well as the sentiments of solidarity following the tragic events. 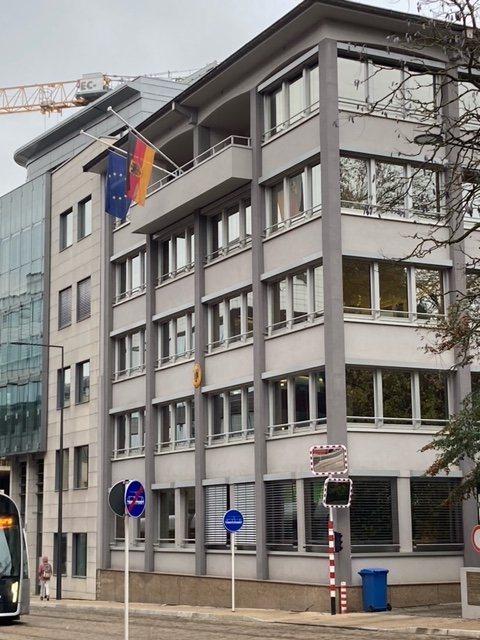