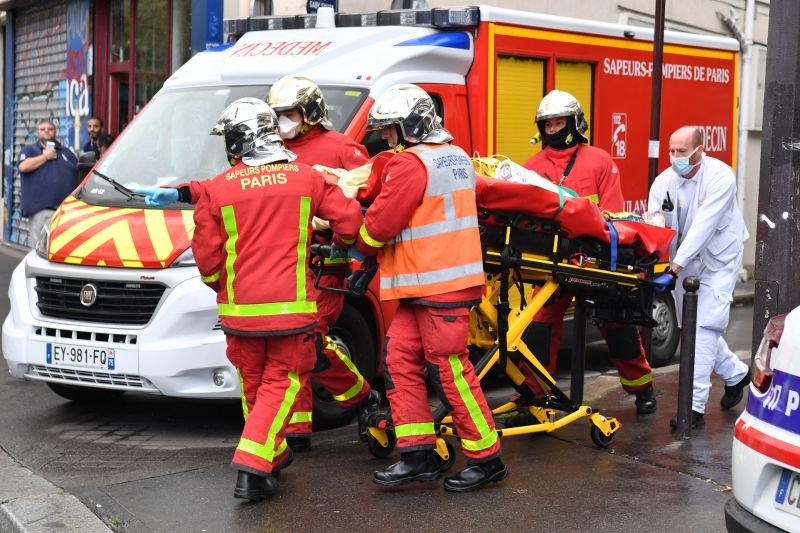 Four people were injured, two seriously, in a knife attack in Paris Friday near the former offices of French satirical magazine Charlie Hebdo, a source close to the investigation told AFP.

A man armed with a knife seriously wounded two people on Friday in a suspected terror attack outside the former offices of French satirical weekly Charlie Hebdo in Paris, three weeks into the trial of men accused of being accomplices in the 2015 massacre of the newspaper's staff.

Charlie Hebdo had angered many Muslims around the world by publishing cartoons of the Prophet Mohammed, and in a defiant gesture ahead of the trial this month, it reprinted the caricatures on its front cover.

Twelve people, including some of France's most celebrated cartoonists, were killed in the January 7, 2015, attack by Islamist gunmen.

Paris police said two people were "critically wounded" in Friday's attack, which is being investigated by specialist anti-terror prosecutors. An earlier toll had said four were wounded, two seriously.

The suspect was detained after the attack close to the Place de la Bastille square, not far from the scene, and he faces possible charges of "attempted murder related to terrorism" and "conspiracy with terrorists," police and prosecutors said.

A second person has also been detained in the Bastille  area, a judicial source told AFP.

Initial reports had indicated there were two attackers but police later emphasised there appeared to have been just one.

A staff member for the Premieres Lignes news production agency said two colleagues were hurt in the attack.

"Two colleagues were smoking cigarettes in the street. I heard screams. I went to the window and saw a colleague, bloodied, being chased by a man with a machete," the employee said.

"We know that our two colleagues are injured, but we do not know more for the moment."

Five schools in the area immediately went into lockdown with no one allowed to leave or enter.

"A serious event has taken place in Paris," said Prime Minister Jean Castex, who was just about to address reporters during a visit to northern Paris, before calling off the event to go to the crisis centre of the interior ministry.

He added the attack had taken place "in front of" Charlie Hebdo's former offices in the 11th Arrondissement of central Paris. The magazine's current address is kept secret for security reasons.

"Around noon we went for a lunch break at the restaurant. As we arrived, the manager started shouting 'Go, go there is an attack ...' We ran to lock ourselves and stay inside our shop with four customers, " Hassani Erwan, a barber aged 23, told AFP.

The stabbing came as the trial is underway in the capital for alleged accomplices of the perpetrators of the January 2015 attack on Charlie Hebdo by brothers Said and Cherif Kouachi and claimed by a branch of Al Qaeda.

A female police officer was killed a day later, followed the next day by the killing of four men in a hostage-taking at a Jewish supermarket by gunman Amedy Coulibaly.

The 14 defendants stand accused of having aided and abetted the perpetrators of the 2015 attacks, who were themselves killed in the wake of the massacres.

The trial has reopened one of the most painful chapters in France's modern history, with harrowing testimony from survivors and relatives of those who died.

The magazine, defiant as ever, had marked the start of the trial by republishing controversial cartoons of the Prophet Mohammed that had angered Muslims around the world.

Al-Qaeda then threatened Charlie Hebdo with a repeat of the 2015 massacre of its staff.

More than 100 French news outlets on Wednesday called on people to support Charlie Hebdo, taking aim against the "enemies of freedom."

The trial in Paris had resumed Friday following a day's pause after a suspect's coronavirus test came back negative.

The hearing for the fourteen suspects, which opened on September 2, was postponed Thursday after Nezar Mickael Pastor Alwatik fell ill in the stand.

He was back in the box on Friday, after the presiding judge informed defence and prosecution lawyers by SMS late Thursday that the test results allowed for the trial to go ahead.