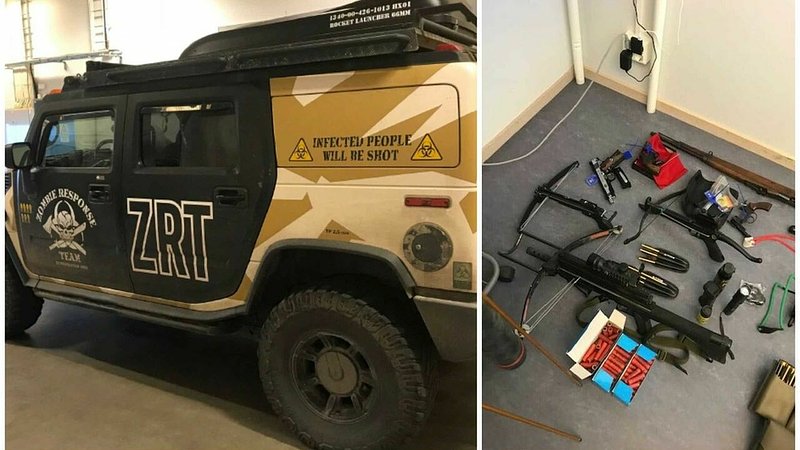 The couple belonged to a group called "Zombie Response Team" and were found to have 16 illegal weapons in their possession upon crossing the border.

This rather curious incident took place on 25 March but has only now been publicised in local media. Two images released by the Swedish customs agency show that the couple - a man and a woman - arrived into the country in a Hummer vehicle which bore a "Zombie Response Team" logo as well as the rather ominous warning that "infected people will be shot."

Also in their possession of illegal weapons. Reporting varies slightly as to exactly how many weapons were seized, from 16 to "over 20." What has been confirmed is that their arsenal included several crossbows, a taser or some other form of electric shock weapon, several firearms designed to fire teargas canisters (and several canisters thereof), a knuckle iron, and at least one truncheon.

The local prosecutor noted that they hadn't chosen the most inconspicuous of vehicles for smuggling weaponry, while the couple's defence attorney states that the couple had not known that the weapons could not be legally brought into the country. They were reportedly on their way to a summer house which they had recently purchased in the south-easterly Blekinge region of the country.

Some Swedish media have speculated that the couple are part of a role-playing association as a means of explaining the 'Zombie Response Team', but there has as yet been no confirmation as to whether this is the case.