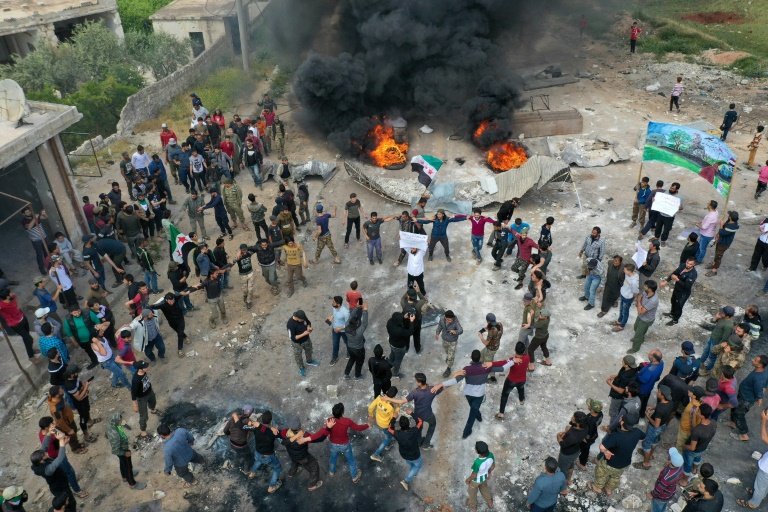 A drone images shows Syrian demonstrators gathering during a protest in the village of Maaret al-Naasan in Syria's Idlib province to protests against a reported attack by Hayat Tahrir al-Sham, an alliance led by a former Al-Qaeda affiliate / © AFP

Protests broke out across opposition-held parts of northwest Syria Friday against an al-Qaeda-linked jihadist group after it opened a trade crossing into regime territory, an AFP correspondent and a war monitor said.

"Mass protests broke out in several towns and villages in the provinces of Idlib and Aleppo to denounce the practises of the Hayat Tahrir al-Sham alliance" said the Syrian Observatory for Human Rights, a Britain-based monitor.

In particular, the demonstrators "voiced their refusal to open any crossing with regime forces in the area," it said. 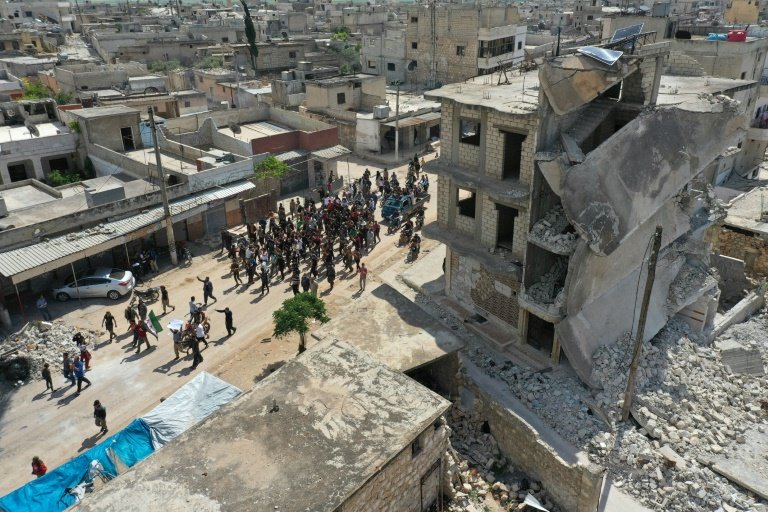 A drone images shows Syrian demonstrators gatheringin the village of Maaret al-Naasan in Syria's Idlib province on May 1, 2020, to protest against a reported attack by Hayat Tahrir al-Sham on a protest the previous day / © AFP

Despite being sworn opponents of the regime, the jihadist group on Thursday opened a crossing into government-held territory in Aleppo's western countryside, near Idlib's provincial borders, according to the Observatory.

An AFP correspondent said that HTS was hoping to charge fees on vehicles passing through, but the jihadist group on Friday said it would walk-back on its decision because of popular pressure.

"We have decided to suspend our decision to open a new crossing... for the public good of the liberated north," it said in a statement.

Earlier, hundreds had taken to the streets across opposition-held parts of Idlib and Aleppo, brandishing Syrian revolution flags and chanting anti-HTS slogans, the correspondent said.

"Death and not humilation," demonstrators chanted in unison.

Among them, Nizar Hamadi said that the opening of the crossing showed HTS has little concern for the fate of the region's population.

"How can they gamble with lives of millions," he told AFP. Syrian demonstrators gather on May 1, 2020, to protest against a reported attack by Hayat Tahrir al-Sham, an alliance led by a former Al-Qaeda affiliate, on a protest the previous day / © AFP

Syria's last major rebel bastion in the country's northwest is home to three million people, half of whom have been displaced from other parts of the country following successive regime offensives.

The latest government assault on the northwest has displaced nearly a million people since December, although fighting has slowed since a ceasefire took hold in March.

Many are now returning to their homes, but residents fear that the regime may renew its attacks at any moment.

"This is a criminal regime that killed us and killed our children," said Alaa, another protester.

"Why would we open a crossing with them?" he asked rhetorically.