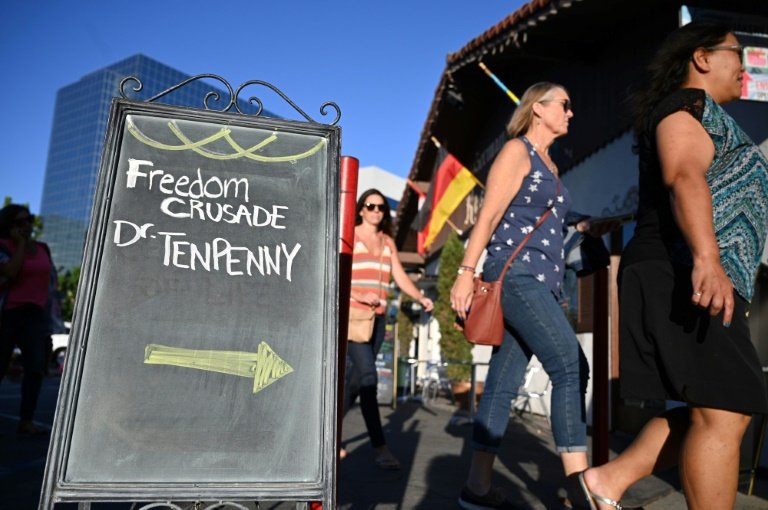 For Sherri Tenpenny, God is on the side of those who spurn Covid-19 vaccines. Making money, critics say, is the Ohio osteopath's higher calling.

From a $240 premium podcast annual membership to $165 webinars on why people "should not take the shot," health supplements and ticketed public speaking, Tenpenny runs a sprawling enterprise based on anti-vaccine activism, disdain for masks and testing, and denials that Covid-19 is real.

An AFP investigation has found that the 63-year-old widow developed a business around coronavirus skepticism at the same time as she owes US tax authorities at least half a million dollars.

Earlier this year, Tenpenny was named one of the worst known spreaders of falsehoods, myths and misleading statements about vaccines -- a group the non-profit Center for Countering Digital Hate dubbed the "Disinformation Dozen."

A separate study put her in the cadre of America's biggest anti-vaccine profiteers.

But in comments to AFP, Tenpenny stood by her claims, maintaining that she is not spreading misinformation and is simply making "a living."

Her business is an alchemy fueled by social media and mistrust of public health officials, two factors blamed for more than 25 percent of eligible American adults declining to be vaccinated.

While US President Joe Biden's administration pleads with the vaccine-hesitant to take the shot, Tenpenny brands Covid-19 a manufactured crisis and a means of government control.

In an address to Ohio lawmakers in June, the osteopath pointed to online images purporting to show people who were "magnetized" after receiving a Covid-19 vaccine.

"They put a key on their forehead, it sticks. They can put spoons and forks all over them, and they can stick," she said in remarks that were soon debunked, but only after gaining a national audience.

YouTube removed that footage of Tenpenny, saying it broke the platform's rules on information likely to cause harm. Many of Tenpenny's other videos have been fact-checked as misleading or false, and several of her social media accounts were suspended or removed.

But much of her prolific output remains accessible -- illustrating the whack-a-mole problem of weeding out dangerous online content, which Big Tech has yet to solve.

Rachelle Eaton, who lives a half-hour drive from Tenpenny in the Cleveland area, watched the doctor's remarks to lawmakers in horror.

"No one wants this life," said Eaton, who suffered heart and lung damage, has to take oxygen intermittently, and is incapable of remembering simple things because of Covid-19.

"This doctor pulled a lot of people down this rabbit hole of misinformation," said the 52-year-old, who eight months later is struggling with what is known as "long Covid," after contracting the disease despite doing "everything right" -- wearing a mask and leaving home only to work. 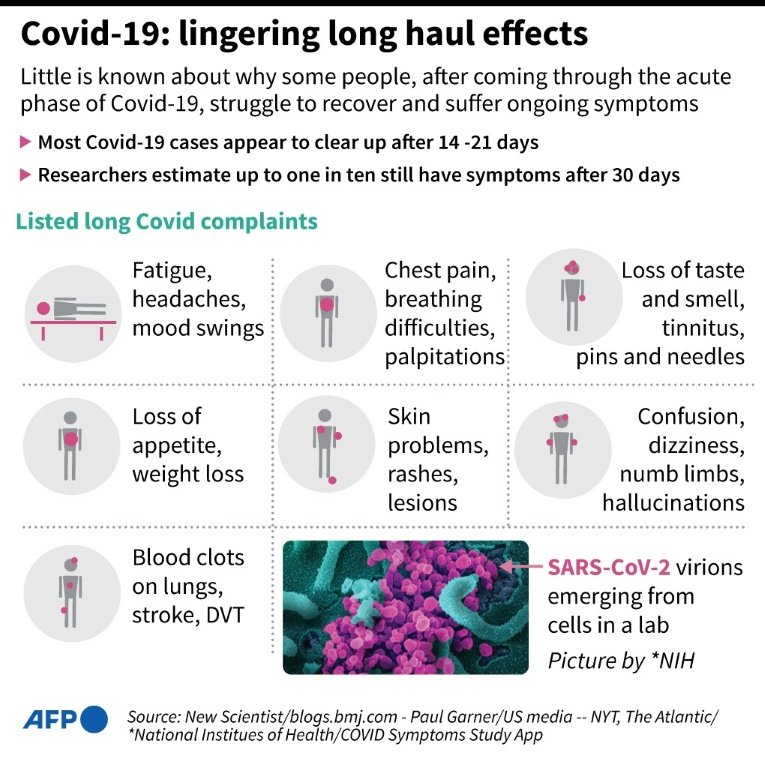 Eaton -- who later quit her job as an accountant due to her illness -- cut herself off from neighbors and co-workers who did not take the pandemic seriously. She saw people in her community succumb to the "insanity" of Tenpenny's ideas about vaccines.

"She's dangerous, and what makes her so dangerous is that I think her audience are these young moms who only want to do what is best for their children," Eaton said of Tenpenny.

In defense of her claim that Covid-19 vaccines are killing people, the osteopath cites data from the Vaccine Adverse Event Reporting System (VAERS), a federal government database.

But VAERS is no more than a collation of unverified reports of vaccine side effects, which do not prove causality. AFP has repeatedly fact-checked inaccurate claims about the system.

After watching Tenpenny's testimony, Eaton says she was puzzled "as to why her governing board didn't pull her license right then and there."

A group representing medical regulators, the Federation of State Medical Boards, warned in July that doctors spreading inaccurate Covid-19 vaccine information risk disciplinary action, including suspension or revocation of medical licenses. Tenpenny has so far faced no such sanction.

Although she is not trained in epidemiology, Tenpenny's status as a physician -- Kirksville College of Osteopathic Medicine confirmed she graduated in 1984 -- lends her posts credibility with followers, despite their medical implausibility.

But her critics describe her as a quack whose online business contributes to needless loss of life by undermining public faith in vaccines -- especially the Covid-19 shots that she casts as "deadly."

Tenpenny sold a weeks-long "boot camp" on vaccines for several hundred dollars, in the autumn of 2020 and then again earlier this year. More recently she promoted an August 5 "Freedom Crusade" event in California at $57 a ticket.

Her products are marketed through two companies, Choonadi, LLC and Requeza, LLC. Public records show them registered in Ohio in 2015 and 2018 respectively.

Tenpenny, who spent years battling the Internal Revenue Service (IRS) in court, refused to comment on whether there is a connection between her business activities and her tax debts.

Public records have for more than two decades given Tenpenny's address as a property near Cleveland's international airport, with Google images showing a tree-shaded suburban house set back on a wide lawn.

It is the address listed on tax liens repeatedly issued to her. One recorded debts exceeding $1.5 million, but IRS documents currently show unpaid assessments of more than $500,000.

In 2013, a judge cited precedent of dismissing "irrational or wholly incredible" claims in rejecting her argument that she is a "non-taxpayer." Tenpenny had sought an order that the IRS close its books on her and that "all outstanding amounts are zeroed out."

"The amount that the IRS originally claimed I owed has ballooned by year-after-year compounded interest and penalties to the present amount, which looks exorbitant," Tenpenny said.

When asked for additional details on her finances, she replied: "None of your business."

As well as the "Disinformation Dozen," she was named in a separate Center for Countering Digital Hate (CCDH) list of "Pandemic Profiteers," anti-vaccine figures who operate businesses or organizations with significant revenues.

A Facebook page set up a decade ago to mock the osteopath puts it more bluntly.

Its title: "'Doctor' Tenpenny: Getting Rich Off Stupidity."

Questioned on the accusation of profiteering, Tenpenny wrote: "We do not apologize for earning a living."

Known in the anti-vaccine movement for more than 20 years, Tenpenny published a 2008 book titled "Saying No To Vaccines," which pushed the discredited theory that vaccines cause autism.

She underpins her stance with a Christian message, in step with many of the American conservatives who have railed against lockdowns, masking and other measures to contain the pandemic. Tenpenny starkly displayed these views in a June 15 video broadcast titled "The Satanic Goal Behind the Covid Plandemic." 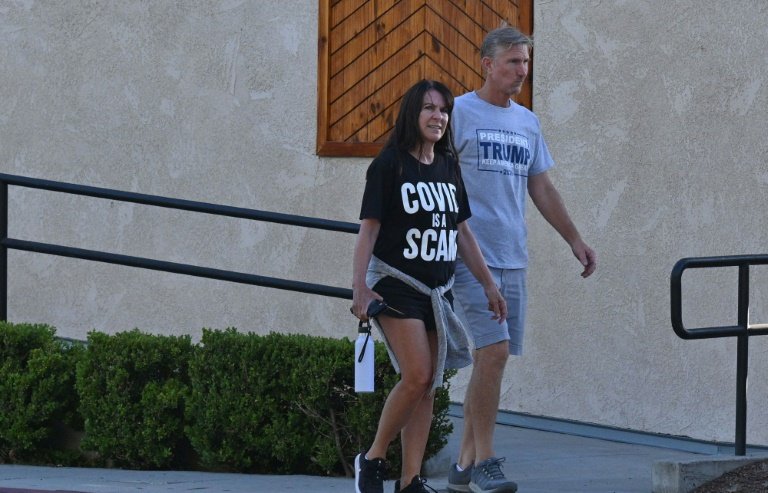 A couple walks outside Old World Huntington Beach in California where Sherri Tenpenny, an osteopath from Ohio and anti-vaccine advocate, spoke on August 5, 2021 / © AFP

In it, she linked "rulers, authorities, cosmic powers in the darkness around us and evil spiritual forces in the heavenly realm" to the disease that has killed more than 630,000 people in the United States, and 4.5 million worldwide.

Those who succumbed and got shots "need to go to the Lord with a really heavy heart and the deepest regret that they could possibly muster. They need to repent for the sin of fear," she said on stage at a July event dubbed "Reawaken America."

However far-fetched, her ideas have won a massive audience.

The CCDH earlier this year reported that Tenpenny and other anti-vaccine campaigners had a combined 59 million followers across social media platforms.

The "Disinformation Dozen," the research found, were responsible for 65 percent of anti-vaccine misinformation and conspiracy theories circulating on Facebook and Twitter between February and March 2021.

Biden referred to the dozen in July as he urged online tech giants to crack down on the spreaders of misinformation that, he said, is "killing people."

Asked to respond to Biden's criticism, Tenpenny said: "It's not just 12. There are millions who have done our research -- and are posting all over the internet. This is not misinformation."

As to whether her advice could be harmful -- even fatal -- to her followers, she replied: "How responsible will you feel as millions die from this shot?"

Pamela Glasner, a Connecticut-based author and filmmaker, filed a complaint with Facebook after watching news coverage of Tenpenny's false statements on magnetism, and hearing others repeat them.

"It's irresponsible, and it is harmful," she said.

In her viral address to lawmakers, Tenpenny referred to the debunked conspiracy theory that there is an "interface" between Covid-19 shots and 5G network towers. The remarks drew attention from social media giants, with consequences for Tenpenny.

Facebook says it has removed three dozen pages, groups and accounts linked to members of the "Disinformation Dozen." 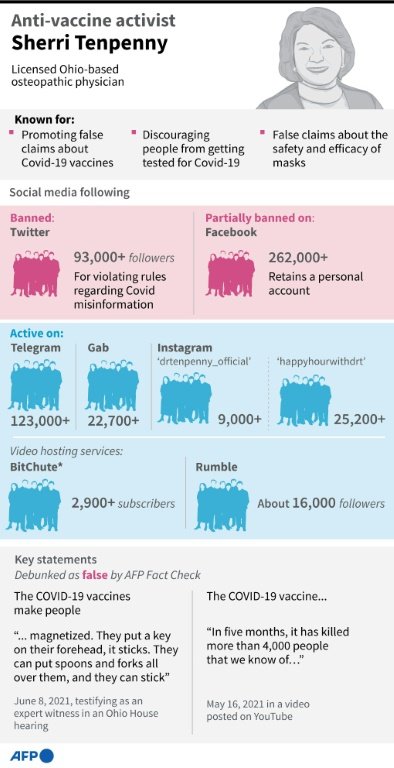 Profile of Sherri Tenpenny who has been banned from several social media platforms for misinformation violations relating to anti-vaccine campaigning. / © AFP

Specifically, it said it has "taken action against many of the pages associated with Dr Tenpenny" on Facebook and Instagram, and taken down an account associated with another of her businesses, Vaxxter.

She is particularly active on Telegram, a messaging app banned in some countries over its encryption methods. Her followers there have grown from 100,000 to more than 120,000 in recent weeks. Thousands more have turned to her on Gab, a forum that says it champions free speech.

But sales remain the core of her activities.

Callers to Tenpenny's Cleveland-area clinic are directed to "please dial three" for a supplement order. Other options offer a "paid vaccine consult" or a speaking engagement.

"If you are calling in regards to ivermectin or hydroxychloroquine, please dial four," the message adds, referring to unproven Covid-19 treatments.

For the likes of Eaton, such a business is irreconcilable with legitimate health care.

"She's a grifter in a lab coat and those are the most dangerous kind," she said of Tenpenny.