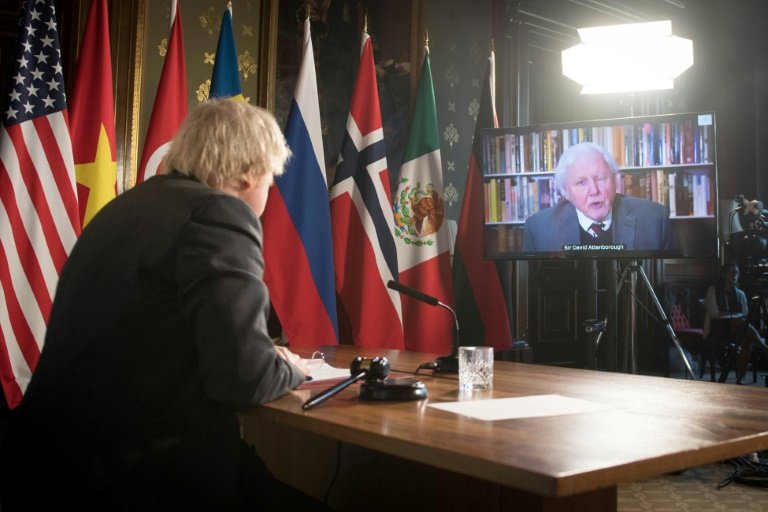 The meeting represents a departure from the traditional focus of the Security Council of averting conflicts or establishing peacekeeping operations.after having

But Johnson, who was chairing a virtual session of the council on climate and security, said: "It is absolutely clear that climate change is a threat to our collective security and the security of our nations."

He added: "I know that there are people around the world who will say that this is...green stuff from a bunch of tree-hugging tofu munchers, and not suited to international diplomacy and international politics.

Johnson stressed that helping vulnerable countries adapt to climate change and cutting global emissions to net zero will aid the protection of biodiversity as well as prosperity and security.

He evoked the examples of farmers becoming susceptible to radicalization when their crops dry up, or girls whose daily search for water takes them further and further from home and they fall prey to human trafficking.

"When are we going to do something if we don't act now?" he asked, concluding: "Whether you like it or not, it is a matter of when, not if, your country, and your people will have to deal with the security impacts of climate change."

Attenborough meanwhile likened the threat to civilization to that posed by World War II, which took place in his youth.

But the new threats "do not divide us," he said.

"They are threats which should unite us, no matter from which part of the world we come, for they face us all."

He continued: "The change needed in itself sounds immense, and of course it is, but we already have many of the technologies needed, at least for the initial changes.

"And perhaps crucially, we also have a level of public support and demand for action that I have myself never seen before. "

Britain has committed into law a target of net zero carbon emissions by 2050 and will host the COP26 climate summit in November in the Scottish city of Glasgow.

UN Secretary-General Antonio Guterres meanwhile cited a study by the Stockholm International Peace Research Institute, which found that eight of the ten countries hosting the largest multilateral peace operations in 2018 were in areas highly exposed to climate change.

"In Afghanistan, for example, where 40 percent of the workforce is engaged in farming, reduced harvests push people into poverty and food insecurity, leaving them susceptible to recruitment by criminal gangs and armed groups," he said.

The meeting will serve as a test for US-China relations, one UN ambassador said on condition of anonymity, alluding to one of the few issues where the two big powers might agree. But this is not a given.

"We should watch how the Chinese position themselves with the Americans," the ambassador said in the runup for the event.

Traditionally, the ambassador said, "you know that the Russians and the Chinese will immediately say (climate change has) 'nothing to do' with the council's issues."

Today, however, "the Chinese are more liable to be slightly open to that discussion," which "leaves the Russians pretty much on their own."

Russia does not see climate change as a broad issue for the Security Council to address. Moscow prefers dealing with climate questions on a case-by-case basis, diplomats told AFP.