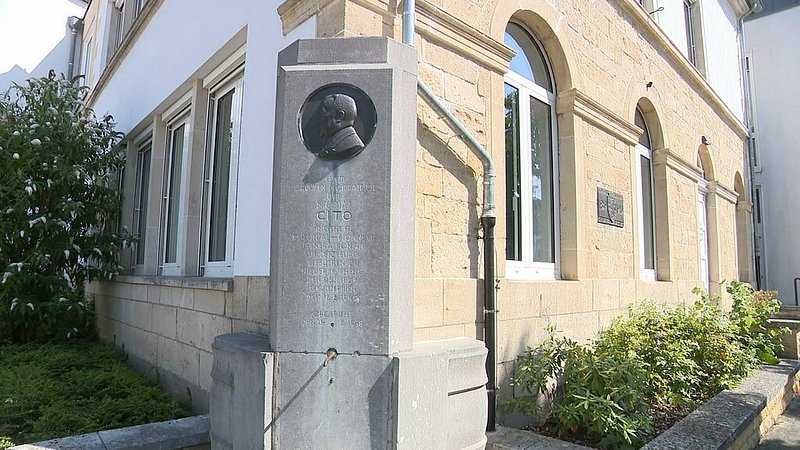 Lëtz Rise Up demands that the 1892 monument of Luxembourgish engineer Nicolas Cito, who is responsible for the death of about 5,000 slave workers, should be removed and replaced by a memorial for the victims.

"We want to walk through streets that respect us," demands the anti-racist and feminist association 'Lëtz Rise Up'. There are still numerous streets and monuments across Luxembourg that honour men who participated in the exploitation of European colonies – even if only very few people still know who they even were. This is a problem for the descendants of those indigenous populations, and a plaque in Käerjeng in particular has recently come under fire. In a Facebook post, Lëtz Rise Up called on the Käerjeng municipal council to remove the 1892 monument in honour of the Luxembourgish engineer Nicolas Cito.

Who was Nicolas Cito?

In front of the Secondary School for Health Professions (LTPS), a plaque honours the memory of Nicolas Cito, a Luxembourgish engineer who was responsible for the construction of the first railway line in Belgian occupied Congo in the 19th century. The railway line was meant to be used to transport raw materials to Europe. Around 5,000 people from Congo, who were forced to work on the project, lost their lives as a result of it.

Historian Régis Moes confirms that the harsh working conditions during the construction of the railway line between Matadi and the capital then known as 'Leopoldville', cost the lives of between 4,000 and 6,000 people. The exact number differs because "the African and also the Chinese workers involved in the construction did not really count because the Europeans did not consider it important at the time," Moes explains.

A monument for the victims, not for the white man from Luxembourg

According to Lëtz Rise Up, the plaque in Käerjeng should be removed and replaced by a different monument. A monument which does not commemorate the white man from Luxembourg, but the victims that lost their lives during the construction of a railway that was not meant to benefit them. Sandrine Gashonga from Lëtz Rise Up explains that this would also be important to raise awareness among those who are not personally affected and may not be aware of Luxembourg's colonial past.

The removal of the monument is meant to trigger a change of thinking and show that people of African descendant still suffer from the repercussions of colonialism to this day.

Municipality has 'no intention' of removing the plaque

The municipality has informed Lëtz Rise Up that it has "no intention" of removing the plaque. In other countries, such as the UK, activists have thrown red paint on statues of colonial rulers or ripped them from their sockets to throw them in a nearby body of water. Lëtz Rise Up has decided to go with a petition for the time being.

It is not the first time that the plaque has been called into question. In 2020, the artist collective 'Richtung22' put bars in front of the plaque – thus literally putting Cito "behind bars". This event is also included in the exhibition on Luxembourg's colonial past in the National Museum of History and Art (MNHA), which also highlights that the Grand Duchy's municipalities have different ways of addressing the country's colonial past.

The train with which Nicolas Cito entered what was then known as 'Leopoldville' still stands in the capital, which has since been renamed Kinshasa, as a grim reminder of the human suffering that came with it.

The full report on RTL Télé (in Luxembourgish and French):