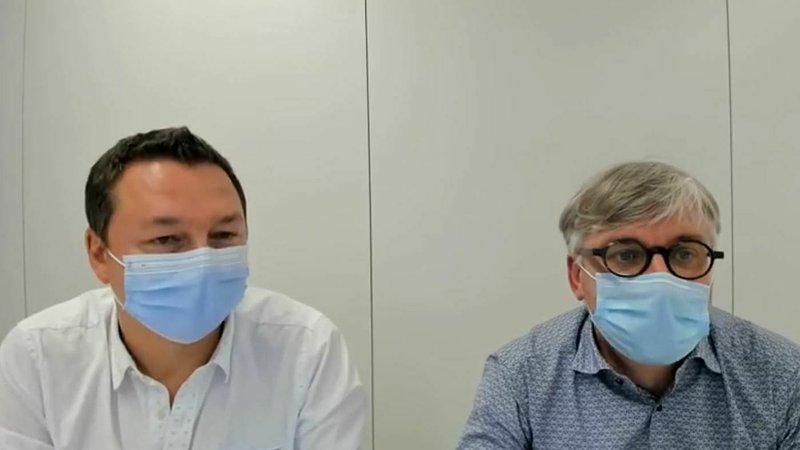 During a livestream on the Facebook page of the Ministry of Health, the health experts answered questions about the Omicron variant, which is spreading rapidly in the Grand Duchy.

The National Health Directorate reported 3,064 new infections on Thursday evening. In reality, there are probably about 25% more infections.

The contact tracing team currently has to process about 4,000 infections, as epidemiologist Dr Joel Mossong revealed in a Facebook livestream on Thursday evening alongside virologist Dr Thomas Dentzer from the National Health Directorate.

The reason why official figures record fewer cases is that a while ago, the Grand Duchy decided to exclude cross-border workers.

The experts were surprised by the speed with which the Omicron variant spread in Luxembourg. During the last two weeks in December, the new variant "completely crushed" the previously dominant Delta variant.

According to Dr Mossong, people who have not yet received their booster shot have "practically no protection" against an infection. The epidemiologist explained that Omicron is "almost like a new virus", which can easily circumvent previously built-up immunity through infection or vaccination, in the case of those who only received one or two doses.

However, the loss of protection only applies to the risk of infection or the ability to transmit the virus to others. Two doses still protect very well against severe courses of the disease. For Dr Dentzer, the current situation is yet more proof for the "immense impact" of vaccination.

The virologist pointed out that if the country had experienced 4,000 infections in a single day in October 2020, the healthcare system would certainly have collapsed. This is not the case as of late January 2022, with 15 patients currently in intensive care.

Something which stands out to the experts at the moment is that Omicron infects people who had previously already been infected with a different variant of the coronavirus. According to Dr Mossong, this is the case of "10 to 15%" of all cases, and thus significantly more common than before.

Both Dr Mossong and Dr Dentzer stressed that the booster is practically "the only option" to protect oneself against Omicron.

However, daily new infections will not increase indefinitely since the country's testing capacity will not be able to keep up anymore at a certain point. Luxembourg's labs are currently carrying out around 10,000 PCR tests per day.