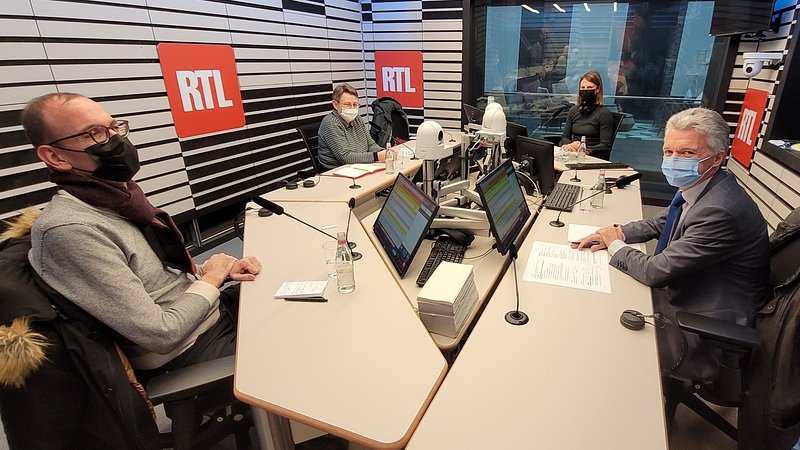 On Saturday afternoon, two members of the National Ethics Council and one member of the Consultative Commission on Human Rights discussed the societal impact of the pandemic on RTL Radio.

The guests were psychologist Karin Weyer, the director of the Centre against Radicalisation respect.lu, and a member of the National Ethics Council; economist Daniel Becker, general secretary of the Economic Council and vice president of the National Ethics Council, as well as lawyer Frank Wies, a member of the Consultative Commission on Human Rights.

Weyer opened the discussion by stating that in times of crisis, humans try to adapt to their situation and, fortunately, they are able to do so.

Luxembourg's residents have learned to "find a new normality" within the crisis. However, Weyer stressed that many people have to relearn to live with risks.

What has changed recently, according to Becker, is "the nature of the insecurities", with the vice president of the National Ethics Council adding that people must learn to deal with the situation and "live with the virus", as there is little chance of it going away again.

For Wies, the current crisis is a reminder that the world is inherently insecure and that western societies have previously lived "in an illusion". The coronavirus crisis cannot be ignored and affects everybody, contrary to other crises such as the migration crisis or climate change, Wies said.

Communication during the pandemic

The pandemic had and still has an impact on the way we handle discourse. According to Weyer, people must relearn to talk about disagreements and differing opinions with each other, and also to listen to what the other person has to say.

It is also "extremely important" for those in charge to communicate transparently what is known and what is not. Nobody can predict what the situation will be like three weeks from now, Becker added.

For Wies, the actual end goal and the different paths to get there are not given enough importance in public discourse. While it is certainly not easy for politicians to take decisions in times like these, they should be careful to act "proportionally".

Weyer argued that the fact that it is simply not possible to know everything today is in conflict with people's "great desire" for security. This is an area where Weyer thinks a lot of trust has been lost because "politicians are not clearly communicating how prone to change the situation is".

How to deal with fake news?

A "broad debate" must be conducted regarding how to fight against false claims, i.e. fake news. At the moment, it is not illegal to post false information online. In addition, there is the problem that many claims are being posted by anonymous users, Daniel Becker explained.

Lawyer Frank Wies stated that expression of opinion "has its limits". Wies sees parallels to "incitement to hatred", which is a criminal offence in Luxembourg.

In any case, it is a "question of impact". When renowned scientists and doctors, such as Dr Didier Raoult in France, claim something, it naturally has a greater impact.

When such people share false information that actually presents a serious risk of harming others, "it should be punishable by law".

However, an "oppressive approach" alone is not enough, Wies stated. All three guests agreed that efforts need to be made to increase media literacy, in particular regarding social media.

Does the state have an obligation to protect people from their own stupidity? According to Karin Weyer, "everyone is allowed to ruin their life in whatever way they see fit".

However, Weyer also thinks that people should at the same time be supported in a way that allows them to recognise disinformation and lies. Older generations especially need help to adapt a more critical approach towards social media platforms, seeing as contrary to the younger generations, they did not grow up with them.

Social media platforms are rarely adequate places for debate. Usually, discussions just devolve into one person shouting their opinion at another and vice versa, according to Weyer.

In order to prevent people from getting stuck in their own echo chambers, where they might quickly become radicalised, forums must be created that allow for "controversial debates and arguments". However, Weyer stressed that Luxembourg "has never been really good at that".

In this context, the Alternative Democratic Reform Party (ADR) has taken on the "classical role of a moocher", according to Frank Wies.

The lawyer stated that while a certain opportunism is "almost normal" in politics, the ADR is "probably not aware" of the impact it has on a society when a party goes around criticising newspapers, attacking an editor-in-chief, and even filing a complaint against him.

If people get mixed up in these circles, it is in any case important not to abandon them, Karin Weyer added. Bridges should never be burned because in that moment when people might be looking for an exit, they need to be able to "return" somewhere and often that somewhere is friends and family, or places like the Centre against Radicalisation, Weyer concluded.