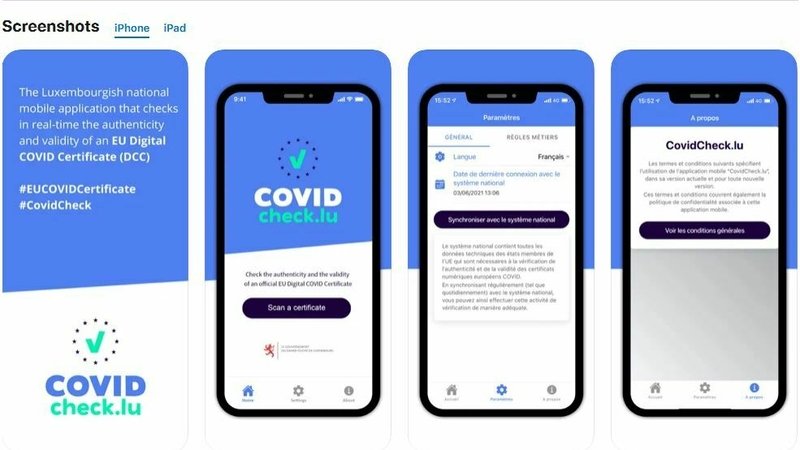 On Monday the new Covid law, concerning the implementation of the new CovidCheck regime, will be put to a vote in the Chamber of Deputies.

On Thursday morning, members of the Parliamentary Health Committee reviewed the text of the bill, which will allow the CovidCheck process to be introduced in businesses and administrations. This will mean employees will have to prove that they are vaccinated, recovered, or in possession of a negative test result.

On Wednesday, the Council of State proposed that in companies or administrations, the system should only apply to people who work there. However, MPs debated whether visitors or guests to a workplace should also respect the CovidCheck system.

Test vouchers will be issued to people who have either received a first dose of the vaccine, or people who cannot be vaccinated for health reasons. Around 30 people in Luxembourg currently possess a medical certificate to prove they cannot have the Covid vaccine.

In future, Luxembourg will accept a larger number of vaccine certificates, including vaccines issued abroad, as part of the CovidCheck system. The bill will seek to include acceptance for all vaccines currently approved by the WHO.

MP and president of the Health Commission Mars Di Bartolomeo was appointed rapporteur for the bill.  The debate and subsequent vote on the text will take place on Monday 18 October at 9am. If approved, the law will come into effect on 19 October, lasting until 18 December, while provisions regarding the application of the CovidCheck regime in the hospitality sector will come into force on 1 November.

These amendments plan to only allow non-certified rapid tests in schools, care homes and hospitals, although they will be permitted in Horesca establishments until 31 October. Beyond this date, customers will require either a PCR test or a certified rapid test in order to fulfil CovidCheck requirements. These tests will be the responsibility of the customer going forward.