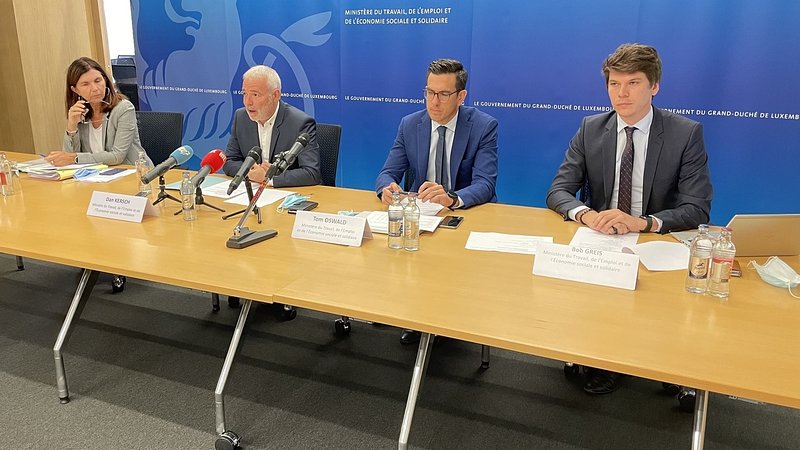 State aids during the pandemic

Since the start of the pandemic, the state has paid out €1 billion and 164 million in partial unemployment to companies.

This is the figure given by Minister of Labour Dan Kersch during a press conference on Wednesday morning. Over 97% of the loans have so far been reimbursed. The state is currently collecting the rest. However, the Minister stated that €734,000 can no longer be recovered, in particular because the respective companies have since declared bankruptcy. The Minister from the Luxembourg Socialist Workers' Party (LSAP) also issued a clear warning during the press conference: Every company that has spent the funds from the partial unemployment scheme on anything other than the salaries of its employees, will be denounced to the public prosecutor's office for fraud. So far, the Inspectorate of Labour and Mines (ITM) has denounced five such cases of fraud. Others could follow, Kersch stressed.

CovidCheck could be introduced at the workplace

Upon enquiry, Kersch stated that he is generally open to the idea of introducing the CovidCheck system at the workplace. The measure could be integrated into the next Covid-19 law, in particular under the section dealing with work safety. However, the Minister also stressed that the main priority should remain raising the vaccination rate to at least 85%. On Tuesday, trade union representatives expressed reservations regarding the introduction of the CovidCheck system at the workplace.

Kersch also presented the planned anti-mobbing law, which will require employers to take measures against mobbing at the workplace while giving employees the right to denounce misconduct to the ITM, which will then be required to react within 45 days.

The draft bill for the 'right to disconnection', i.e. the right of employees to not be bothered with work-related messages and activities outside of their regular working hours, is also ready. Kersch explained that the Ministry has for the most part followed the suggestion of the Economic and Social Council. Moving forward, every company will be required to impose internal rules regarding disconnection which have to be worked out alongside the personnel delegation.

Another project, which would stipulate a maximum of 1,714 hours of short-time work per year, is already underway, but ultimately has to be signed off by a sectorial tripartite. The exemption to go over the legal limit of 1,022 days per year during the pandemic runs out at the end of 2021. The proposed draft bill is meant to offer a long-term solution. Kersch stressed that short-time work must "remain the exception". At the same time, the Minister announced additional state aid measures for the business hotel sector in 2022.

Following the floods in July, 159 companies applied for short-time work due to force majeure. So far, the state has paid out €266,000 to 76 businesses.