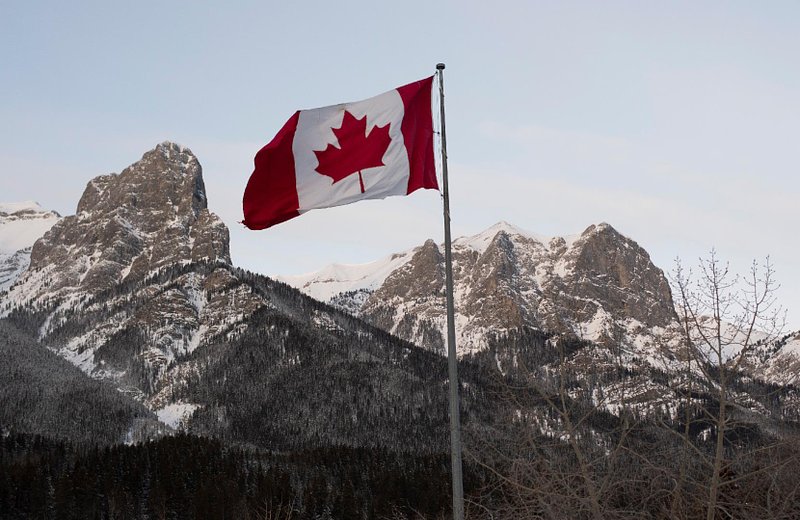 Social media posts claim euthanasia is the sixth leading cause of death in Canada, and that it is being used to "kill poor people." This is misleading; Canada does have medical assistance in dying (MAID), but the national statistics agency does not consider it an official cause of death, and most cases involve people with serious underlying health conditions.

"In Canada, legalized euthanasia (MAID) has become the sixth leading cause of death," says an August 13, 2022 tweet with thousands of interactions.

A similar claim was made in a video with tens of thousands of views on Facebook and Instagram, which circulated in August with text saying Canada is "literally killing poor people." 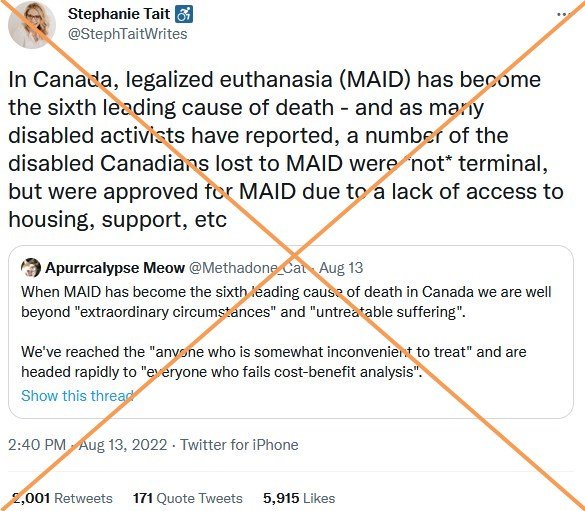 The federal government says the MAID program -- first passed in 2016 following a 2015 ruling by the Supreme Court of Canada -- is intended for people with a "grievous and irremediable condition." Mental illnesses are currently excluded, patients must be at least 18 years old and two independent health professionals have to approve the request after receiving informed consent.

Bill C-7, which received royal assent in March 2021, expanded access to MAID by repealing an eligibility provision that required "a person's natural death be reasonably foreseeable." This led to an influx of participants; the program's third annual report found "10,064 MAID provisions reported in Canada, accounting for 3.3% of all deaths in Canada" in 2021.

But claims that MAID is the sixth leading cause of death are misleading, according to Statistics Canada.

"Medical assistance in dying is recognized as the manner of death and not the cause of death," said Jadyn Yelle, a spokesperson for the national statistical agency, in an email.

She said the illness, disease or disability that prompted the request for MAID "is recognized as the underlying cause of death and tabulated for statistical purposes."

"As such, it is inappropriate to situate it among the leading causes of death," she said.

Jennifer Chandler, vice dean of research in the University of Ottawa's law faculty, said the claim that MAID is used to kill poor people is "a highly misleading and inflammatory statement."

The program has caused controversy in the past. In April 2022, a flurry of news coverage followed the case of a woman with chemical sensitivities who sought MAID after an unsuccessful attempt to secure affordable housing that did not aggravate her condition.

However, Chandler said safeguards exist for those whose conditions are not fatal. For example, Canadians seeking MAID may be offered "counseling services, mental health and disability support services, community services, and palliative care," according to a government webpage.

The vast majority of Canadians who receive MAID have serious underlying health conditions, according to the program's third annual report.

Only 219 individuals, or 2.2 percent of all MAID cases, were people whose natural deaths were not reasonably foreseeable, according to the report. Almost half of them cited underlying neurological conditions.

The government is studying "how MAID on the basis of a mental illness can safely be provided," with an aim to expand access by March 17, 2023. A May 2022 report offered recommendations, but there were concerns that some provisions would not adequately protect people suffering from mental illnesses.

AFP has fact-checked other false and misleading claims circulating in Canada here.