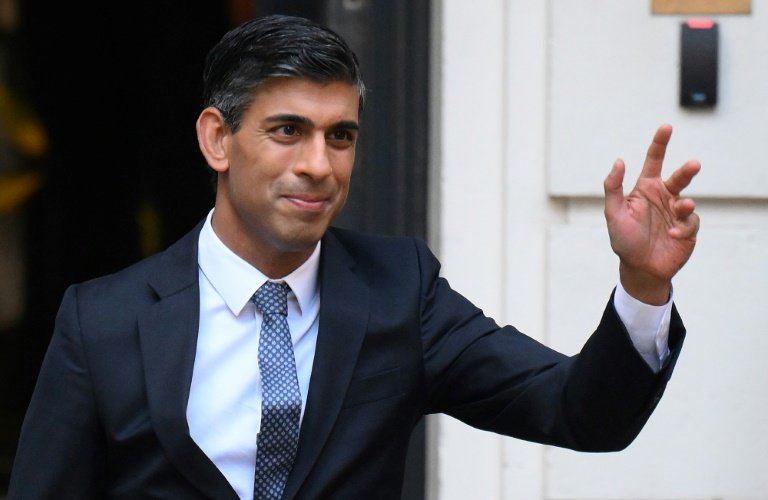 European and US stocks rose Monday as markets reacted to the news that former finance minister Rishi Sunak was to become Britain's new prime minister.

Wall Street stocks also advanced for a second straight session, boosted not only by the signs of greater political normalcy in Britain, but also by optimism about corporate earnings.

Investors are hopeful about the upcoming deluge of earnings reports, particularly from large tech companies that have often outperformed earnings expectations.

"Earnings season is coming in much less badly than I think the market was anticipating," said Andy Kapyrin, co-chief investment officer at RegentAtlantic.

News that European gas prices were at a four-month low also spurred traders. The reference Dutch TTF dipped below 100 euros ($99) for the first time since June, to 96.50 euros per megawatt hour.

Analysts at Energi Danmark said the price fall was due to mild weather in Europe and high levels of gas stocks, with governments replenishing reserves before winter after supply cuts from Russia.

All eyes were on Britain as Sunak prepared to become the country's third prime minister in less than two months following the resignations of Boris Johnson and Liz Truss.

His last rival for leadership of the ruling Conservative party, Penny Mordaunt, dropped out of the race on Monday, clearing the way for Sunak to become prime minister.

"The pound started the week trading higher, as many see the new potential PM as a source of some stability, particularly when compared to the chaotic term served by the Truss government, which saw massive volatility across markets," noted XTB chief market analyst Walid Koudmani.

"Many see Sunak as the final chance for the Conservative party, as he has managed to maintain some credibility" compared with the uncertainty of the Truss and Johnson premierships, he added.

The eurozone was meanwhile looking ahead to Thursday, when the European Central Bank is expected to announce another bumper rise in interest rates aimed at curbing sky-high prices.

Back in Asia, Hong Kong stocks plunged by more than six percent to a 13-year low Monday as investors were spooked by extending Xi's zero-Covid strategy.

The policy has been blamed for the sharp drop in growth in the world's number-two economy and, while data showed Monday that it expanded more than forecast in the third quarter, traders remain on edge.

"The more centralized power becomes, the more the risk of overzealous policy implementation based on directives from the top," Duncan Wrigley, at Pantheon Macroeconomics, said.

"This happened in some of the lockdowns in the second quarter."