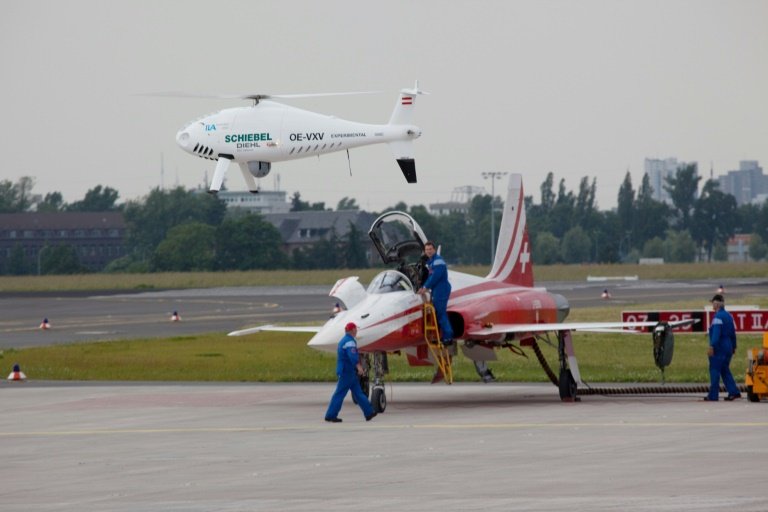 Drones with night vision that can fly at more than 200 kilometres (120 miles) per hour are the latest tools being used to monitor the most volatile areas in the conflict in Eastern Ukraine.

Along with 700 human monitors, the Organisation for Security and Co-operation in Europe (OSCE) is using an armada of short-, medium- and long-range drones to check peace agreements are being implemented in a conflict that has cost more than 10,000 lives over four years.

The most impressive of these assets is the Camcopter S-100, which has a range of 160 km and can fly for up to six hours at a time, all the while transmitting high quality images.

"It was incredible, I saw guys smoking cigarettes at night who were five kilometres away from me," a former Camcopter S-100 operator told AFP.

The OSCE stopped using drones in the region in August 2016 due to an upsurge in fighting in the war that has left the West's ties with Moscow in tatters.

But its Special Monitoring Mission (SMM) last week re-launched the use of the long-range drones following a period of relative calm after a fresh ceasefire between the Ukrainian army and Russian-backed rebels was agreed.

"The use of technology such as long-range unmanned aerial vehicles allows the SMM to monitor the situation more closely, in particular in areas that are difficult to reach by ground patrols or where our monitors are restricted, threatened or at risk," Principal Deputy Chief Monitor Alexander Hug said.

The OSCE hopes its long-range drones will be help it spot heavy weapons like tanks or missile systems, the deployment of which in the areas close to the front line are banned by peace agreements.

"We expect the sides, as signatories to these agreements, to not interfere, by jamming, shooting or otherwise, with the operation of these UAVs," Hug told journalists.

Hug added that the use of these vehicles was suspended after at least three of them were downed by surface-to-air missiles.

"It's because these assets and our monitors observe facts that (are) uncomfortable and inconvenient to read for some," Hug said.

He stopped short of saying which side was responsible for shooting down the drones.

But in June 2016, when the OSCE reported the loss of two of their drones within a week, the mission said the evidence strongly suggested one of them was hit from a rebel position northeast of the insurgents' de facto capital of Donetsk.

The monitoring team had another surveillance vehicle shot down shortly after it spotted a powerful surface-to-air missile system in a separatist region northeast of Donetsk in May 2016.

Last Wednesday, a white helicopter-like machine with the "OSCE" inscription on its side took off for a 10-minute test flight from a field in Stepanivka, a Kiev-controlled village some 30 kilometres from the front line.

"The SMM's long-range UAVs launched from here ... will operate over Donetsk and Lugansk regions on both sides of the contact line," Hug said.

The costly asset's two cameras can film at night time when mobile ground patrolling is restricted because of security concerns, the OSCE said in a statement.

The conflict stems from a revolt that erupted across parts of the industrial east of Ukraine against the pro-Western government in Kiev in April 2014.

Ukraine and the West accuse Russia of stirring up the unrest and sending soldiers and equipment across parts of the frontier currently under rebel control, a claim the Kremlin denies despite overwhelming evidence.

Built by the Austrian company Schiebel, the Camcopter S-100 drones reportedly costing hundreds of thousands of US dollars each have been used by a number of armed forces, including the French navy.