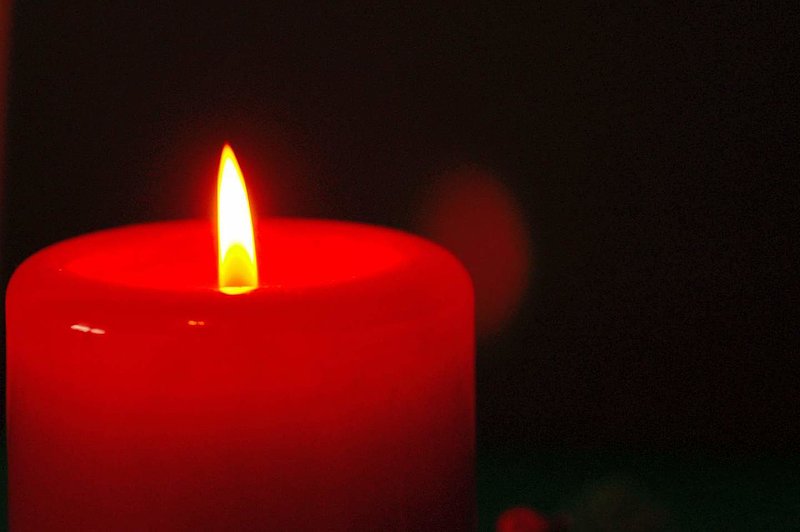 His Eminence, Archbishop Hollerich, encourages us all to light a candle for Easter.

Lisa Burke sat down for a long phone call with His Eminence, the Archbishop of Luxembourg, during this - Holy Week.  Here is their conversation.

Lisa: Your Eminence, thank you so much for joining us on RTL Today in this particularly special week for Christians - Holy Week. Now, we are sitting amidst a global pandemic where everyone has to stay at home as much as possible. So as we approach Easter, when many people want to go to church, how can You disseminate your messages of comfort?

Archbishop: I’ve given a video message on our homepage Cathol.lu and I also wrote a message which will be printed in the newspaper. There will also be a special message addressed to the elder people who suffer quite a lot through this necessary confinement.

A Candle for Hope

Archbishop: I also invite people to light up a candle on Saturday night at eight o'clock and to put it in front of the door or on the window in order to show hope, and on Sunday at noon all the bells will ring for 15 minutes. So some small signs.

Lisa: As You say, the older people in our community here in Luxembourg are perhaps suffering the most. They are a vulnerable part of the population. On that point, death is an ever-present part of our circle of life, and unfortunately for those who do die during this time, the family, the friends and relatives cannot bury their loved ones, or grieve in the manner they might be accustomed to. How are You managing this?

Archbishop: I think that is very hard for people. And I feel with them, because already people are not allowed to assist their beloved ones at the moment of their death, and afterwards the funeral has to be done in a very quick way, and no mass can be celebrated afterwards.

But I think once confinement will be lifted, I would like to celebrate a Mass of Thanksgiving in the cathedral, and at the same time, it will be a mass for all the people deceased during this pandemic.

It's the same in every pandemic. I've just read a book about the Great Past and Middle Ages and we had the same - people could not grieve for their loved ones. Some elder people really regret that they are not able to assist funeral services of friends, that they cannot say goodbye to them.

Lisa: Well it's wonderful that You will hold something like a Memorial Service and a Thanksgiving Service when we're all free of this confinement. 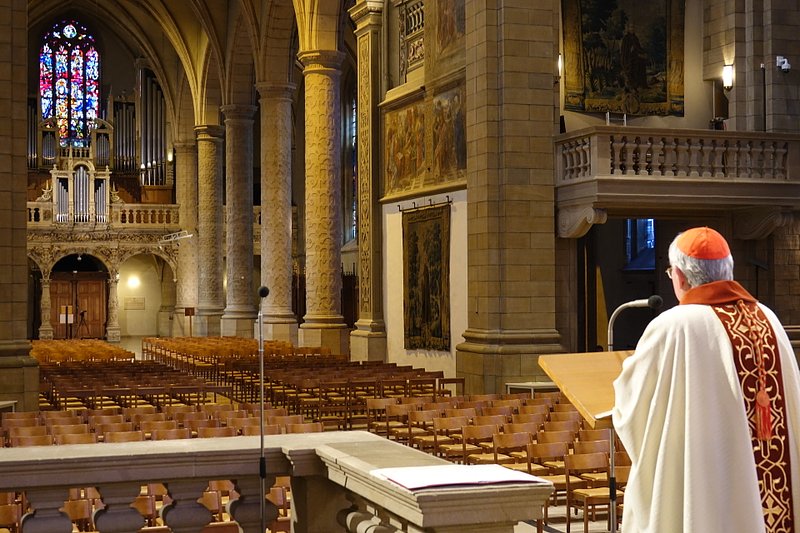 Now, thinking about community in a larger way, we're in this peculiar period of our lives, but as You say, not peculiar to history. This has happened before through the plagues of history. Do You feel a stronger sense of community in our isolation?

Archbishop: There are signs of community. You have the scouts who help a lot of elder people. You have many initiatives of people who want to work as volunteers. My mother herself, she's isolated. She lives in her apartment and somebody's doing the shopping for her. So there are a lot of signs of solidarity and I would like to thank all the people for the acts of solidarity.

I phone my mother every day and for Easter I invite her for an Easter meal. We eat together while eating apart. I ordered the meal from a caterer and they will send it to her, so we should have the same meal by distance.

But it's also true that our society is becoming more and more individualistic. And I think in times like this Pandemic, we see that the first community of solidarity is the family - all types of family - I do not want to make any discrimination. And these families have to be strengthened afterwards I think, because we need them.

We cannot just live as individuals. And also, I think initiatives like neighbourhood initiatives should be promoted, should be fostered afterwards, because we rely on these first structures of solidarity.

But I think that our government is doing a very good job, and that Christians, as well as non-Christians, people from other religions, people with no religion - we all have to collaborate, to work together so that this catastrophe passes quickly.

Working with the Refugee Camps in Lesbos, Greece

Lisa: Now moving on to other parts of Your life and on-going commitments. You have a great affinity to working with the refugees and migrant communities. And I believe You were asked by the Pope, no less, to visit Lesbos, one of the Greek islands. What was it like to be asked directly by the Pope?

Archbishop: I felt happy, I must say, because there was a trust and trust is always a sign of love in fact. And it was a great experience for me; a terrible experience also, because the camp of Moria in Lesbos was already packed, more than packed, at that time. 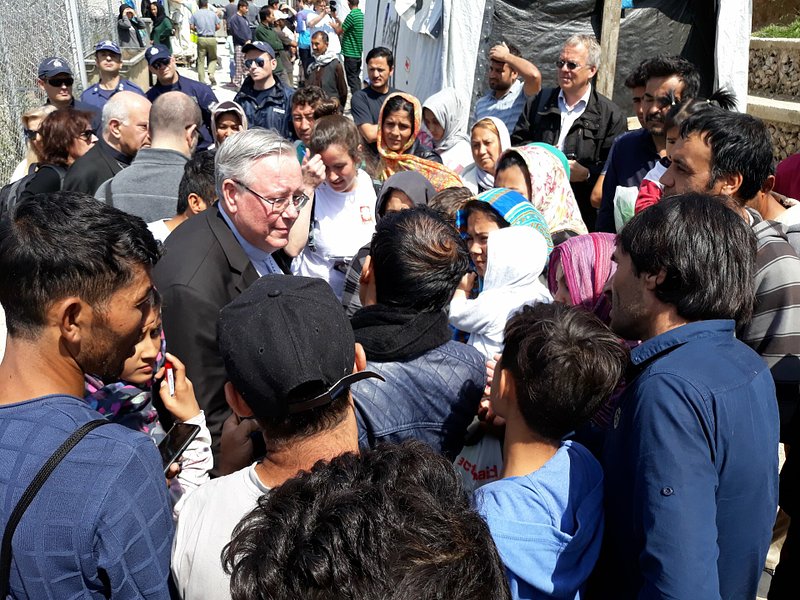 And the eve we arrived we did an unofficial visit in the unofficial camp. So as not only to be shown things which people wanted us to see, but to see reality. And even now imagine the same camp but packed with thousands of people, more, my heart sickens.

And it is clear, and I want to re-state, that Greece has to build other refugee centres in the country outside of the islands, because if the virus enters these camps people will die like flies.

Lisa: Well I believe it has reached the refugees.

Archbishop: Yes, yes. So we have to react quickly. Otherwise it will be the shame of Europe, that in Europe, we have let poor people die.

Lisa: I don't know what to say to that, other than it's wonderful that You can use Your voice to call for action across Europe, because of course within the countries we're living in already we are in a very privileged place to have such fantastic hospital facilities.

Archbishop: And I also am happy that Luxembourg takes in 11 children from Lesbos, because the numbers of children is very high, and you can imagine that they are, especially if they are non-accompanied, they are the weakest people in this camps.

In these camps, you can imagine there are not only good people, but there is also crime structures and so on, rape, and all kinds of evil. And women and children have to be protected. And I'm very thankful for the Ministry of Foreign Affairs, the Minister for Foreign Affairs, to have accepted these children in Luxembourg.

Lisa: That's a wonderful story. Now just moving back to Luxembourg, may I ask, what is the Catholic population of Luxembourg looking like? Its health - is it stable, is it shrinking or growing?

The Bishop for All

Archbishop: It's a very good question and it’s, I think, the answer is a difficult one. The traditional Luxembourg communities are shrinking. So that is what most Luxembourgers see. But the new communities of different languages, they are growing.

And I am the Bishop for all, because baptism has nothing to do with nationality. So I am the Bishop of the Portuguese as much as of the Luxembourgers, and of the English speakers here in this country.

Lisa: And on that point, of course, one of the the beauties of Luxembourg, but also perhaps one of the difficulties, from a governmental point of view, and from Your perspective, what languages You choose to use becomes rather complex, when you mentioned the English, the Filipino communities, Portuguese, Italian… there are so many languages to serve.

Archbishop: Yes. So already when I celebrate mass in the cathedral, I do the homily in French and Luxembourgish, in two languages.

And I try to visit the different communities. 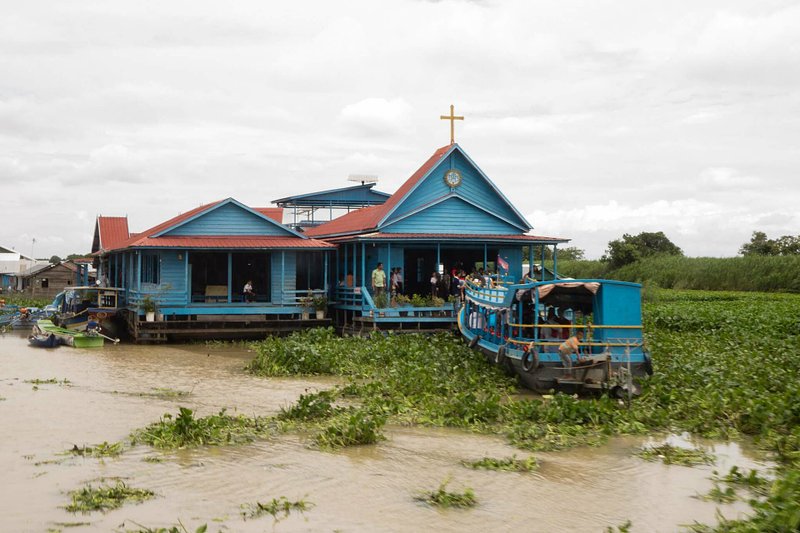 Pilgrimage to Thailand with young people from Luxembourg, summer 2019 / © cathol.lu

You know that I do very often trips with young people during summer. So we went three times to Thailand. And each time we build something. This time we built the chapel in a small university college for tribal people. And these young people who come along for such a trip - they are so many different nationalities. So normally then I do the homily in English, French and Luxembourgish, and people want to communicate with each other.

Archbishop:  Yes, and young people are very open for communication. 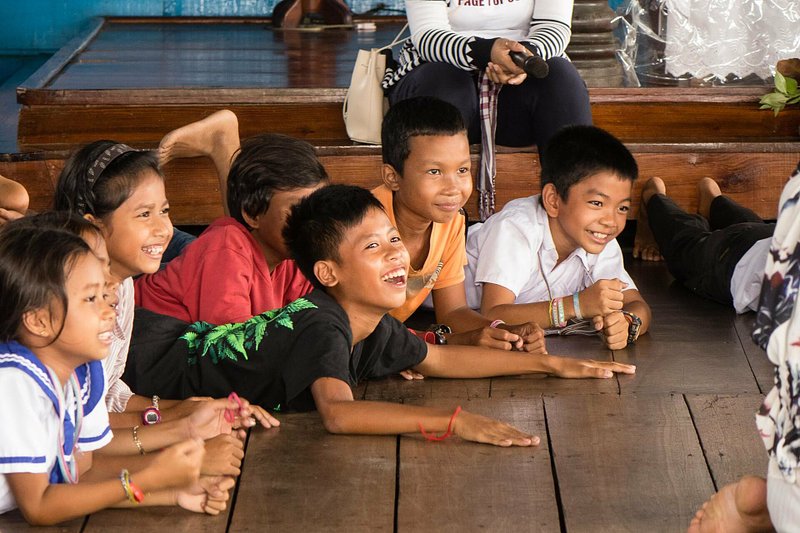 Archbishop: There have been married priests in the church. So, that priests live in celibacy is not a command of divine law. It's not the wish of God. It has become the custom of the church. And for a long time the church did very well with this custom.

But I think from time to time you have to assess reality. And many people demand, or are asking, for priests being able to marry. So let's discuss it in the church.

Lisa: And just an extension of this in a separate way - and I ask these questions because of the population size of certain Christian communities in countries such as Luxembourg, the UK, Ireland as well… Do You believe women should be allowed to become priests?

Archbishop: I can not say yes or no because I just do not know. But what I know is that women have to share what we could call power in the church.

It is not possible nowadays that decisions are only taken by men. So decision making, what you could call the wheels of power, should be shared by women. That is essential.

Because baptism of a woman is as valid as baptism of a man, and God has the same love for a woman as for a man.

So I think mentalities have to change. So your question, I think we have to put everything in the way so that women can fully participate in decision making. And when we are on that way, then we also can discuss the topic of priesthood.

A Prayer for Easter

Lisa: Thank you for those answers. And just finally, Your Eminence, I would very much like it if You could leave the English speaking community of Luxembourg with a message during this very special Holy Week.

Archbishop: So first of all it's great to have you in this country. And I know that especially for the English speaking group, many have friends, even a spouse, with a different Christian concession. We have Anglicans, we have free churches, we have the Catholic Church, and please celebrate Easter in your family, with a short prayer.

And I think that if we you celebrate together, if you succeed in saying, even if it's only a short prayer, you also succeed in overcoming the separation of the churches.

So I encourage you, I'm happy that you are here.

I know that you are very much afraid for the people - your parents, your grandparents - in the different countries.

I shall pray for them, and I pray for you.

Lisa: Your Eminence, thank you so much for such a blessed message this week and we hope that You stay well, and we very much look forward to the opening of the cathedral once more where everybody can share in the message of thanksgiving with You.

He's a fan of RTL Today!

Archbishop: I have the app for RTL in English. And I always look for the news. Very well done!

Lisa: We are very, very pleased to hear that. Thank you so much indeed!

Archbishop Hollerich worked in Japan for 23 years and speaks Japanese.

If you have a story to tell, or want telling, get in touch via lisa_burke@rtltoday.lu or contenttoday@rtl.lu