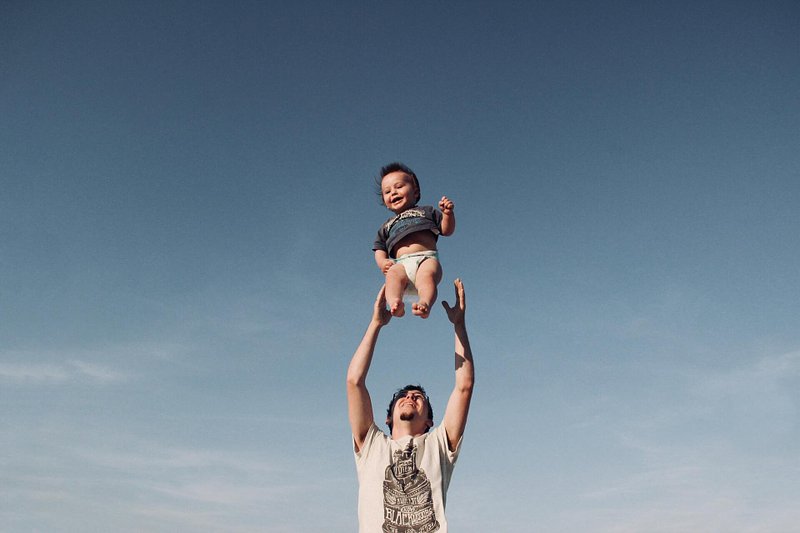 We shouldn't look down on men who choose to work part time, argues Charlotte de Vreeze-Nauta, they're just doing their share of housework and childcare.

Before I had kids, I worked full time. When I became a mother, I scaled back to working three days a week. The other two days, I was at home with my daughter. It wasn’t called a mummy day or anything like that. I just worked part time. Period.

So why is it, that when it comes to men, they don’t say they work part time? They call it having a daddy day.

This may seem like a matter of semantics, but I think there is more to it.

I think it has to do with the inequality between men and women when it comes to work.

Despite how far we may have come as a society when it comes to equal rights for men and women, the reality is that there is still a huge difference between the two sexes when it comes to work. And due to this inequality, men feel embarrassed to say that they work part time.

First of all, women are still often paid less than men for the same type and level of work. We regularly read or hear about it in the media when such a salary discrepancy within a company has been resolved. The simple fact that it is regarded as newsworthy, says enough.

So, when it comes to deciding which parent stays at home to look after the children, it is often the mother. Because a couple will almost always decide to keep the job of the partner with the higher salary.

Secondly, the tasks in a household are not evenly distributed between husband and wife. Almost all my female friends, and many of them work full time, still do 80% of all tasks related to their house and children.

Thirdly, it is much harder for men to get their boss to agree to part time work than it is for women. In many organizations, men that want to work part-time are not regarded as being serious about their career.

A male friend received rejection upon rejection when job hunting because he was looking for a 32 to 36 hour per week job. The minute he let go of that demand and applied for full time work, he was hired.

It seems to be deeply embedded in our society: men rarely work part time.

Just look at the numbers: of the overall Luxembourgish work force, 17.6% work part time and 78% of those are women.

The good news is that this is slowly changing: numbers of men requesting part time work are on the rise. Did you know that in 2021 more than half of all part-time working requests came from men? More than half! And yet, only 21% of the part time workforce are men, because they are very often stigmatized.

Fourth point, maybe not as valid as the previous three, and it will certainly invite a lot of critique, but I’m going to mention it anyway. Many, many men want to be the provider of a family. They want to take care of their wife and children. They want to go ‘hunt for fish and find the meat’ to feed them. And these men want women who are willing to ‘play the second violin’ when it comes to careers.

Once, a long time ago, when I was working as a bartender in Amsterdam, a group of guys I had been talking to asked what I was studying. I answered their question, but I also jokingly added that it didn’t matter what I studied because I just wanted to find myself a nice man, look after our children and have my husband’s dinner ready and wait for him with the newspaper and a drink after a long day’s work.

I kid you not about what happened next: one raised his arms and cheered ‘they still exist’; another started running around, screaming ‘fetch me a ring, fetch me a ring’, while a third dropped to his knees and proposed to me.

Sure, it was all laughs and jokes, but there was a truth to it. It may have happened 20-something years ago, and some things have surely changed, but if you laughed, even smiled, at the above, it means that you can relate to it and that is a sign that there is plenty left to change.

This whole ‘taking care of the wife and kids-thing’ stems from a long time ago when men went out to hunt, and I fear that it is engraved in men’s DNA. And from this comes an insecurity thing – many men get jealous of anyone that makes more money or is more successful.

So having a wife that is more successful is not what they want. They don’t want to feel inadequate in the safety of their home. It may be excruciatingly old-fashioned and backward, but I think this is the ugly truth for most men over 40.

And we can turn this around too. Many women get their kicks from an ambitious man. A man that wants to take care of his wife. Sure, women want to be independent. Make their own living. Want to evolve and develop. See how far their talent and ambition will take them. Just like men get to do all the time.

But I am convinced that a vast majority of women think some hot shot professional in whatever field of expertise is more attractive than a man that looks for a part time job because he wants to have a daddy day, complete with nappy bag, wet wipes and pacifiers. Unless they look like Jason Momoa, of course…

But most importantly, and this is where it gets politically ‘tricky’ in today’s world: there’s a little thing called biology. When it comes to the roles of men and women, one cannot deny the role of biology. It is after all why women stay home after a baby is born.

It’s the women who get pregnant (couples that say ‘we are pregnant’ make me want to throw up). It’s women who give birth. It’s women’s body’s that need recovering, it’s their breasts that, as seen in an ideal world, must feed the baby and it’s their hormones that need to rebalance.

Men can help women, they can bathe a baby and spend time with it, bond, etc. But it is and will always be women that give birth. And giving birth is not just a thing you do on an average Tuesday afternoon between your lunch break and the next meeting. It’s a little more than that and recuperating from it requires time. There’s a reason that more and more countries are prolonging the parental leave for mothers.

So, because of pregnancies, women’s careers are interrupted, while those of men can continue to flourish. Plus, having children always happens in the best years career-wise. The age between thirties and early forties is THE time to make one’s professional mark, give it their all and climb that corporate ladder. And that is not as easy in a part time job as when one can fully dedicate him or herself to it.

It may suck, but I think that we are still quite far from total equality. And with biology in the mix, we may never reach it.

So where does that leave us?

We simply need to think, be and do better still. To not look down upon a man that ‘brings home the meat’ on a part-time basis. To not regard men with a daddy day as soft, ambition-less walkovers, to broadly allow men to work part time just as much as women (without them being mocked about it), to further educate men that household work can be done just as well by men as by women, and to stop using the phrase daddy day by fully owning up to a man’s wish to work part time.

Just as women do.