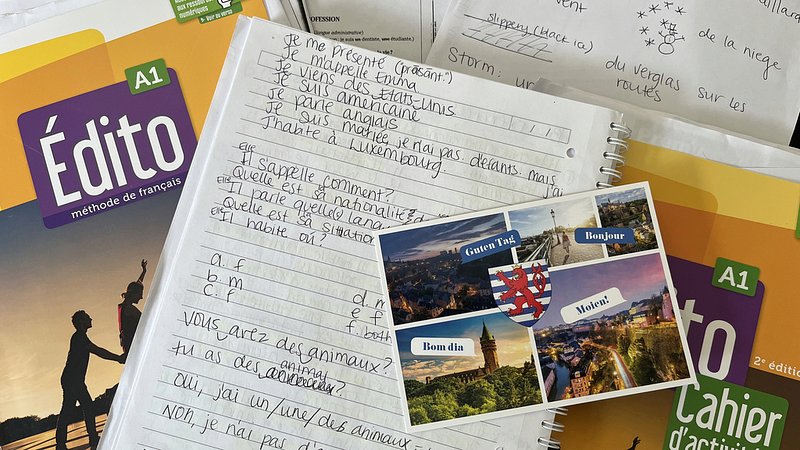 "Moien! Bonjour! Hallo!" The many languages of Luxembourg can be quite confusing to a newly arrived non-European.

Upon first arrival, from what I could discern around town, learning French seemed to be a no-brainer. Around the part of Luxembourg where I live, it seemed that most people in shops, grocery stores, and socially, were speaking in French. All of the letters I receive in the mail, and then shamelessly Google Translate, are in French.

When I went off to buy a car, almost all salesmen began with a begrudging "Bonjour". Yet, the more time I spend here and listen to the many languages of the country, it seems that Luxembourgish might prove to be more respected, if not exactly in wider use.

Many a harsh comment on my TikTok's (eds note: Emma is also giving us a hand with our TikTok) making fun of my accent (deservedly so) typically lead to the question "but when will you begin learning the language here?" I usually respond with "I will be taking French courses soon," but then I am scoffed at. “Luxembourgish is the language of our country," one commenter shamed me.

Which, of course, is absolutely correct, however it doesn't appear that way to the unknowing eye.

All the traffic signs are in French, the official law of court is French (although debated in Luxembourgish), and two of the three countries we neighbor speak French as an official language.

In fact, at the grocery store just the other day, I watched on as a cashier asked a teenager to speak French when they attempted the exchange in Luxembourgish. She then spoke perfect English to me upon my turn.

A few weeks ago I met a recent transplant to Luxembourg at a networking event, who was beginning an intensive course for six weeks: every day, for four hours a day, in Luxembourgish. He begins at INL this fall. When I asked him why he wanted to learn Luxembourgish, rather than German or French, he stated that to him, it was the most respectful thing to do when moving here.

Talk about a punch to the gut. I felt like that should've sealed the deal for me: I should learn Luxembourgish.

On the other hand, with no background in either French or German, would it be a waste to jump right into Luxembourgish with no other base of knowledge to go off of? Would the instructors expect me to know how to speak one of the other languages?

Would they laugh at me, like most do, when I attempt to say even the simplest word, like “Kirchberg”?

Is it worth it for me to learn such a localized and mostly unused language, even within its own borders? Or do I opt for the language that is the official language of 29 countries and spoken by so many more?

Or do I say to hell with it all, everyone speaks English here and it's not necessary for me to even try to learn any language at all? For now, I will start with some basic French courses and rely on the ever-powerful "Parlez-vous Anglais?"