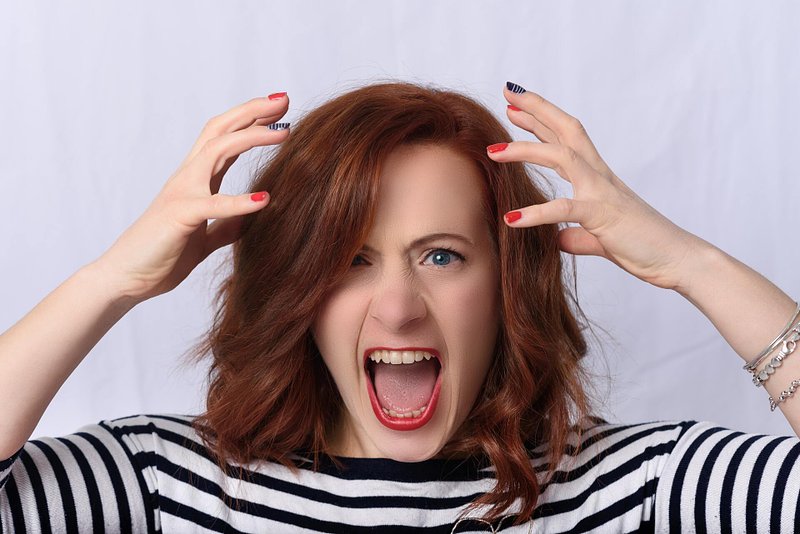 Charlotte de Vreeze-Nauta finds herself infuriated by the online advice for getting one's anger under control.

The house I grew up in had a nice garden where my brothers and I could play and pretty much do whatever we liked. There was one rule though: never ever come near a patch of daisies that my mother had planted.

Once though, when I was about two, my mother was angry with me about something and gave me a smack on my diapered behind. I was enraged by it, and I needed to vent my anger. As luck had it, I was standing in front of the daisies, so I defiantly looked my mother in the eyes, spread my little arms and let myself fall backwards onto her precious flower bed and crushed them all…

My mother thought she had birthed the devil.

One might say that I was only a child and still had to learn how to deal with emotions, especially anger. Unfortunately, I am now 45 and only slightly better adjusted. The short temper - or what I rather refer to as my passionate character – is a part of who I am, and I just have to accept it, as my friends and family must do as well. Right?

Wrong. Because anger doesn’t get you anywhere.

In the past, it has cost me a job. It has also cost me a spot in the women’s eight in which I rowed. My husband and I have a very solid and loving relationship but if there were ever any risk or potential dealbreaker, it would be my volatility.

There is an upside to it. I am super enthusiastic, more than most. And that can be contagious. Also, I deeply enjoy the good things in life so much more than other, let’s say, more well-balanced people. I can get mountain high, and I love that side of me.

Unfortunately, the river deep downside is rather ugly. So, my whole life, this has been my number one1 challenge: to learn to better deal with the angry outbursts.

Especially as a mom it is unacceptable. Apart from the fact that it is not very pleasant for my kids, it also doesn’t set the right example. ‘Look kids, if you get angry, just kick in the door or throw a plate against the wall. It will alleviate stress and make you feel so much better.’ Right…

But here’s the problem. The solutions that I found online are totally useless. I have a distinct feeling that most advice on anger management is written by pseudo-therapists who are not short-tempered themselves and are therefore absolutely clueless when it comes to helping a passionate person to stop losing their shit.

Before I get into some of the most frequent advice on ‘anger management’, let me just quickly address a few things that get me riled up: sure, there is the usual stuff like nagging kids and bad driving. But it is my own impatience I struggle with most. I was at the back of the line when patience was handed out, so I received none. This is the main contributor to my state of mind when I am angry.

So, back to the online help.

First up: Recognize the symptoms. This wonderful piece of advice is often mentioned as the first step in managing a short temper.

However. In many online sources of ‘help’, it also states that anger episodes generally come on with little to no warning. This is true, I know all about it. So, having no warning whatsoever, basically negates the whole ‘recognizing the symptoms’. Strike that advice.

Next. Do a workout. The advice online says that when you feel the heat rising and your heartbeat quicken, stop what you’re doing and move your body.

So, picture this. I quickly want to change the light bulb before it gets dark. It is late, I am tired, but I like to get things done so I think I can quickly squeeze this in. It turns out that the whole fixture is broken, I need to drill holes to fix it, but for drilling I need electricity. Problem is the electricity is turned off so that I don't electrocute myself while simply changing the lightbulb. Forget simply. This one-minute activity is taking an hour and I cannot finish it because now it's dark. Got the picture?

With that picture in mind, do you really think that cardio is what I want to be doing at that point? A couple of jumping jacks when I am exhausted and just want to be in bed, with a nice light for some reading? Which a-hole therapist thought this was a good idea? Apart from the fact that it is the last thing on my mind to run a 20 K late at night, it is even farther from my mind when I’m angry.

This is a nice one: Take a cold shower.  Apparently, a study from 2010 showed that immersion in cold water redirects stress from whatever’s causing anger to whatever’s creating the cold. Okay, this might work. I can see myself, albeit ridiculous, in a cold shower to blow off my steam.

Problem. It is late. I have no light. I am tired. I am angry and not seeing straight. Do you honestly think that an angry person, in order to cool off, just steps into the shower (still dressed of course, because if you are calm enough to take off your clothes, you don’t need the shower in the first place)? No way. Angry people do not think. They have lost their ability to stay rational, so making decisions on how to deal with the anger, has at that point become a mission impossible.

Finally, the most common piece of advice on this topic: Breathe. According to all these ‘professionals’, if you can recognize your triggers, you may be able to breathe yourself into a state of calm.

First of all, this brings us back to the idiotic piece of advice that negated itself: highly inflammable people will not, during a fit, recognize their own image in the mirror, let alone their triggers.

Secondly, it requires some form of cerebral activity: ‘Oh, I am angry. I need to do something about it. Maybe if I breathe slowly, I can breathe myself into a state of calm’. As I said before, angry people are way beyond thinking clearly so there is no self-regulating system at work. It is a total shut-down of the brain.

Believe me, I am keen to work on myself. But please give me solid advice. Because everything I have found so far on anger management is ridiculous. And simply infuriating.