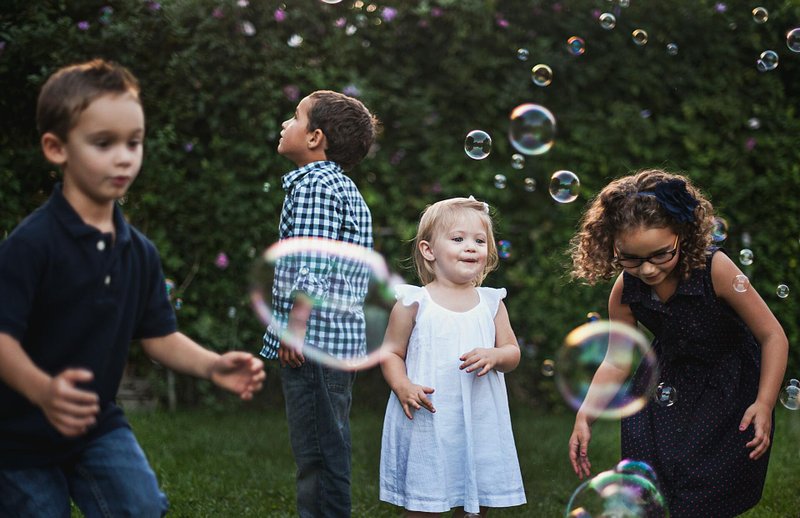 When I was growing up, we knew everyone in the street. All the kids would play together and basically hop from house to house.

And all the parents were ‘aunts and uncles’. When someone fell and was hurt, we’d run to 'aunt' Anne. She baked the best cookies and all of us would profit from this as not only the ‘patient' got a nice treat but all of us. In case we were thirsty, we would go to an elderly and widowed man, 'uncle' Robert. He loved the bustle from all the kids so he would make delicious lemonade especially, hoping that we would come by. If our own parents weren’t witness to some shit we pulled, there was always one ‘aunt’ or ‘uncle' who would reprimand us. Oh, in case you are wondering? No, I did not grow up in the 50s.

I am only in my forties, but this is how it was. The caring of other parents was normal for us and our parents. It wasn’t seen as unwanted meddling, because they were helping each other out.

I am lucky enough to be living in a street, that still has a little bit of that old-fashioned style to it. We know all our neighbours. And even though everyone appreciates their own privacy, we do look out for each other and each other’s kids. It’s pretty great.

But I have the feeling that it is more and more of a rarity.

Kids need to learn everything. Boundaries, limits, how to deal with a gazillion different situations, I mean, the list is endless. The thing is, not one person has all the answers. So, we should be happy and grateful if a friend or a neighbour has a better explanation about something or a more relevant experience to draw from. Please, add to our knowledge and that of our kids.

Plus, repetition is key for kids in order to learn, to make information stick. But if they only hear the same message from their parents, well, it pretty much kills the atmosphere. Our kids discovered eye rolling at a shockingly young age, and back talk came a lot sooner than we were prepared for it too. So, hearing the same message from a different person, is effective. Refreshing even. Plus, it gives you a breather from constantly repeating yourself.

Ergo, I am a firm believer of the credo: 'it takes a village to raise a kid'.

However, from what I hear, I have the feeling that I am a part of a species close to being extinct.

So many parents nowadays are overly sensitive when it comes to the fruit of their loins, and do not appreciate anyone saying anything. This oversensitivity seems to make it impossible for sincere care for another person’s child as it is instantly regarded as 'unsolicited meddling’.

'Aunt Anne’ with the delicious cookies had become a weird lady who probably baked the cookies three months ago and is just trying to get rid of the not-so-delicious-anymore-batch and ‘Uncle Robert’, well, he is just a dirty old perv so keep your kids away from him.

Ridiculous, of course, but as the world has become so much smaller in terms of information, we are overloaded with bad news. It makes the world, and human beings, seem far nastier than they really are. Don’t take my word for it, read the book ‘Factfulness’, by Hans Rosling if you don’t believe me. Fact is that most people are just very nice.

So, whether it is the lack of 'factfulness', or the oversensitivity or both or whatever else may play a role here: when it comes to raising children, you are pretty much on your own nowadays.

Normal parents and all these ‘uncles' and ‘aunts' from the past would simply talk, in case a problem arose. Sit down and have an adult conversation with each other.

But I have recently heard of cases where this was not only impossible, but the attempt at a conversation was met with being fully ignored, physically attacked or even threatened with a lawsuit.

One set of parents refused to respond in any way to the fact (very important word here; fact) that their son had bullied a boy for the better part of two years and kicked the sh*t out of him on a weekly basis. They were in complete denial even though the school was very aware and had even invited the parents of both boys to come in and talk about it. The parents of the aggressor didn’t even show up. They simply closed their eyes and ears to the fact that their son was a big bully.

By the way, in this specific case, I fear the parents may have pushed the idea of 'positive stimulation' to the max (and far beyond). They would not only praise the good behaviour of their ‘big hero’ but would applaud every f*cking thing he did. ‘Oh my god, honey, you are such an angel. You swallowed your food.’ Or: 'Oh wow, it’s your tenth birthday and you put on your socks by yourself. You are such an amazing boy.’ I mean, WTF…? And not surprising, the word ‘no' was never used. Because it wasn’t a positive word…

However bad that may be, at least these parents thought they were doing a good job by sticking to this über positive way of upbringing. Massively stupid, yes. But at least there was a thought behind it.

In a case I heard last week, there was no philosophy on raising kids. It was simply anger and lack of firmness. And unfortunately, probably lack of care. A woman threw her phone at a father’s head because he had 'deigned' to calmly ask her why her son had kicked the bejezus out of his boy. She didn’t give talking a chance, it was instant aggression.

Or how about the hot-shot lawyer who was screaming at a teacher for the simple reason of having been called to school. The hot-shot lawyer’s son was the topic of the meeting as he was bullying and beating up his classmates. But Mr. hot-shot lawyer didn’t care about that. He felt personally attacked by the teacher and threatened to sue her.

Many parents simply have a solid block of concrete blurring their vision when it comes to their kids. And we seem to be living in a time in which ‘everybody should be free to do anything they like’ and not be hindered by any limitations and restrictions, or even common courtesy. Mind your own f*cking business, is the going credo. And that doesn’t combine well with ‘it takes a village to raise a kid’.

It is sad. For the parents because it is such a warm and fuzzy feeling when you know that your neighbours are keeping an eye on your kids. But for children especially. Because they need more examples than just their parents to find their way in life.