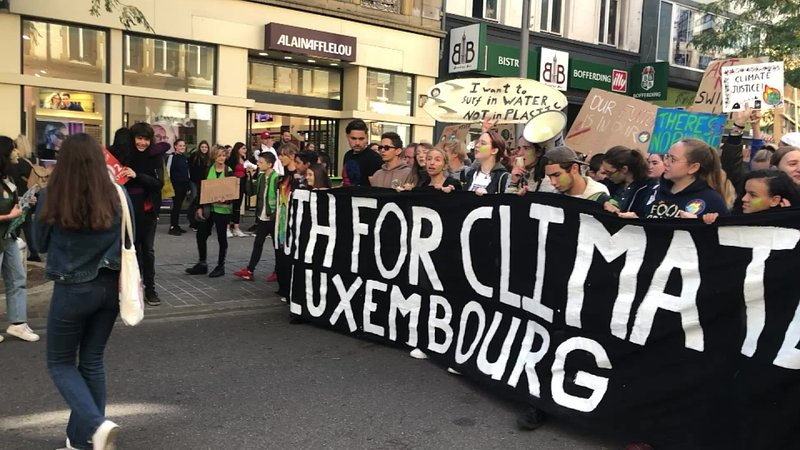 Around the world, and in Luxembourg too, our youth is worried about the consequences of climate change, chanting “System Change, not Climate Change."

We heard just that in Place de Clairefontaine on Friday during the Youth for Climate protests.

Threats to our way of life are no longer far away into a long distant future -- but are very real, and have already arrived, from floods, melting glaciers, and wildfires, to the destruction of vital ecosystems that directly support our existence. The Climate Crisis is both an environmental and social catastrophe waiting to happen.

We can prevent both, by leading by example and with determination on climate change. We can restore faith in our institutions and the democratic process by having them lead the transition to a sustainable, circular way of life. Give back hope to our fellow citizens and the promise of a future.

Inspired by the rigorous work of the young women leading the preparation of last Friday’s Climate protest, and equipped with my own fears and hope for the future, as well as contributions from friends and followers on social media, I headed to Strasbourg last week to participate in the final leg of a series of roundtables held as part of the Conference on the future of Europe, a citizen-led series of debates and discussions that have enabled people from across Europe to share their ideas and help shape our common future.

I was happy to support various motions brought forward by other European citizens and primarily the promotion of a circular economy, the transition to renewable energy, and ensuring the opportunities to come are open and inclusive of everyone.

But ultimately, changes have to happen at multiple scales. And that’s why we need to start considering our own actions and reactions at the local level, in our communes and our cities.

In Luxembourg, there’s a lot more we can do, to work towards a sustainable, carbon-negative future: the ways in which we build our country and our city forward have never been more important. We also need to move forward with honesty and admit the solutions are not the “overnight” type, that there is no magic green wand to fix everything magically. We won’t ‘Deus Ex Machina’ this one.

One thing is certain, we owe it to ourselves and our children and our childrens’ children, to guarantee that they too can believe in tomorrow. I hope we are in agreement.

---
About the author: Christos Floros is a first-generation contemporary Luxembourger. He studied architecture with a focus on the socio-political and urban expansion of Luxembourg and its financial sector. He lives in Kirchberg, where you can often find him playing fetch with his dog.