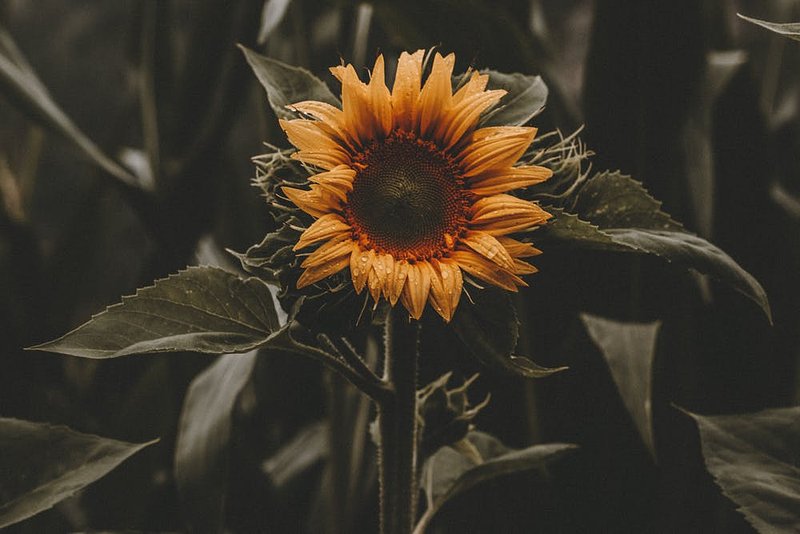 Sunflower started the day as most sunflowers do. Shoulders slumped and head bowed. Waiting for the light and the warming rays to herald the arrival of a brand new day.

The Sun would peek above the treeline in a few minutes. The shadows would be chased away. Forced back into the corners. Hidden. Waiting. Hording their secrets in the dark.

It would be over soon. The involuntary turning. The required reading.

The same flipping docu-soap on repeat.

The romance with the Sun would fade just as quickly as it had begun. Maybe in a note, or by text...a subtle defriending.

Sunflower tutted, shrugged whatever you would indicate were shoulders...or had that simply been the breeze wafting her about her earthly tether?

Heliotropism. That's what the boffins had labelled it. And then, as if by having written down made it fact, the thought became common place and taught in schools.

But do sunflowers always face the sun?

The short answer is “no, they do not."

Now, why and when sunflowers participate in heliotropism is the better question. What's it all for?

To understand the 24-hour internal clock better, one that sunflowers share with many other organisms, including humans.

Only younger flowers “move” to face the Sun throughout the day. Once they reach maturity, they stop sun-tracking, their blooms forever turned eastward.

What an indication of an ageist world! One day you can see it all and the next your view is restricted to the same pictorial scene until the day you wither and die.

Sunflower's slow panorama took in the house to the right. It was just before 7am.

This meant flatulence, coughing, barking. An alarm clock. Swearing. A window opening and a smoke belch. Harrington lived at 26B.

He was an overweight, unshaven lump. His wife had left him just over a year ago. Run off with a chartered surveyor and a BMW.

Harrington and his wife had been looking at a new house, in a new place. The new beginning hampered by the person who was set to help the restart.

Since then, Harrington - already less than a prime cut of man steak - had really let himself go.

His morning routine was the Monty Python equivalent of a Rooster's call.

7.02am. The blue tits had gotten up late. Their songs began to fill the empty air. Wings fluttered softly as they dashed and darted, catching flies, grubs and creepy crawlies.

7.03am. The bleep bleep of Davenport's garage opening and a Lycra clad woman spilling out.

Davenport breathed far too heavy and when she exerted herself she sounded like a broken steam train.

Sunflower chuckled, Ms. Davenport sounded like a steamboat when she had 'company'.

7.05am. Curtains flutter at the Hoffman's. Claude was sure to be on a few watch lists. He himself being a watcher.

He never missed Jacinda huffing and puffing passed his window. Not once in three months had he failed to sneak a peak.

Jacinda knew it too. Was an odd feeling...she was repulsed by him. He was way too familiar. Knew far too much about her daily business.

But still, she was happy that someone was paying attention.

7.08am. The cat from up the lane sauntered into view. Took a long look at Sunflower. Before catching sight of a reckless shrew.

And with shoulders slunk, bum wiggling in the air, like some antiquated wind-up toy, she was off to chase some fur.

7.09am. The corpse of a fast food bag blew passed in the trails of wind. The slow roll and the ungainly waft toppling and tumbling its way to a hedgerow somewhere down toward the babbling brook.

Sunflower took in all the sights and sounds. The sun was ready to make an entrance.