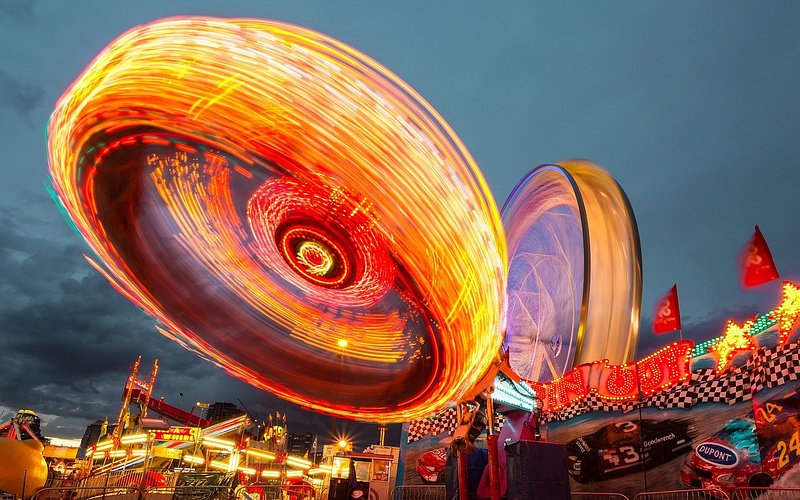 The music was really loud.

Deafening almost. There would normally be an audience here.
Rows and rows of people sitting elbow to elbow but modern day movements had been restricted.

It meant the canned laughter and the Hype Man had to be 'piped in'.

The host's face was exceptionally orange. A brand new shade of Donald.

But he was off camera, too important to be in close
proximity to the 'normals'.

The host, that is, not Donald.

The PA cranked up again, "TONIGHT, on WEATHER OF FORTUNE!", the music boomed out again. It was a hack job of a well known theme song, the type that you have stuck in your head for days, but can never remember the name...

Tip of the tongue.

Tip of the iceberg.

The song was not identical, not at all, it was like some lab bought baby twin. The same only different somehow.

Presumably the tiny changes were an effort to avoid having to pay licensing fees. This show was going out to millions, after all.

Esme knew what she needed to do. The First Assistant Director had told her what was required, many, many times. Esme chuckled remembering the name tag; 'First Ass. Dir. Reynolds'.

Esme knew to look all shocked and surprised, despite the fact she was the ONLY contestant there. The others had to wait in individual rooms and it would be edited to look like they were taking part at the same time.

Despite this, Esme prayed she would not fall down the stairs. She hoped beyond hope that the camera was not adding any of those mythical pounds.

"Esme Hoffmann is 32 years old, she is...or was until recently, a chartered accountant from Grosbous, Luxembourg...TONIGHT, LAAAYYYDDDEEEESSS and GENERALMEN, Esme is playing to be your WEATHER SELECTOR, JOIN us after THESE COMMERCIALS as Esme takes part in the first elimination round!"

Esme had received the letter in the post just three days prior. It arrived not long after the Voucher and the Invite.

She'd heard about the possibility some time before and it had generated quite a bit of buzz on the 'Net wires...until, of course, Kim Kash had displayed a brand new set of 'cheeks.

Still, Esme was part of a cast of thousands, although today it was here, First Ass, Second Ass and the cameraman. The host was still in his booth, too valuable to be breathing in the same air as the plebs.

Esme was the fourth contestant today. Her selection would deign what conditions the folk of Luxembourg would experience for the next 24 hours. Such was the nature of the country's population, that she could make her break her life with one spin of this stupid wheel.

Six feet in diameter, the wheel cast a shadow across the room - even with all the lights shining bright and burning away heaps of positively charged electrons.

Esme did as she had been asked. A gentle skip down the stairs neither too fast nor too slow.

She was to wave at the camera at stage right.

She was to walk briskly toward the wheel.

She should smile...maybe bite her lip coquettishly (she had bristled at this suggestion) and then speed up as she approached.

All the while applause was pumped in over the speakers, as a hundred prerecorded claps of fake recognition soundtracked her 25m pilgrimage.

Esme grasped the handle of the wheel was was surprised at the weight of the wheel and the resistance of the axle.

First Ass shouted "..a PAUSE, ESME, PAUSE!!!, PAUSE...and SPIN!" That was her cue and she spun with all her might.

The Fake audience "ooohhh-ed and ahhh-ed", as the rungs clicked clacked against the the rubber stopper at the top of the wheel.

Rain, fog, cloud, snow, frost, sun, drizzle, heatwave, ice, hail, mist, overcast all the words and symbols blurred into nothing and everything.

"ESME from Grosbous, ladies and gentleman has selected your WEATHER as...."

And then the lights went out....