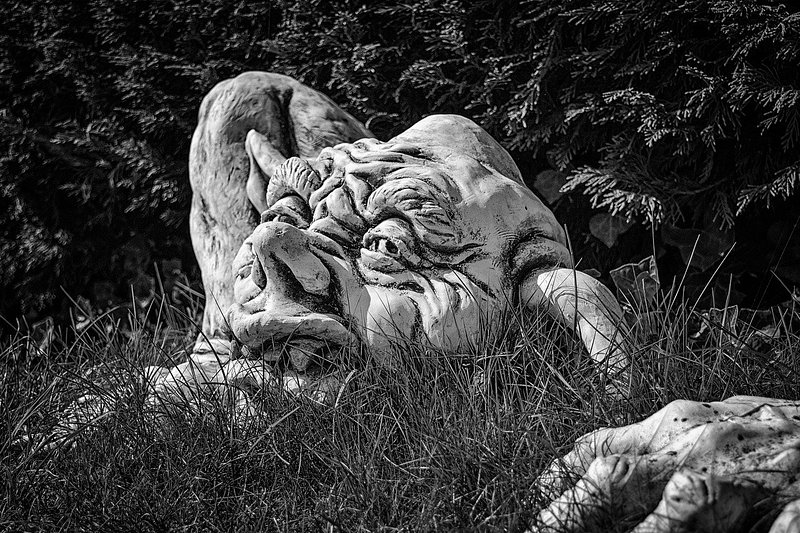 A half dozen screens shone blue in the dim morning light. The atmosphere outside very close to that inside.

This had been a good haul. Troll was pleased with himself. He'd reeled a few in.

The blinds were shut tight. The patter of rain echoed across the bare room. The percussion blending with the click clacking of the keys.

Or was that constipated?

The troll had not been to the toilet in at least a day. Hunched over the keys and pads, Troll had been wedged here everyday since...well forever.

The bridge under which he had once lived had been demolished and was now a luxury set of flats, too expensive for his meager means.

Troll had had a job once.

He was the Goat Gatekeeper at a local farm but once the goats had begun to go missing, the suspicion fell on him. You cannot shake a bad reputation after all.

Butt hurt and miserable, Troll had slunk off to his new dwelling...a studio where the wall paper curled and the damp patches made modern art look drab and he took to a new way of fulfilling his existence.

The trolls eyes hurt. He could not remember the last time he had blinked.

Doing so was like dragging cotton wool over sandpaper.

There was a fine alchemy to doing this. Go in too strong and people would ignore you. Too passive and the same would happen.

Or worse, you'd meet another digital dweller and you'd be caught in an never-ending game of one-upsmanship from which no one ever truly took the spoils of victory.

Troll surveyed his room. It was littered with wrappers from takeaways (ordered online and always reviewed shittily), it was not a nice sight. It looked as if a garbage truck had crashed right through his front door.

The dopamine levels were flagging and the taurine drinks were no longer doing anything other than speeding him to an earlier grave.

His responses and interactions were dropping.

The angry emojis were more and more spaced out.

People were switching to a weather report. They were actually reading this stuff and it made him madder than hell. Why would they do this?

The weather was for people who needed to know about the weather.

He booted up two more accounts and started typing in CAPS LOCK. Began firing off a volley of abuse.

He misspelled words regularly. It didn't bother him. A happy accident. Bad spelling and poor grammar often wound people up more than his original posts.

So he let the squiggly red lines stay.

He felt the heat rise in his sizable gut. The butterflies of adrenaline were turning into dragons of hate.

He could not let this go.

How dare he have to read something he did not like.

If that were the case, he was going to upset some other folk too.

Waste their days...or minutes with some nebbish debate. One in which, even if he were wrong (which he NEVER was) he was not going to walk away (close the tab)...

He loved dangling people by a thread. Manipulating their feelings through key strokes and SEO...or was it SOE...he never knew.

He drew energy from the fact that he could whip up a frenzy simply by dropping a stupid comment on a thread where others had tried to debate properly or had foolishly looked for a few moments entertainment.

Troll had been doing this for months now.

His friends had stopped calling. His lists were decreasing. His walls were covered in Post-Its of accounts.

He went back to the screen, the weather report.

It was doing his head in.

It didn't even say what the frikkin weather was going to be like.

The troll was lost for words.

If an online post is never read, does it even exist?