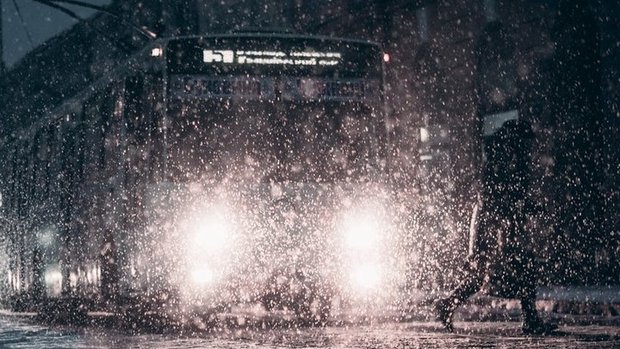 He looked in the big circular mirror.

'F this' he thought.

It was Monday. His shift rotation was slap bang in the middle of a six day, no breaks - all you can manage sh*t buffet... Having worked a 'late' on Sunday, he was already back on an 'early' today.

And his mood was far from chipper.

First the city outskirts. Then the school run. Then the centre.

Ever increasing disgust and disdain.

Free public transport, what a joke!

Some of the very few perks of this job revolved around congestion. He loved that folk were going to be late. He loved blocking lanes. He simply adored not indicating. Or rather, he lived for those moments when a car almost overtook him at a bus stop and he then signalled and pulled out.

Like livestock on the way to the slaughterhouse, these sweaty pigs in expensive goose down blankets were on the way to market and were going to go 'Mimimimimimi'' aallll the way home.

Or maybe not, if the lines and routes were cancelled/altered.

He could but hope.

It was morning. Droopy-eyed caffeine hunting commuters were the first foot-fallers. Those and bedraggled Sunday nighters.

No one paid for a ticket anymore. So rarely was anyone near the cab.

He could be invisible for all intents and purposes.

Maybe he was. If a tree falls and all that...

The engine idled. The doors hissed and whistled.

He had a few moments before the itinerary mandated that he move on. He checked the side mirror and he felt fuzzy.

He saw her running. Saw her arms gesticulating like a Pelican misjudging a water landing, like a Gibbon playing tag.

She was close enough for him to see the panic etched on her face, the perspiration beading on her Botox-ed brow.

He'd give it a few seconds more.

Allow her heart to lift before slamming it to the ground and stamping it into the dirt.

She was almost in touching distance of the circle of lights.

She was but a whisper away.

One final rebellion. One last FU to the public.

He chuckled and slipped into Drive.

The bus pulled away from the curb and chugged a full 5 metres into the barely moving convoy.

Leaving behind it a dirty cloud of diesel fumes. His was one of the final busses to be swapped out for the more eco-friendly varieties.

The woman, who had missed the bus by the merest of inches was now incandescent with rage.

She stood on the pavement able to see the driver's malevolence and unable to do anything about it. The dozen or so work-zoms were slowly turning their heads from glowing screens, glowing ends, misting devices.

She responded in the only way she knew how.

From her elbow to her finger tips, she extended the full extent of her displeasure. Her middle finger raised in the fullest display she could muster.

She wasn't proud. All around she felt the stares burning into her soul. But the feeling welled and grew, like a geyser.

She had had times likes this before, of course. As a youth, as someone who cared a lot less. As someone who was not desperately trying to keep up appearances.

The rage shuddered and shook in her midriff, building slowly upward, she was unable to control this now.

What will be, will be.

Even she had to admit that this was louder than she had expected.

Spooked birds flew from the trees.

A dog jumped and yelped, pulling at its lead.

Roadworkers even stopped and shot admiring glances at this ripe riposte. Such was the conviction with which it was delivered.

A cyclist busy with his average speed collided with a pedestrian rubber-necking the commotion.

The woman matched his pace, step for step. This was a long and not very winding road.

He looked to his right, she was there. Slow and measured.

The eyes blazing with hate.

She grimaced. Plodded on.

Free transport! What a joke.

Today's weather is a bit like asking your partner what they want to eat. It just doesn't know what it wants.