Cryptocurrencies continue to take the world by storm and revolutionise the field of financial technology.

More major corporations are either beginning to accept the use of cryptocurrencies or even utilize the blockchain technology behind them. At the International School of Luxembourg (ISL), us students from the ISL Cryptocurrency Club have some very exciting news to share. We have successfully released the ISLcoin, the first school-based cryptocurrency of its kind.

Over the 2017/2018 school year, the Club did research on various cryptocurrencies, such as Bitcoin and Ethereum, and the blockchain technology behind them. After having listened to various guest speakers who are knowledgeable in the field of cryptocurrencies, the idea of creating our own cryptocurrency within our school, the ISLcoin, was born.

During the 2018/2019 school year, we have successfully developed and launched the ISLcoin. Through the assistance, guidance and support of Dr. James Mulli, the Club supervisor, we have been able to achieve such a milestone. The process of successfully launching the ISLcoin was a significant undertaking, which required many hours of coding, developing and testing.

The ISLcoin is an ERC20 token, a cryptocurrency based on the Ethereum blockchain. It is designed to be used by students and staff members within the ISL community. Unlike other cryptocurrencies, the ISLcoin is considered as a “Stablecoin”, where the value of each ISLcoin does not fluctuate due to changes in demand and use of the ISLcoin. This results in price stability and the ability for users to invest into the ISLcoin without the risk of losing value.

As of this writing, the ISLcoin allows both ISL students and staff members to purchase goods offered by the ISL Business Club. However, with further development and integration into the other clubs and groups within the school, the ISLcoin will enable students and staff members to make purchases quickly and securely at various school-based events. There are several other potential applications of the ISLcoin which will be developed in cooperation with several businesses that have already expressed interest in the activities of the Club.

The next steps for the ISL Cryptocurrency Club will be to manage and maintain the ISLcoin during the current school-year and to build on the knowledge that we have gained so far. We are looking to increase adoption across various other school clubs and events. The Club is also looking into developing a school-based blockchain system and a new voting system based on smart contracts.

Cryptocurrencies and the blockchain technology are still relatively new and their full impacts and effects on the global economy are yet to be seen. However, us student members of the ISL Cryptocurrency Club have managed to develop and apply our knowledge and understanding to launch the first fully-functional school-based cryptocurrency of its kind. It is truly an exciting time in history, where digital transactions and the Internet as we know it are being revolutionized, and it is amazing that us students at the ISL are given such an opportunity to be part of this revolution.

Antonio del Rio is the Student Leader of the Cryptocurrency Club of the International School of Luxembourg. 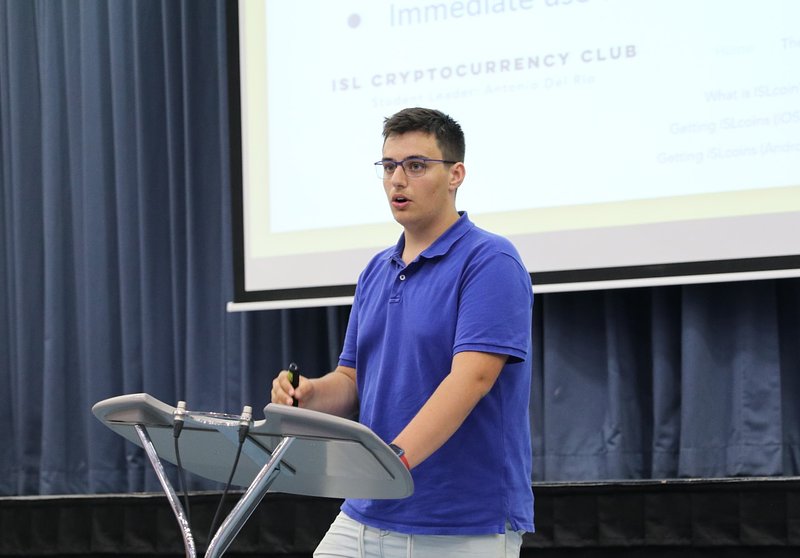