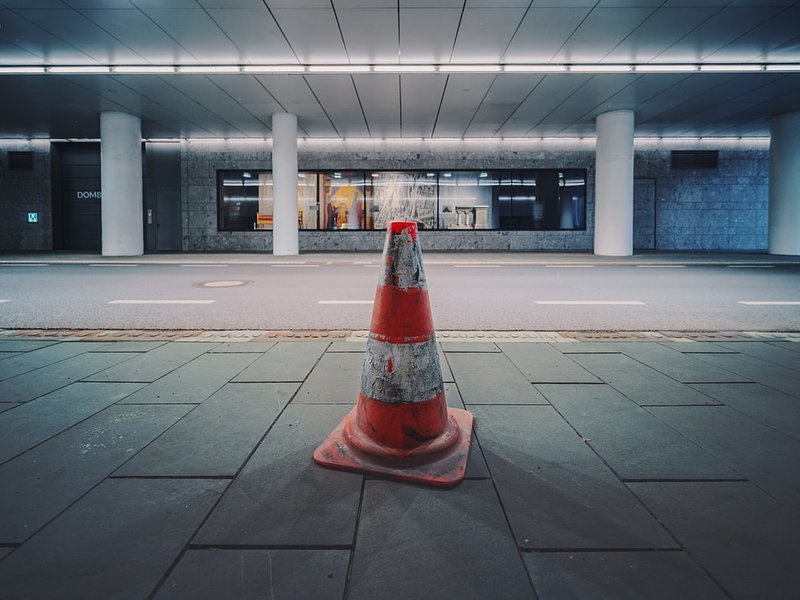 His fringe was slashing against his forehead – a veritable cat o nine tails, raining dogs too and the wind was stinging his cheeks.

The folk in their SUV’s, pumpkin spiced and with a zest for life, ghostly apparitions they were, as they drifted by, sometimes at speed, sometimes at a crawl. The outside world reflected in distorted images across their fuel guzzling cocoons.

The December pallete was neon and was already so very last year. The city planners had suggested a major resurfacing of three major inlets. It meant chaos was coming. It meant rush hour jams. It would lead to splenetic outbursts. Spittle and swear words.

It would lead to firing and hiring and hospital visits and insurance claims.

Exhausts belched as the exhausted skinbags stared resolutely ahead. Stay in lane. Stay on target. Unless your lane is better than mine, then I’m moving to that one.

No mirror, no signal… manoeuvre.

Without the first cone, there would be nothing to slowly siphon the flow of traffic into a controlled lane. Slowed down, malleable. Manageable.

The wind picked up another mish, mash, mush of fast food roadkill. Fox mixed with burger wrappers and badger spliced with a bagel box. Flattened into a reddy-brown pancake.

Cigarettes leapt and darted. Their glowing pirouettes an artful end for the plumes as they dambusted their way to a fizzle on the dampened tarmac.

His crew were motley, unimpressed at the task at hand. Huddled round the back of the truck. The youngest of them, he was the ‘first placer’. His job was to get the first cones out. Swim against the current.

His job was the hardest. You had to brave or stupid. Maybe both.

The morning light was an orangey-blue. Most of the contrasting colours were bleeding across the sky.

The way ink blots and swirls in water.

He stood on the hard shoulder as Colin barked to get on with it. Cones in hand, heavier than you would expect. His legs shook a little. His mouth was dry. The espresso had worn off and now he was on fumes.

The HGV’s rumbled passed. Chassis’ shaking. The Mercs, the beamers, the Audis whizzed passed, these were the lucky ones. Delays were coming.

Dickie, shoved him in his back – “Get a move on you soft prat!”

He wished that with these cones he could gently steer many of these air-wasters of a cliff.

Just gently place the cones a little off grid, the quarry would do.

He could get the signs changed – up the speed, that would please the gullible. SatNav logic be damned, they’d follow the orange and white. Smoking, vaping, swiping, gesticulating.

Racing to the end.

Heart in top gear, brain in neutral he stepped over the white line.

On your marks, get set…