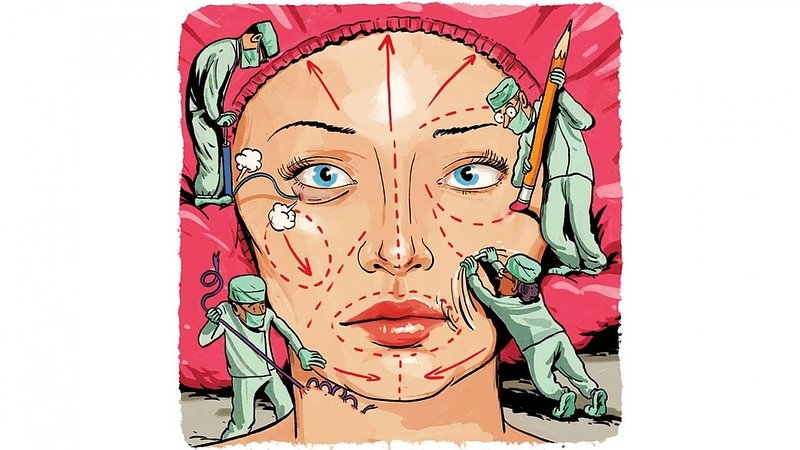 It had become too much.

The perma-drizzle. The fixed frowns. The drowned best intentions. All those pissed on parades.

It was fast becoming overwhelming. Too much information saying the same thing.

Best foot forward and other such pithy phrases.

The surgeon wanted to ram those motivational posters 'where the sun don't shine' but given the recent trend in weather, that could literally mean anywhere.

What if he really could turn those frowns upside down.

It was a sinister thought and, yes, it did take him by surprise from time to time, the ferocity with which he wanted to make a change but all he wanted to see was the whole world happy.

After all, when you smile, the whole world smiles with you.

A nip, a tuck, a little tidying up...it was far from the worst business plan.

He could 'sponsor' blood drives, be a patron of beach clean ups. He could run a soup kitchen.

All of the above.

And as long as he kept the smile on his face, frozen features, a non-stop beacon of happiness, even if on the inside he was screaming.

It would be worth it.

He could me a martyr to self-belief. If you smile when no-one else is around then you really mean it.

Instead of nicotine, caffeine, codeine, lithium, Valium, Oxycontin, dopamine, serotonin, the public could get a blast of nitrous. Happily slipping under the veil of the laughing gas.

Waking up as a different person.

Isn't that what we all wanted anyway? When we go to sleep. Hitting a neural reset of sorts.

The resting of weary heads on ill-fitting pillows, the chance to wake up as a better version of the person you were before.

The surgeon's lips peeled back. He reached for the nitrile gloves.

He grabbed a blister pack of Ambien. He threw some pomade in his hair. Combed his moustache. Fixed his collar. A splash of cologne.

One last look in the mirror before heading to the bar's fluorescent hunting grounds. Where hedonism masked insecurities.

Where fake smiles were worn as a badge of immorality.

Where he'd find what he needed. Easy pickings.

He said to his reflection, "Let us always meet each other with a smile, for the smile is the beginning of love."

And the surgeon drifted into the haze of the ordinary lives and he smiled.

And boy, did he smile.