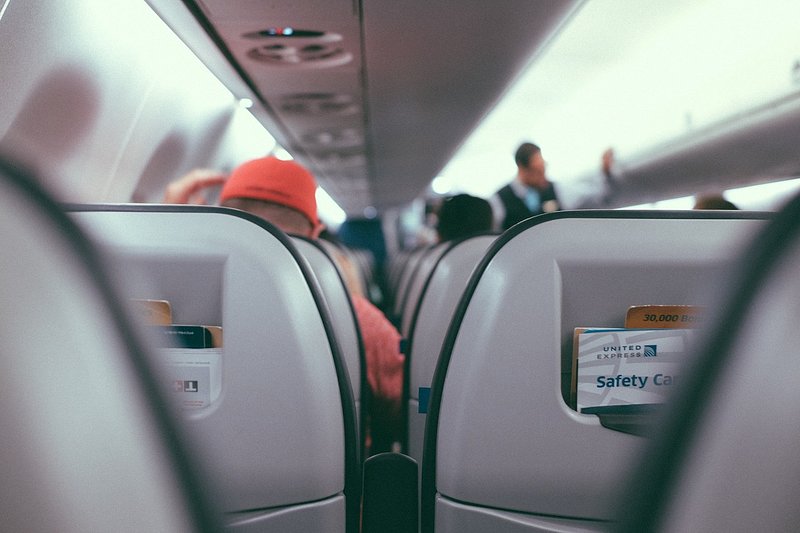 You know who you are, and I hate you with a fury...no one needs their face mere millimetres from a sneezed on headrest.

I have previously stated that there are two types of people in the world: those who empty bins regularly and those that let them overflow.

I described one sub-set as being evil and the others as marginally less evil but capable of evil deeds.

I need to reassess my process now, though, as a once-whispered brand of hell people has pushed its way to the front of my mental queue.

A recent trip to Iceland reminded me of the inherent selfishness that typifies entitled folk.

Now, I am sure that there are many recliners as there are nice, courteous folk, and yes, reclining on long-haul flights is very different to a short city hop.

But they key is in courteous.

It's not ideal being cramped into a tiny seat pitch at the best of times and being of average build but slightly spilling over my once trim jeans, I am not your average contortionist.

I don't have a problem with people wanting more room. Heck, so do I. If not just for me ageing joints but also for those folk around me.

Worse is the sudden fling types. Those that just throw their chair back with nary a care if you've got a hot beverage, overheating laptop, infant child, short fuse...

On a trip to Barcelona, on a stinking hot bus after numerous delays there was a lunk who slammed his chair straight back as soon as cheek touched cloth. He inadvertently struck my young son on the shoulder, knocking him down. I waited a second - one of those that feel like an eternity - for a hint of an apology.

The gent did not so much as turn around. A few jabs on his shoulder got his intention and he asked what my problem was. I explained that perhaps he should be more careful when reclining seats.

Needless to say, we agreed to disagree and I spent the 45 minute journey staring through his skull and wishing I had a toffee hammer to rap repeatedly on his knuckles.

Back to the Iceland trip. We were flying out on a fairly pricey, fairly nice airline. The flight was not full.

A couple of folk, whom you could tell were of a certain ilk, had been remonstrating with air attendants for a full five minutes. They were the last to board, I though perhaps that someone was in their seats...

It was soon apparent that these were the kind who would take umbrage at the pilot having the comfiest space in which to do his/her job.

This pair, who, apparently upset at not being allowed empty first class seats asked if they could be seated in a less crowded row, so that they could stretch out.

Again, not an unreasonable request - and, to be fair, I wish I had had the chutzpah to make a similar request but with a tired family itching to get to sleep/watch Captain Marvel, it was best to let it lie.

Despite there being numerous rows free of littered limbs (it was only a three hour flight), they plumped for the one directly in front of my kids. A had a touch of the Pavlovian response and spent the next 45secs anxiously waiting for the inevitably click and stretch that would signify the seat back shooting toward my kids' noses.

Sure enough, click slam wallop, the seat flew back and sent my kids' books and other such things to the floor.

Again, I can see it makes sense, kids need less space, right, so taking up a few more on the hypotenuse is not gonna cause too much grief.

I guess, it's not why but how these folk went about it. If they had turned around and offered a feint warning that they were to recline, I'd be prepared, and when I say 'I', I mean them, and when I say them, I mean 'I'.

Forget the fact that there were many seats free away from other folk as often times there are not, especially if you fly budget but it's worse in cramped conditions.

On a trip to Florida, a ticketing cock-up meant that I was seated away from my kids, not just one seat but a full five rows.

Obviously an eight-hour flight with then eight and ten year-olds was not gonna cut it. The flight attendants offered to assist and asked if the kindly woman seated by the window would mind moving so that I could be placed with my urchins. The kids not being able to sit alone was of no concern of hers. She, of course, said no and ignored further requests with a waft her hand - she smelled of old scarves.

Fortunately two young french women seated behind had clocked what had gone on and offered to move so that the three of us could sit together. Me and the kids, not me and the French women (I am married).

As we rearranged ourselves clumsily, the grumpy old boot decided to throw her chair back and smack my youngest on the hip. Now, being British, I am used to apologising profusely, even when something is not my fault but on this instance the beast was awoken....that is to say that I muttered some choice swear words (world class ones) and sat down. Ordinarily I would be on the lookout for my kids kicking seats or being noisy but in this scenario, I let them off the leash...I may have even prompted them to be extra restless and didn't ask them too shush.

Old boot face was not having a good time. We hadn't even left the taxiway.

I was once asleep on the foldable tray on a trip back from Morocco when a recliner near snapped my neck in two. I spent the next 120 minutes kicking the bottom of their seat. Every time they shuffled to get comfy, I would start again. My toe hurt, but it was worth it.

Plane rage is a 'thing' and I've keep a lid on mine...for now. Maybe I need therapy. Who knows.

So, let it be said, that while I may begrudgingly respect your choice and (grimace) right to recline your chair. I will suffer the ol' jittery legs and go full Flatley on your seat's backside and what I lack in prowess, I can make up for in enthusiasm and stamina.

---------
Do you have something to get off your chest? Perhaps an observation, question, gripe, or praise? Feel free to drop us a line through audience@rtltoday.lu, or through our Facebook page.