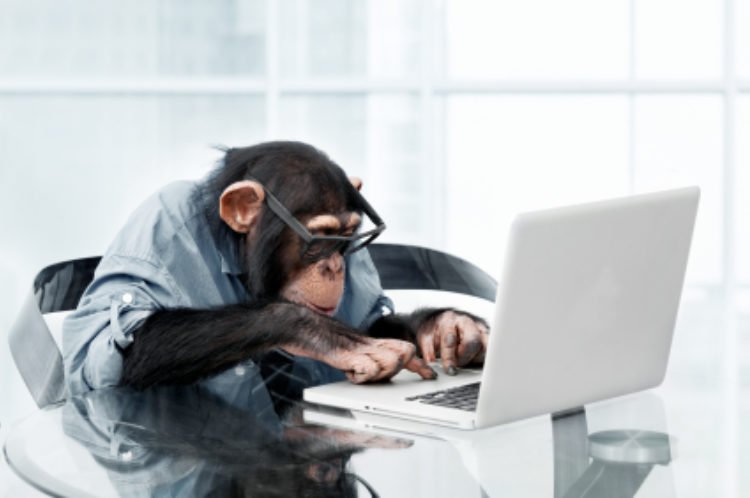 The clacking of fingers on keys was incessant. Row upon row of shoulders hunched, the hangar illuminated by the blue glow of infinite screens.

The theory was that this rabble of primates would be easier to mould. That the work was cost-effective.

Every failure would be one step closer to a real success.

Why not break that mould? Why not do more?

It was only a weather report after all.

Geoffrey was sweating beads. He’d been on this for 12 hours straight. The boss, a hulking thing with a scarred-face but an affected toff-like way of speaking – something employed to elevate social status – had made it clear that if no prose was produced, there would be consequences.

"All unhappy families are alike...."

The last time Geoffrey saw the outside, it had been grey, yet dry. The leafy jungle replaced with a concrete one and then here.

Geoffrey had stalked inside the grimy offices. Filled in the forms. Ticked the relevant boxes.

The walls were mottled with flung faeces, dirty protests writ large but still no winning text had yet been turned in.

If you throw enough shit at the wall some of it will stick….

"In my younger and more vulnerable...."

Not the correct font!

It should be easy, let it flow. Tune into the Zen, dole out the requisite wordage. Headlines, headlines…spin and scandal.

Secret workhorses….but you know, less equus, and more primas and linnæus. Besides, the horses were on security.

This was secret stuff, after all.

Five years this had been going on. Five years of rank and file.

Furious howls were heard in the halls. Many of them had gone mad. Murmuring and muttering, quotes and names. Time lines and finelines.

"If you really want to hear about it..."

If Terrance got there first it would be curtains. If that orangey bastard struck gold, Geoffrey was gonna quit. Go full on 'Planet of The Apes' and start a revolution...

Then the lights went off and a single light shone. Row 569, chair 15. Not Terrance, please not Terrance!

"All of this happened, more or less" (K. Vonnegut.)