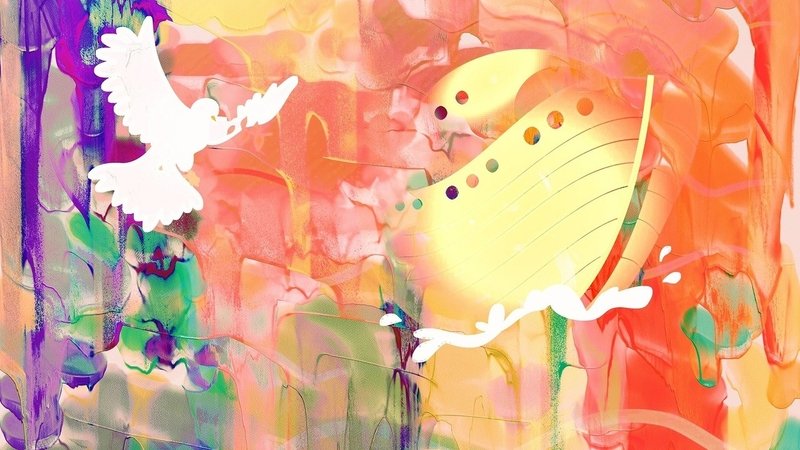 Noah was hungover. Hungover to hell. The room was spinning and so were his guts.

As invisible nails slammed repeatedly into his cranium, Noah got slowly to his feet.

Strangely enough, his hands hurt more than normal and he had callouses that were not a typical lifestyle choice.

His thumb was a bright purple…or was it magenta? Or even mullberry…

His clothes were in tatters.

Noah’s knees were raw and bruised. This was not the result of his having strapped in for a normal 'heavy one‘.

The rain was coming down in sheets. Hammering away on the tin roof. It had been like this for days now.

There was a beardy guy. Looked like a coffeehouse barrister but more shifty. He’d come in the bar. He and Noah had shot some pool, downed some shots.

This chap, Christ, what was his name? This guy was waffling on about unending rains. About animals in pairs.

Anyway this guy, with heaps of Hipsterisms and holier than thou approach, it seems, was all about being a proper Boy scout. 'Be prepared‘ he had said. 'Save them all, save yourself‘.

Messiah complex, or what!

And just as Keyser Soze might have done, when it came to settling the bill, the dude was gone. Typical.

Noah laughed it off and splashed his face with some cold water from the sink.

Outside, aside from the howling wind and the infernal rain, there was some sort of commotion.

Bleating and snarling. Chirping and squawking.

There were glyphs and scribbles all over the chalk board. Hastily drawn plans. He couldn't make out what was what. Work tools were strewn about the gaff. His forearm covered in residue. It looked like his arm had been dragged through a pastel rainbow backwards.

He had at least the sleeve of a Technicolor dream coat.

JOSEPH! That was the guy's name, wasn't it?

Noah flung open the windows and took a look in his garden...or at least what was left of it...

His begonias were trampled. The chrysanthemums were under foot. The roses were no longer standing tall and proud.

The English lawn and it's wonderfully symmetrical stripes was nothing but mush and mud. Under hoof and claw.

A helicopter swooped overhead. The spotlight illuminating here and there, fur and hide, skin and scale.

"Noah, we know you're in there! Come out with your hands up"

In the distance, or the semi-distance, Noah's eyes were yet to focus properly, and, to be fair, this was hardly a normal scenario...in the distance there appeared to be looming a ruddy great ship...

Well, the beginnings of one.

OK, OK, it was hardly a ship. It WAS a vessel of sorts. Two kayaks and a shopping trolley slapped to some MDF and there was a Nexo Knights bedspread attached to what one could only assume to be a mast - in fact a clothes line.

"Noah, last warning...come out with your hands up."

Noah was perplexed. Casting his eyes around the place, he tried to piece together the night before.

Flashbacks. Not in order. Shooting images of fleeting memories. Like Memento, only Leonard had not tried to build a boat in his own back yard...had he? Noah couldn't remember.

God, man, why had he done this? There was a menagerie out front and a soon to be sunk flotation device on a plinth at the end of the drive. The cops were here and still Noah's frikkin' head was frikkin' pounding.

Aghast, Noah made for the door... would he run? It WAS still raining out. How far could he get before they got to him?

"Every year, Noah. Every Autumn you do this...Now out you come and help us clean up this mess."

Noah, shrugged, much like Atlas would and slumped back on to his threadbare sofa.

If they wanted him, they could come and get him.