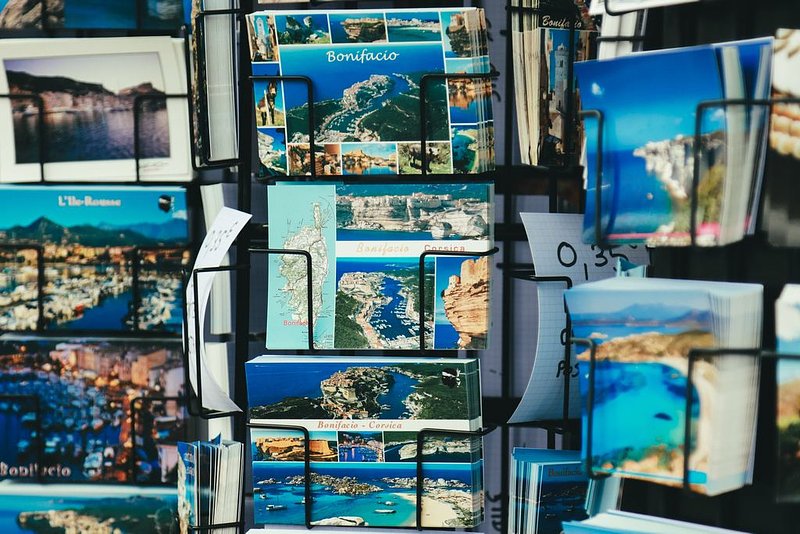 Rows and rows of images from far flung lands. Mostly.

Some, of course, were from a few hours east, west. Up wind, down wind.

Lined up in no particular, order the cards advertised a place that bore little to no resemblance to the, you know, actual surroundings.

Much like meeting people from an internet profile in the modern world, what you saw was most definitely not what you were likely to get.

Yellowing at the edges from a few too many days in direct sunlight and showing the tell tale signs of so many near sales, Postcard was at a loss.

Streaked with old raindrops in the times that the seasonal shop assistant was too late in draping over the plastic weather protection tool* (*shopping bag) over the top of the rack, Postcard looked much older than it was.

Jaded, faded, a relic of a current era. Edges fraying, a crease forming across the middle. Old before its time.

The church tower with the roof restored after the storm of '83.

A once bustling high street, taken before the markets crashed in '94. Hundreds of people. Sticks of rock. Ice Cream, Souvenirs.

The third, a hot air balloon, rather inexplicably, as there had been precisely one hot air balloon over these skies, and there was by accident when the, bigger, more exciting city down the road had one go off course during their centenary celebrations in 2005.

The final images was of a child, happy and smiling, building sandcastles on the beach (the sand had been heavily photoshopped to look more golden than brown).

The shop assistant looked up from her phone, momentarily distracted by a passerby who looked for an instant that they would stop in the shop awning.

But alas no, the call of the corporate coffee cup was too strong and off they trotted to the caffeine den of the typical consumer.

The beach front was deserted. It was a lovely day.

A calming, cooling wind spread across the esplanade and gently rattled the shop window shutters.

This was fine, thought the Postcard, it was a nice view after all.

The irony was not lost, and The Postcard chuckled sadly.