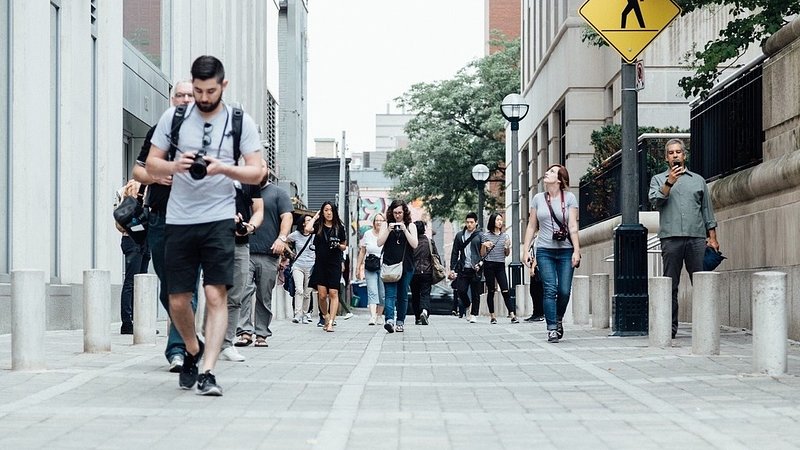 I'm a determined walker, which is to say I usually have a destination in mind. In the obstacle course that is walking slow walkers are the worst.*

*The elderly, injured people, and parents or pregnant people are exempt from my ire, of course.

Where do I start when it comes to slow walkers? The absolute obliviousness to their surroundings? The fact they don't know that other people have places to go? Or their entitlement if you do end up tutting at them.

I live in Edinburgh and come August, the city unleashes hell on its local pedestrians. You want to get to work via the city centre? Good luck pal, for the tourists have arrived and with them comes everything I think tourists should not do.

Really, the issue bottles down to a lack of thought. If you're a slow walker, try and think about other people trying to get around - provided the thought isn't extra work and makes you even slower. Need to scroll on Instagram? Step aside, you buffoon because if one more person bumps into me with their face glued to their phone, I will lose it. Just because you're on the pavement doesn't mean you don't need to be aware of your surroundings. There are wheelchair users, prams, and - more generally - people who have somewhere to be who don't appreciate you dawdling along.

The worst offenders are by far those who insist on walking to three or more in a row. Do you seriously have that much FOMO that you can't separate into groups? And then they have the audacity to glare at me when I have to walk out into the road to overtake them - because of course they're ambling along at a snail's pace! Slow walkers do nothing but frustrate those around them. They just happen to be walking in the middle of the pavement at a pace making it IMPOSSIBLE for you to overtake. Or maybe they're walking slowly in front of the building you need to get into, because of course they have no idea what doors are and what purpose they serve!

The soundtrack for everyone plagued by slow walkers.

And of course, you also have those people who stop abruptly. When I was a child and I was walking down the hill home with my friends, we'd play this game where we'd be running and one of us would stop, making the second person bump into them. Great as a child, less so when you're trying to get to work or the train station.

Sometimes it makes me wonder if we should introduce pavement lanes: one for those who are in a hurry or more generally walk like normal human beings and one for the perennial dawdlers. I'm just tired. I'm tired of having to repeat 'Excuse me', as I try and get past people. I'm tired of others barging into me and not saying sorry. Can we just have some pedestrian etiquette more generally?

I try and understand the psyche of slow walkers, I really do, but I just can't. What possesses you to walk so slowly (again, not counting health impairments, age, pregnancy, or children) and be so unaware of your surroundings?!

And do not get me started on walking silent disco tours!