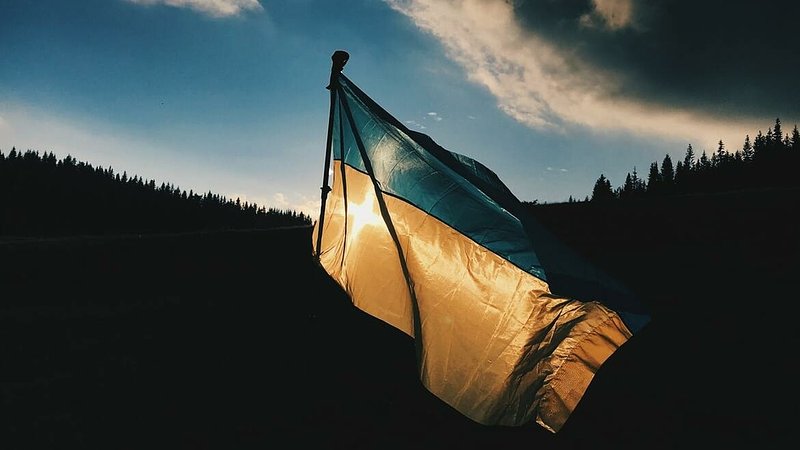 Zhenia Doluda is a Ukranian national currently studying at ISL. In this Young Voices article, she shares her experience following the Russian invasion.

6am – Waking up to an overwhelming number of notifications on my phone. Most of them from the New York Times app along with some unexpected personal messages. Re-reading the same headline does not help me comprehend what had just happened; “Russia Attacks Ukraine”. Immediately, my world is submerged into the news of fighting and shooting, into fear for my loved ones to whom I had spoken to just days prior to this morning. Nothing in my life remained constant as I felt like I was walking through a hazy dream-turned-nightmare. This was my family’s biggest fear, this was Ukraine’s ultimate horror. And we have just begun living it.

The morning is grim, with constant breakthrough stories circulating online. “Putin Announces Start to Military Operation Against Ukraine”. “Scenes from Kharkiv: Battle wreckage, the boom of artillery, and people sheltering in the subway”. My first thought is my grandmother in Kyiv, who turns 70 in a few weeks. My mother is frantic on the phone with her sister, begging her to pack up quickly to flee the city. No one is certain of anything, no one knows if these news are real or another one of Russia’s cyber-attacks. Praying that it’s the latter.

3pm – Updates about Russian convoys keep pouring in, they have infiltrated the northeast region of Kharkiv along with the southern city of Kherson. The capital city in the north, my hometown Kyiv, is under suspicion of being next. Reading about buildings, kindergartens, and hospitals being bombed makes my throat close as my heart sinks. I finally get to understand the literal meaning of these words. All around me I hear the world’s reaction to this, whispers about sanctions, possible financial ties being cut with Russia. I can’t help but wonder how these are going to help Ukrainians being grazed by bullets. After all, I am only a 17-year-old who supposedly doesn’t know the way of diplomacy. But at this point, it already starts looking like bullshit to me.

At some point, Kyiv begins to turn into a warzone. Residential buildings are bombed as the death toll rises. Reading about this in between classes drags my mind far from school. A Russian troop is reported to be roaming the streets 20 minutes away from my aunt’s house. Barely being able to text, I find out my family may need to use their bunker. The thought seems ridiculous to me, but reality sinks in as I keep watching the headlines change for the worst.

9pm – Being away from Ukraine during this crisis makes me feel helpless. I cannot begin to understand how my family and friends are feeling at night and during the day, when they cannot leave their homes let alone feel safe in them. Watching the world’s response to this make me angry. Why can’t they send troops? How come there needs to be a discussion about Russia’s behavior? Isn’t it obvious that this is an intentional invasion? When is Ukraine going to be recognized as a country full of innocent lives instead of a third-world conflict zone? Doing my homework while watching President Biden’s speech seems natural, almost as if I had done it yesterday and the day before. The news of war begin to feel familiar and realizing this saddens me to an unbearable measure.

I go to hug my mother and she starts crying. Without asking her, I know why that is. My family cannot leave Ukraine, not with bullets flying in every direction on the roads. I admire those who take those risks to flee, and hope that someday my family can be among those on the neighboring country’s border, crying because they left their motherland in ruins but also because they have made it out alive. Not being religious or ever having addressed God before, I still pray for every Ukrainian child going through horrors that I was lucky enough to avoid. I pray for the soldiers who never imagined themselves holding a gun last week. I pray for women who watch their sons and husbands leave without knowing if they’ll ever see them again. I pray for cities that I have walked around in the past, never imagining that one day they will be in ruins from the missile attacks. I pray for the country I have left almost ten years ago but still call my home.

After this day, I wonder - why do we only rest in peace? Why can’t we live in peace too?

-----
By Zhania Doluda. I am Ukrainian, but have lived in numerous countries such as Russia, Mexico, United States, and now Luxembourg. Currently attending International School of Luxembourg, studying in Grade 11. My aim is to bring awareness to global issues as well as provide insight on problems often overlooked by today’s society.