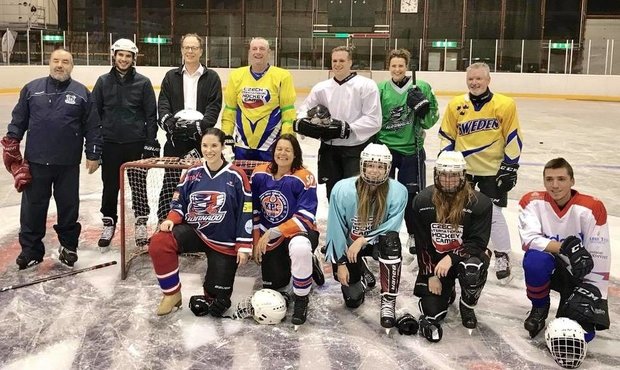 That's me in the white shirt standing in the back row. / © Luxembourg Huskies/Christophe Hernandez

What does it take to convince a confirmed non-sportsman to return to a sport he had abandoned years earlier? Are we sometimes persuaded to reconsider choices we’ve made, because of, for example, a child’s interests? RTL Today editor Mike Gordon had an experience like this and here’s his story.

I would never have described myself as a sporty guy. After playing a few sports in my childhood, as one does, I stayed away from any organised sport. I was always one of the minority of men who wasn’t that interested in watching televised or team sports. Oh, sure I could rouse myself to watch a big game, like a World Cup final or some giant Canada vs. USA or Russia international hockey game (I am Canadian, so that figures). But really playing a sport? Not me. That went on for years. Decades.

Much, much later, my son came along. His ability to eventually get me to change my view on sport wasn't evident right away, especially during his baby phase. Starting around age 4, he started to become more and more sporty. First with football—hey, we’re in Europe. His kindergarten (maternelle) gym teacher described him to me as “athletic”. I wasn’t sure what to make of that. I started to ask myself the question: how can a non-sporty man be a father to a sporty son?

On a trip back to Canada last year he got a crash course in Canadian winter sports from the older son of a university friend. Somehow, out of what was in reality mostly about tobogganing, he decided that he really wanted to play hockey. At that point, he couldn’t skate at all and had never even held a hockey stick.

I knew vaguely that there were hockey clubs in Luxembourg, even junior ones, but I’d never had any occasion to have any connection to them. After all, if you grew up watching the Montréal Canadiens battle the Toronto Maple Leafs or the Boston Bruins at the hallowed hockey arenas of my youth, Luxembourg hockey had just seemed a bit incongruous and small-scale to me.

Everything started during a Luxembourg Olympic Committee-sponsored event introducing kids to various sports held at the Kockelscheuer recreational area. After sampling several sports through all the different exhibits, he was drawn seemingly almost magnetically to an iceless stretch of one of the two rinks where people wearing bits and pieces of Huskies hockey gear gave kids a shot at using a hockey stick and puck. Despite myself, I almost teared up when he gave it a whack (I think he actually missed and had to try again).

The summer went by, with weekly (and sometimes daily, during school breaks) football. He turned 5 years old. Then, in late September, the time came around for the Kockelscheuer rink to re-open. As good Canadians, my wife and I considered getting him to learn how to skate about as important as teaching him to keep his head above water. In inquiring about that, we made contact with people involved in recruiting for the Huskies. We were heartily invited to bring him along to the rink.

The day to go to the rink and try out for the Luxembourg’s Huskies U7 (under 7) team arrived, and we got him all geared up using Huskies’ loaned equipment for his first outing onto the ice. He fell flat on his face. He was soon shown a device to keep him standing.

In the weeks that followed, I started taking him twice a week, Fridays and Saturdays. We took him to the Leudelange location of Citabel, the only sporting goods store in Luxembourg to stock hockey equipment and got him some of his gear. The rest we got second-hand through the Huskies organisation.

Above is a video recently produced by the Huskies during their U7 skating training. The kids are as young as 5 and sometimes 4. My son is in this group.

Twice a weekend, with the help of the Huskies’ volunteer coaches, he became first able to stand on his skates, then he slowly got better and better at gliding. While at first he fell frequently, slowly he spent more time skating and less on the ground. I cannot describe to you just how enormously and somewhat inexplicably proud of him I was at every step of the process.

After having spent so much time in the rink watching my son get his start in Canada’s national sport, with long-forgotten memories of my own childhood hockey experience coming to the surface, I for some reason I couldn’t resist the idea of accepting the offer. After, all the idea of bonding with my son as he got his start in a sport I knew deeply appealed to me.

Encouraged by my wife, I asked whether there was an upper age limit. I found myself googling to find out how old you can be and still play hockey—you can be fairly old, it seems. I’ve heard that playing hockey too intensively can be bad for one’s heart, but that’s for people who are able to move as fast as their 16-year-old selves—not me. Anyway, there was no limit. So, I got ready to lace up for a hockey activity for the first time since I had to be driven to the rink by my mother.

I made my way back out to Citabel again to buy the minimal gear that the Huskies post had specified. The gear I'd once owned, which wouldn't have fit me now anyway, was no more. It cost a mint. Later on, my son looked at me with a mixture of puzzlement, awe and admiration as I showed him my newly purchased hockey equipment.

When the next Monday night came around, I had a surreal sense as I drove the considerable distance from my house to the rink south of the city through the darkness. The sense increased as I entered the secondary rink and saw a grown woman walking about wearing full hockey kit where I'd only ever seen kids doing so. Into the locker-room and then I saw the others who had responded to the call. Some younger women, some younger guys, but thankfully some older women and older men, too. 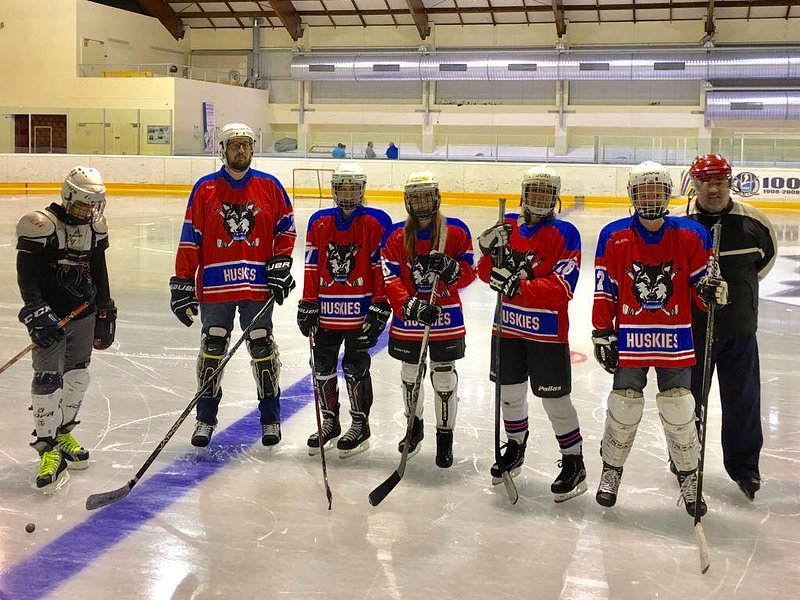 They were the parents, friends and relations of children playing hockey for the Huskies. Apparently when the group got started, there were 3 players, then the next week there were 6. This time there were 11 (nearly enough for two teams!) Some of them had clearly played recently, others it turned out had never even skated before.

I followed the stated equipment requirements, though it seemed to me that everyone was wearing full gear. I busied myself with my skates. When the time came, I went out onto a nearly empty rink for the first time in too long to mention. It seemed much bigger than I remembered. But it was a thrill to be able to pick up speed with no need to slow down to avoid tottering little kids and feel my rhythm starting to come back.

Coach Christophe Hernandez stepped forward and started putting us through some drills. Unfortunately for me, the first two highlighted my inability to do the “hockey stop”, where one stops quickly by digging one’s skates into the ice sideways, when done by professional players often producing spectacular sprays of ice particles. Then we had to spin around through 360 degrees while skating at speed by doing some fancy footwork, something I also had never learned to do.

Then I fell badly while trying to make a fast turn and would have cracked my head open were I not equipped with a certified helmet. I fell a few more times, giving myself aches and pains I can still feel as write this. And of course, I became very warm from the exertion and my plastic visor fogged up. And I had a persistent sense of no longer being as able as I could remember being. 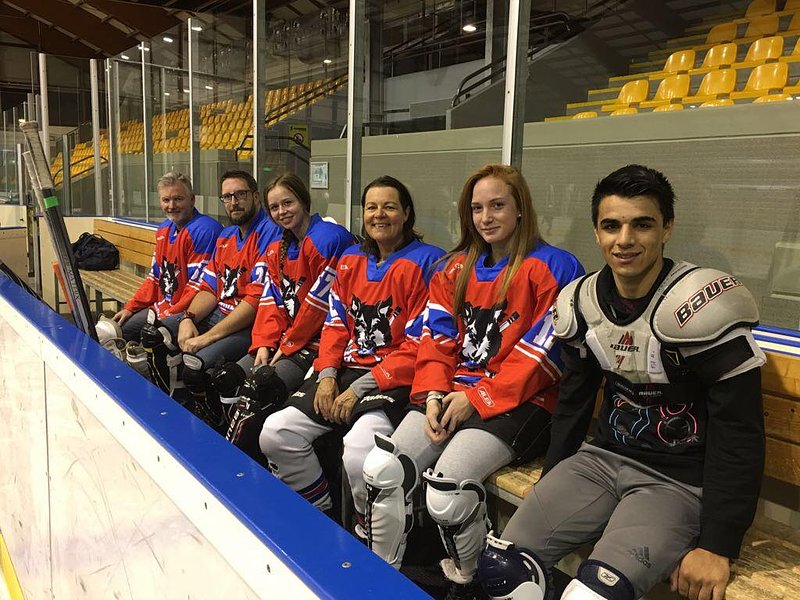 Of course, I’d forgotten how to dress for a sporting activity, and showed up with a fleece jacket covering my white shirt from work earlier that day (I had been so busy with domestic duties that I didn't even think to change), completely incongruous. I even forgot to bring along the obligatory water bottle, so went without hydration.

Basically, it was a humbling experience. A realisation that I was never that good a player, and that I had lost many of the things I’d been able to do once to cover for that.  But it was a lot of fun, and (providing I can figure out how to spend the least on fully-equipping myself), I’ll keep on doing it. Because if my son is so set on become a hockey player, it won’t do for his dad to not even try.

Have you ever had an experience where you took up a sport because your son or daughter was playing, or perhaps started playing a sport you’d long abandoned? We’d love to read about it and we might even make it part of an article.